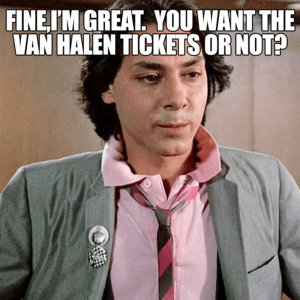 The “ideal” screenwriter.  Is it an impossible thing to aspire to?  I argue such aspiration is not only possible, but mandatory. Being great as a screen scribe isn’t easy, but the path has been clearly illuminated by not only the words and worlds of the great screenwriters who came before us, but by their living creations as well: their characters.  Or at least a small handful of our favorites, each of which, I feel, possesses some key, essential writerly characteristic, large or small or weird, that every screenwriter needs to become great:

On receiving script notes:  Be like Harry Burns (When Harry Met Sally)

In that iconic scene with Sally in the diner, as Sally fakes her big “o,” Harry sits there, patiently.  Fully aware from the outset with what Sally is trying to do with her public fake orgasm display.

When receiving script notes from people, strangers, friends, whoever – screenwriters must be Harry from that scene.  That is, they may be way ahead of the person giving the notes, as Harry was way ahead of Sally as he figured out what she was trying to do right off the bat, but they need to sit there patiently, and calmly.  They need to take their notes, professionally and respectfully, whether they plan to use them or not.

In other words, have what he’s having.

On pushing the art of screenwriting forward: Be like Howard Beale (Network)

Granted, not every screenwriter is interested in advancing the art of screenwriting.  But for those of us who are, we face an uphill battle.  Corporate goons answerable to shareholders who just want this quarter’s slate to make a 10% higher profit than last quarter’s, pinhead executives who think they have taste but don’t, mindless budget restraints… you name it and the art of screenwriting is constantly doing battle with it.

If we’re to stand any chance of pushing screenwriting and cinema forward as writers, we have to be like Howard Beale and get mad as hell.  And not take it anymore.  Don’t be bullied. Stand your artistic ground!  Remember how much progress cinema has made over the years, or even just in the 1970’s alone how far the craft was pushed with films like Mean Streets, The Conversation, and The Godfather.  Those days can come again, but only if we fight for it like the insane(?) Howard Beale.

On collaboration: Be like Edwina “Ed” McDonnough (Raising Arizona)

If you’ve done it, you know that writing a script with someone can be as frustrating as teaming up with someone to kidnap a baby.  But to keep it as productive as possible, you’ve got to have the soft heart of Ed McDonnough (Holly Hunter) which loves H.I. so much but knows when to up and take the baby if H.I. don’t change his ways and things go a little too nutty.

Channeling Ed’s soft, sentimental heart will guide you as you nurture your Lil Nathan Jr. (read: your script) and your H.I. (read: your collaborator).  Channeling her police officer buck-stops-here attitude will help you keep on target and get the work done.  (“Turn to the right!”)

On understanding human nature: Be like Rhett Butler (Gone With The Wind)

Rhett Butler loved Scarlett the more he became fascinated with how complex and perhaps devious she was.  He wasn’t charmed by her looks like the other boys.  He was a man of complexity, a man of experience, and a man above all who knew how people worked.  Or so he thought until he grew to love Scarlett.

Writers need to channel Rhett when creating characters.  If you can be like Rhett in real life, all the better, because it’ll mean you have a penchant for figuring out how people tick, how the world works, and how to benefit from each when they rise or fall.

On building a screenwriting network: Be like Mike Damone (Fast Times at Ridgemont High)

Damone was the go-to guy for everybody at Ridgemont High.  From the jocks to the punks to the freshmen.  He scalped tickets, he hooked people up (and knocked some people up – I’m looking at you Jennifer Jason Leigh), but most of all, he made things happen.

You need to do the same if you expect to build a network of friends and allies that can help your career.  Do favors. Don’t expect people to return them.  When you become Damone, you’ll find things just start to work in your favor.  Except maybe babies.

On taking credit:  Be like Tom Doniphan (The Man Who Shot Liberty Valance)

SPOILER ALERT:  Jimmy Stewart isn’t the man who shot Liberty Valance.  John Wayne’s Tom Doniphan was.  But he never took credit.  He let Jimmy Stewart take all the credit, and ride that credit all the way to a Senate seat and American legend.

Not only that, but Tom Doniphan let Jimmy Stewart take his girl as well.

If you ever find yourself in a scrape with someone over a credit, and you find yourself losing your integrity, your honesty, or losing sight of what matters most as you struggle, be like Tom Doniphan.  Let someone else take the credit.  The soul you save may be your own.

On moving to Hollywood:  Be Like Paul Atreides (Dune)

Arrakis.  Dune.  Desert planet.  Why would royalty like Paul Atreides and his family move intentionally to such a harsh environment, such a bitterly-contested warzone, such a hazardous stage?

Because of the spice, baby.

Hollywood is Arrakis.  Pretty much everything happens here. New York too.  And, yes,  other burgeoning centers of filmmaking too.

But there’s only one Arrakis.

Paul uprooted himself out of necessity to his family’s goals.  It wasn’t pleasant, and it wasn’t comfortable, but it was necessary.  You can’t rule Arrakis if you live on Caladan.

On facing impossible odds:  Be like James T. Kirk (Star Trek II: The Wrath of Khan)

Sometimes the screen characters we write get so backed into a corner, so tangled up in a knot, that it seems there’s no possible chance of escape.  And sometimes this happens to us screenwriters as well.

Remember the Kobayashi Maru scenario.  James Kirk won because he hacked into the computer simulation and changed it.  Cheating? Yes, definitely.  But it could also be looked at as “giving oneself a third option.”

Does it compromise your morals?  It’s up to you decide that.  But the adroit screenwriter will think of a third way out of the box, as will her characters.  Be always on the lookout for that option that nobody’s thought of yet, Captain.