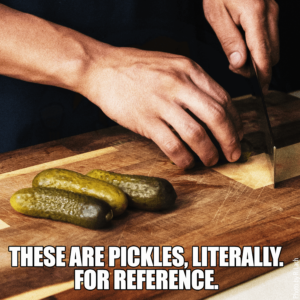 Somebody once said — I think it might’ve been Mel Brooks — “If your Act 3 doesn’t work, go back and rewrite Act 1.”

Every movie and film must start somewhere, right? If the movie doesn’t start, then there’s probably something wrong with the projector.

But if the feature-length film is 45 minutes into its runtime and yet it still feels like the story hasn’t begun, then the problem isn’t with the projector.

The problem is Act 1. Typically.

So what’s the most common glitch writers trip up on when writing Act 1?

They don’t put their characters in enough of a “pickle.” That is, a situation that appears to the audience to be extremely difficult or even impossible to overcome.

Remember, the purpose of a screenplay’s first act is threefold:

Another way to describe this is the establishing of the status quo.

It may seem tempting to skip such “setup” and thrust us immediately into the action in media res style. But the reason a screenwriter must take this initial page-space to convey the status quo (especially within the script’s first 10 pages) is that good film stories, are dynamic.

That is, they’re about change.

So the first job of the first act is to establish normality.  AKA, what life is like before the characters are in a pickle.

That normality is the status quo, and the audience needs to know what that is as soon as possible, so they can have a “point of reference” that contrasts significantly with the situation they find themselves in once they’re thrown into the “pickle.” (via the Inciting Incident, which I’ll get to soon.)

Does that status quo have to be boring? Hell no. Remember The Matrix? It opened with hella cool martial arts, and then showed us the humdrum status quo of Neo the office worker.

In both cases, the action is a bit of a tease. It serves as a good way of grabbing attention right off the bat, before establishing the baseline normal.

Act One’s Second Job — The Inciting Incident (AKA The Pickling)

But then, at or around page 10, it’s time to break that status quo. But keep in mind, we don’t want a half-assed break. We don’t want several little breaks. We want one good, solid thing that launches us into the story by disrupting the status quo.

In common screenwriting parlance, this is called the Inciting Incident or the Point of Attack or the OMGWTFBBQ moment. (Caveat: “OMGWTFBBQ moment” is actually not used by anyone, ever. That being said, neither is the term “The Pickling,” so just be aware.)

The Inciting Incident is simply this: A disruption of the status quo that puts the character/s into a difficult, if not impossible, situation. This disruption makes it clear to the audience that the established status quo might be something these characters won’t ever be able to return to. The further away or more impossible the writer can render that possibility, the more powerful the inciting incident, and, arguably, the more powerful the rest of the narrative.

For example, in The Hangover (2009),  the inciting incident is when they wake up without knowing what happened to their friend.

In Star Wars (1977), the inciting incident was Uncle Owen and Aunt Beru losing at laser tag to Stormtroopers (who go on to never hit anyone with a laser again. It’s a real tragedy for the sport).

In The Lord of The Rings (2001), the status-quo-breaking-event is when Gandalf tells Frodo he’s got to destroy some jewelry.

No matter how it happens, or where it happens, the inciting incident must happen,  and must happen soon, as it’s a vital part of a strong narrative.  It behooves all screenwriters to craft the best one possible, and make it happen as soon as possible, after the status quo is established.

Otherwise, the script ends up with an inciting incident that occurs too late, which could cause the audience to feel as if the movie never really starts. I’m looking at you, Suicide Squad (2017).

There are a few common mistakes writers make when crafting the best Inciting Incident possible.

With the status quo established and broken, the first act has one job left before it can end. The narrative torch must be passed to the second act.

So what the hell is the passing of the narrative torch?

It’s a metaphor I just made up (writer here) to represent the brief period of time in the script when the character or characters must decide how to proceed after the inciting incident.

What do you do when everything you’ve known has been destroyed?

How do you get back to the status quo?

Going to hop on a bus, Gus?

Don’t discuss much. Just get yourself free (of the first act).

Perhaps an example will explain better than cribbed lyrics:

In Role Models (2008), the main characters are a pair of man-children who have wrecked a monster truck by crashing into a statue or something equally ridiculous. These two dudes are now in trouble (inciting incident).

Forced to either go to jail or do community service with kids, the characters must decide how to proceed in order to return to their status quo. This moment is their figuring out of the pickle. Naturally, they choose the community service and a delightful movie about LARPing and whispering eyes unfolds. The narrative torch is passed to the second act.

In Star Wars, after Luke’s aunt and uncle are rendered extra crispy, he must decide what to do with the Death Star plans and the rest of his life. He chooses to deliver the plans to Alderaan and the rest is history (from a long long time ago).

In Toy Story (1995), once Buzz has upstaged Woody in the bedroom (Andy’s), the cowboy must decide how to get rid of this dashing space ranger. He chooses to knock him out the window, and thus the narrative falls with style into the second act.

First acts are more important than any other act in the script. How you start the movie, how you begin the screenplay, how you launch the story has an overwhelming effect on the rest of the film. Writing your characters into a “pickle,” or seemingly difficult or impossible situation, immediately sets up the problem, and immediately raises the bar for Act 2 and Act 3. The goal is to transmit to the audience: “The status quo is gone, and these characters are in a very difficult position,” then ratchet that up in Act 2 and 3 to “There’s a new status quo possible, but between here and there, there’s a seemingly impossible set of obstacles that the characters must overcome.”

TLDR:  brine your characters in Act 1, and your audience will love you by Act 3.