So I just fired off the first draft of my new screenplay to an actor, asking if they’d consider playing the title role. The actor confirmed receipt of the script via email and thanked me, then signed off with this email signature:

“Sent from my elitist iPhone.”

If you haven’t been living under a stale tuna bagel for the last decade or so, you’ll recognize that as a jab at the default “Sent from my iPhone” signature that many iPhone users include at the end of emails they send from their infamous “Think Different” devices.

But “elitist?” I’m not sure about that, but I know some of us can be a bit fanatical, and some even downright cultish and scary, about our Apple devices.

In any case, here’s a short list of screenwriting iPhone apps (and some for iPads as well) – apps which I believe should be a part of any discerning, elitist iPhone screenwriter’s library, if he or she hopes to continues to remain the better of, and more educated than, the peasants using all of those knuckle-dragging non-Apple devices. 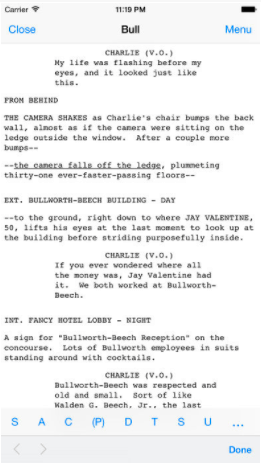 I’m an immense fan of FadeIn Pro, the screenwriting app for Mac and PC which is constantly being updated. What I love about FadeIn Pro is its seemingly endless array of features, from production revisions, to character lists, to index cards, to keyboard customization.

But what I love best is that it “speaks Final Draft.” That is, the desktop app is able to import FD files and export FD files. So I can deal with files sent to me by my clients and friends who still use FD, while working in the much nicer, sturdier, and more customizable interface of FadeIn.  This particular screenwriting iPhone app won’t import or export an FD file, and it’s a bit difficult to write anything on a mobile phone, but I can still recommend the FadeIn mobile app for anybody who works day-to-day with FadeIn files.

How I use the mobile app is mainly to read my collaborators’ FadeIn files, generated from the desktop FadeIn app, and shared in our Dropbox. That being said, for anybody on a budget, FadeIn Pro mobile is an affordable way to get going with screenwriting until you can get your mitts on a desktop machine or iPad and are able to fire up the full-featured Fadein Pro desktop app. 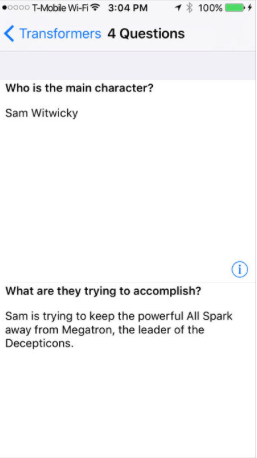 I’m not generally a fan of “story software,” but Contour seems to have its heart in the right. This little screenwriting iPhone app takes you through a series of questions that are designed to shape your story within a formula  down to its 12 most significant beats of Act One, promises to help you break down Act Two in a way that’ll never get you bogged down in your script’s “middle,” and assures you that the final beats of your  Act Three will deliver for your audience.

Quite simply, the app is geared towards formula. And while none of us like to think we’re “formula filmmakers,” Contour looks like it embraces formula in a way that’s designed to help you transcend it. 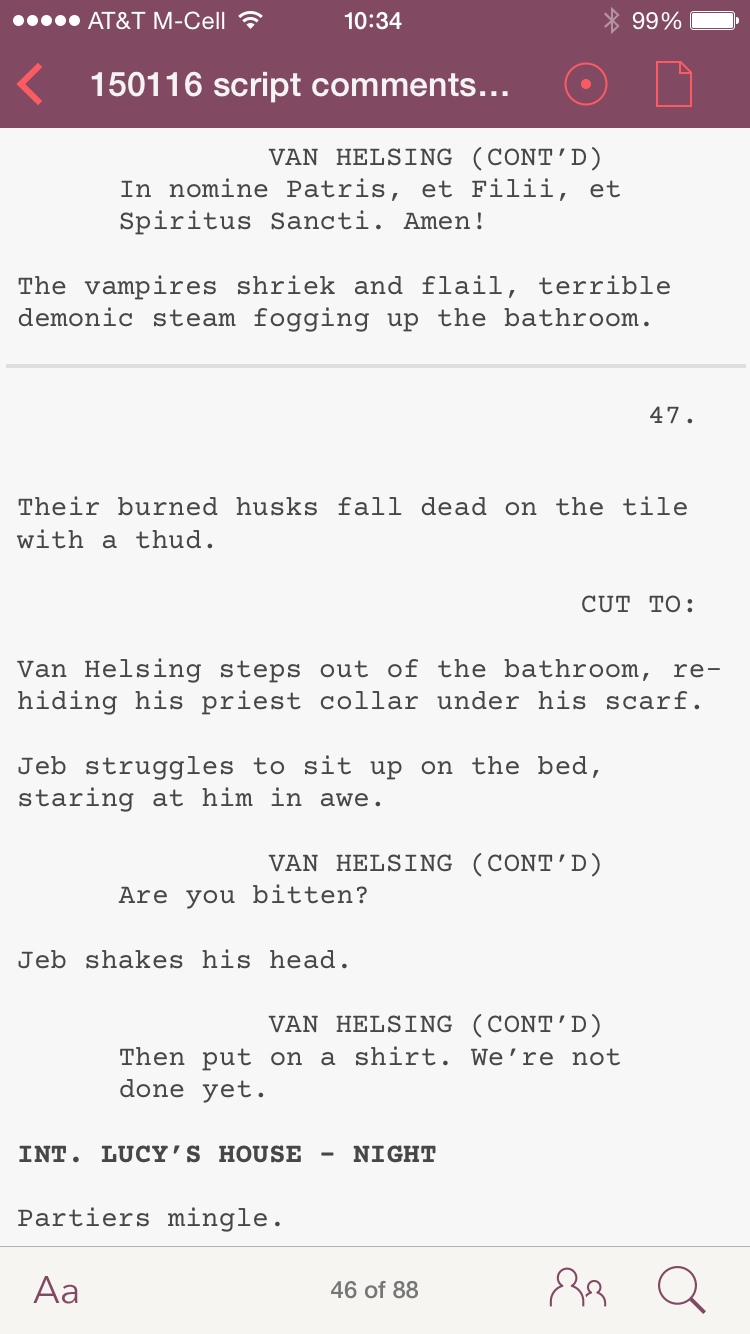 Introduced just under a year ago, and updated very recently, Weekend Read takes PDFs of screenplays and screenplays in Final Draft format and Fountain format and allows you to read them on your iPhone (sorry iPad users, this one is just for the iPhone currently). And that’s pretty coolish, if you ask me. Under the hood is some sort of bizarro converto behind-the-scenes magic that apparently requires a lot of processor power, so you’ll reportedly find that the app lags a bit on older iPhones. (PS if you have an older iPhone, you’re not invited to play polo with me.)

But with four different fonts to choose from, a Dark Mode to spare your sore screenwriter eyeballs at night, and the ability not only to import scripts from your Dropbox folder, but to jump around the script and highlight characters, this app is great for anyone who likes to read movie screenplays, but is an absolute portability upgrade for script readers and script analysts or anyone doing script coverage or script notes in the back of their limo, or in between signing autographs on the red carpet. More about portability in my article here.

The free version of the app comes with storage space for four scripts at a time only, or you can upgrade for $9.99 and load your Weekend Read up with what the website reports as “hundreds” of scripts, though I couldn’t find the exact storage amount anywhere on the website or iTunes app page. I’m assuming that “hundreds of scripts” means at least, well 100.

Another small downside is that the app is currently only available for iPhone, and like I mentioned earlier, the website reports that there is significant lag on iPhone 4 models, so you’ll probably need an iPhone 5 or newer. But since you’re an elitist screenwriter, you can afford that. Simply divert a fraction of your next massive royalty check from your Transformers ghost polish, darling.

Final Draft will likely be the center of the known universe for the foreseeable future, when it comes to writing and editing screenplays in this wacky, dog-eat-face film industry. And in the  department of screenwriting apps for iPhone (Despite there being a number of great free and cheap alternatives to Final Draft, as I illustrate here.) As a result, no matter what platform you prefer to write your scripts on, you’ll inevitably need to read a Final Draft file (FDX) on the fly, whether you’re asked to collaborate, or to beef up a script, or to take a peek at a shooting script’s scene numbers or pink pages.

The app is a breeze to use, allowing you to highlight characters, print the screenplay from your iPhone, make notes, shift into a view that shows you what the printed page looks like exactly, and allows you to adjust the font size, as well as search. (These sorts of features are commonly used by elitist, iPhone-using screenwriters, so you should consider using them as well.)

Final Draft’s current ubiquity is the key reason Final Draft Reader is mandatory for any serious working elitist screenwriter, but this app’s core features are nothing to sneeze at. If you do sneeze, please cover your mouth, as it’s flu season and the last thing I need is a peasant cold.

I’m a recent convert to index cards. I used to eschew them, citing them as a block to creativity, or as an excuse to feel like you’re busy, but alas, I’ve drunk the Kool-Aid™, and now find them an indispensable boon to my writing process, especially when it comes to screenwriting collaboration (as I emphasize in my blog post here.)

Any elitist, iPhone-using screenwriter like me will agree that regular index cards can leave your fingers smelling like, well, index cards. But moving all of that tactile, calorie-burning finger labor into the cyber realm on your elitist iPhone relieves you of all of that muss and fuss, and saves your overpriced, live-in manicurist oodles of stress.

This app, the plainly monikered “Index Card for iPhone,” allows me to save the recycled paper and eraser burn and “fingers that vaguely smell like wood pulp” syndrome and do all my cards virtually.  It’s almost as easy as shuffling around hedge funds with my pals in the Hamptons, all of whom have iPhones.

That being said, the real value of using index cards, I’ve found, is their innate predilection to be shuffled and reorganized on a flat surface, non-linearly.

And yes, this app allows that, shipping standard with the option to drag and drop cards before and after each other, but ultimately, it lacks the function to see all the cards laid out, as you would with real cards on a real life corkboard.

But with the ability to convert to RTF or plain text, and copy the cards to Dropbox, or email them, you can import your index cards into virtually any modern word processor and print until your heart’s content. And since you’re an elitist, iPhone-wielding screenwriter, you can afford all that ink and paper. Can I get a bourgeois amen?

Other features include the ability to sync with Scrivener’s OS X app and display the cards on an external HDMI monitor (using at least an iPhone 4s and the Apple Digital AV Adapter). (Non-iPhone users, HDMI is an expensive, elite audio-visual interface. If you’re not using an iPhone, you probably can’t afford anything with HDMI in it, so you can go ahead and skip the above paragraph and go back to eating cake on your Blackberry.)

Alas, my fellow upper crust screenwriter, even before you’re even remotely ready to make index cards, let alone write the screenplay, you’ll mostly likely be in brainstorming mode, right? And I have just the app for you to install, alongside your Caviar Finder app:

Mindly is a free app that helps you brainstorm by way of…. wait for it …

If you don’t have a mind (non-Apple device users), or are not familiar with mindmapping, it’s basically just an exercise that allows you to organize, or “map” your thoughts, in relational, visual way, usually via flowcart-esque graphics such as bubbles and boxes and lines.

Mindly allows you to create a bubble with a thought – any thought you type – and then branch that thought out, or in, or in any direction, by adding related thoughts or ideas.

Think of it like outlining, but in a more free-associative way. If screenwriting is giving birth to your spoiled child, and index carding is painting the nursery with ink made from gold and endangered tiger blood, think of mindmapping as the act of you and your elitist mate on your yacht, finding a quiet lagoon near St. Kitts, and making mad, passionate, elitist love to one another.

Granted, I’m not sure the designers of the Mindly app would like it put that way, but that’s how I see it, and because I’m an elitist iPhone screenwriter, I’m stickin’ to it.

Not to mention Mindly’s interface is intuitive and easy to master, and has definitely helped me, if not have sex on my $3 million yacht, at least break a few writers blocks.

Better still, it’s on your iPhone, so instead of using bits of small downtime to check in with your Swiss bank, or to purchase first class airline tickets, or to purchase smarter designer boots to put on the faces of the poor and ignorant (any non-Apple device screenwriter), you can simply brainstorm!

Finally, there’s lord and master of the filmmaking app universe, Dropbox. And if you haven’t installed Dropbox yet, as your compatriot in elitism, allow me to emphasize:

Put down your elephant steak and 80-year-old cognac and install Dropbox immediately.

It’s quickly becoming, if it hasn’t already become, the most ubiquitous cloud storage app on the planet, and an essential app for not just screenwriters. Productions, studios, casting agents – everybody’s getting on Dropbox. Storing files, sharing files, passing back video and music, production photos, location scouts, schedules, scripts, film budgets – you name the film industry profession and Dropbox is helping provide a solution for it.

Yes, there are other cloud file storage solutions, but Dropbox is the best, at least at the time of this writing. So as a working screenwriter, or even an aspiring one, you might want to consider having this little app in your pocket.

And the good news? Unlike the apps above, you don’t need an iPhone. Dropbox loves its Android users just as much.