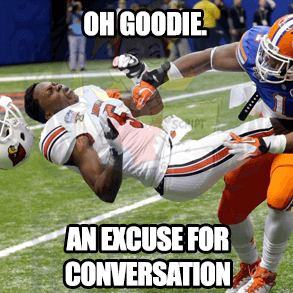 The character of Dante Hicks from Clerks once said to his friend Randal: “You hate people!”

To which Randal replied “But I love gatherings.”

And I can’t think of a more appropriate description of my relationship to the Superbowl, and/or the sport of American Football as a whole.

The game, from soup to nuts, is an exercise in dumbism. Meaty men throwing themselves at each other, kicking faux pigskin around a patch of grass – at first blush it might seem like some sort of dating ritual for men who happen to like tight pants and bright colors and pain.

But alas, it’s a sport. And a mighty sport. A sport so mighty, it comes with free brain damage.

And I’m the last person in the world to watch something like that, but I too, like my friend Randal, love gatherings. I love anything that passes as a communal hearth in these too-connected, disconnected, internetty, Instagrammy times.

So I watch it. Year after year. But please don’t ask me anything about football, teams, rules, or which player socked his wife in the mouth and got off scot free for it. I’m not that kind of prevert (sic).

See, I’m a screenwriter. So I find gold everywhere I look. Lumps of coal that can be spun into, well, gold, when it comes to screenwriting. And pardon my mixed metaphor. I’ve been tackled too many times.

Not convinced? You shouldn’t be. I’ve barely begun to sculpt my point. But here’s where I’ll begin: Five good reasons screenwriters should watch the superbowl.

I know. I know. It’s a slow news day, mon frere. Please, just go with me. Grab your bag of corn chips, plop onto the easy chair, put on that muu muu you call a “team jersey” and go with me.

#1 Tune In To Pop Culture

If you’re like me, you spend the better part of your TV viewing life eschewing shows like Entertainment Tonight and idiotic local news and idiotic movies of the week and idiotic network sitcoms for idiots who are idiotic.

Further, if you’re like me, you watch stuff on your Netflix, your Amazon, your Roku, your Apple TV, your motorized hamster impersonation device, etc.

In other words, dumb TV doesn’t interest you. Mostly.

But what we gain in culture, taste, art, and intelligence by sticking to our slightly less-dumb HBO and Netflix shows, I argue we lose when it comes to keeping up with a vast swath of pop culture.

That pop culture is playing out every night on network TV. The idiot sitcoms, the idiot entertainment news, the idiot talk shows, judge shows, doctor shows, crime scene investigation shows, you name it.

And not only the shows themselves, but what goes in between the shows: the commercials. And what goes on the shows sometimes: the little graphic bugs at the bottom of the screen, essentially serving as advertisements during the program you’re watching.

I’m pulling my hair out just recounting this all for you, gentle reader persona.

But alas, that pop culture, however stupid, however dumb, is, well, popular. And movies get made these days, for the most part, based on how popular their originating product or initial media form is. (Notice I’m skipping completely over the concept of making movies based on original screenplays, as at the rate Hollywood is going, original screenplays appear to be facing the same general expiration date as the polar bear.)

Corporate sponsors blasting across the 50 yard line every time there’s a down, players emblazoned with Nike logos in each and every shot of the game, commercials that simultaneously stupefy us and amaze us (more about them later), and mindless comment after mindless comment from announcers, players, coaches, refs, and fans, all “giving their 110%.”

If you’re a screenwriter looking to mainline pop culture the way a vegan mainlines a McDonalds burger on that one precious day out of the year, you can do no better than the most epic event in modern sports.

Are you a wordy screenwriter? Do you fill your pages with too-long description and wave after wave of Tarantino-wannabe dialogue? Do you think your 140 page script is the perfect length and say “suck it!” to studio heads and other know-nothings who suggest it might be a hair too long?

In 2012, a 30-second commercial spot in the Superbowl would run you a cool $3 million. Now, who knows how much? But you can bet that rate isn’t going down much.

So do you think a world class company spending $3 million plus for a 30 second spot is going to hire morons to produce their commercial?

Don’t answer that. I will.

The answer is: noooo. (Despite whatever opinion you’ve brought, and despite the temptation to say “yes.” Don’t deny it.)

Those 30 seconds have to be jampacked with eyeball-crushing, soul-melting, heart-warming amazement. You can bet they’re spending every dime they’ve got on making sure that that happens.

Brief, killer, and awesome. That’s what most, or at least many, Superbowl commercials are.

And we screenwriters can take a lesson from that: If these corporate dingos can get their point across in 30 seconds in a way that makes your head explode and your lungs burst with laughter, you damn well at least get your script’s page count down to 90 pages.

The setup is classic: two teams battle it out. Teams that have already battled it out, beat out other teams to be there.

Why’d they do it? Well, because it’s a multi-billion-dollar sport and they got paid to do it, ultimately for entertainment purposes.

Yet what unfolds on that gridiron is real. Real drama.

Maybe it’s the zeitgeist. Maybe it’s the shared moment of hivemind millions of Americans are experiencing that gets us all riled up inside. Or, maybe it’s them arbitrary stakes. You know, the stakes which say “If this team over here doesn’t make it, they still get paid millions of dollars, but a few million dollars less than the other team. Oh, and everybody gets to try again starting in about 7 months from now.”

Whatever the reason, the audience is moved. If you’ve learned everything you can about screenwriting, then you have nothing to learn from watching an audience be moved by something.

But if you’re like me, a journeyman screenwriter of 25+ years, someone who knows a thing or two about screenwriting and bases his living off of it, you’ll agree there’s probably much left to learn.

Have you ever had a conversation with a fan of American Football? Fan intellect runs the gamut, from Forrest Gumps to Einsteins. But there’s one thing they all seem to have in common:

They all are grounded in this completely superficial, completely arbitrary national game. A game which has no real stakes and no real lasting outcome.

But most importantly, they talk about it.

And you, as a screenwriter, might want to listen.

Not because you’re learning about the game or the details or the many sundry trappings that invariably any American Football fan is hugely capable of rattling off ad nauseum.

But because you’re a screenwriter, and screenwriters write dialogue. And write about ideas. And render three-dimensional characters. And learn the rhythms of human conversation.

If you can start up a conversation with someone, you can learn, as a screenwriter.

And if you watch the Superbowl, you increase your chances of being able to talk about something with someone – to have something in common enough with someone to carry on at least a limited conversation.

#5 Motivation to Be Filthy Rich (minus the brain trauma)

And if my appeals to learning how to listen, growing as an arteest, etc. etc. don’t resonate with you, then at least watch the Superbowl to bear witness to one of the most gluttonous, most heinous, most visible and ornate squandering of human wealth and resources short of the Wall Street bailouts and oil company giveaways and whatever explosively massive teat the US military-industrial complex is milking this week.

The player limos. The commercials. The big board. The halftime show featuring Elvis Presley come back from the grave. The owner suites. The fancy suits. The gold trophies.

And if that motivates you – if sheer, unbridled spending and wealth motivates you like nothing else – and that’s quite possible, and nothing to be too ashamed of – as many a screenwriter gets into the business in order to make it big, fat, and moneyed – look to the Superbowl. You’ll find all the baubles and trimmings of excess you’re looking for.