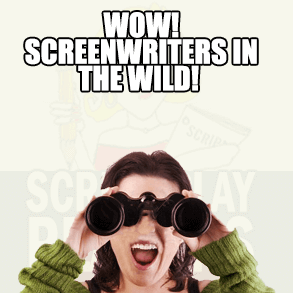 Classifying the myriad types of screenwriters out there has been a task that’s eluded science since the dawn of cinema.  But me and my team from the University of Screenplay Readers has been able to compile and catalog, at long last, these unique creatures.  And we’ve put them in our blog.  Because that’s what scientists do.

In my Field Guide To Spotting Screenwriters In The Wild (Part One), I was able to classify several major species of screenwriters you may encounter in their natural habitats.  I now continue that work in part two:

The Auteur spends most of her days storyboarding her screenplay.  She’ll spend 2 weeks writing it, and 9 months storyboarding, or creating high-tech video animatics. Shot by shot, this screenwriter has her film planned down to the T.  Every camera movement, every special effects shot.

More often than not, the Auteur couples with a non-Auteur variety of screenwriter and is able to bring more flesh and textual /structural craftsmanship to her screenplay, but it should be noted that there are those rare mutants of Auteur who are able to write amazing scripts by themselves while managing also to go balls-to-the-wall with their visuals, animatics, and storyboards.  That being said, there are also Yetis.