Terrible screenplays. Ugh. Sometimes, we script readers get lucky.  That is, when we dig into a screenplay to give script notes or do script coverage, sometimes we know right away that the script we’re reading is gonna be a painful read. Just a terrible, terrible screenplay.

Most times, that takes us a few pages.  But sometimes, right off the bat, we get some really great clues that let us know “Hey, this screenwriter might not yet be ready for prime-time.”

The obviously poor screenwriting is, well, obvious. “Murder Scene” doesn’t say anything about where the movie takes place, “During this scene” is about as junior-high as it gets, and “We hear” and “We see,” while on the border of acceptability, (and debated in a few screenwriting circles), when compounded with the first two glaring muckups, are complete “perceived professionalism” killers.  Not to mention we’re staring down a huge block of black ink at the very beginning of the script, and that black ink isn’t very concerned about saying as much as possible with as few words as possible.  It displays a lack of respect for the reader’s time and eyeballs, and comes off as less-than-adroit writing.

#5  “I’m not paying attention, so neither should you.” 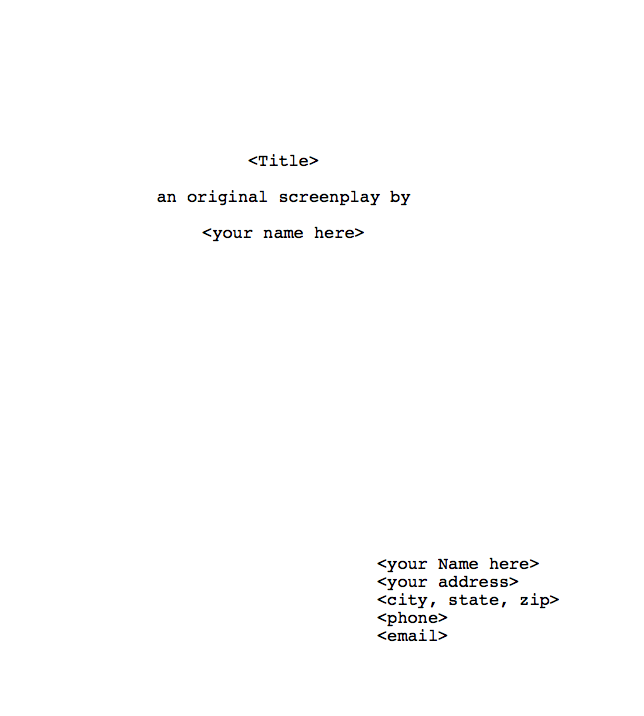 Scripts with these default title pages come in every single day here at Screenplay Readers. Usually it’s a result of the Export-to-PDF function of Final Draft or other screenwriting software suites when the screenwriter doesn’t bother filling out the title page information, and selects “Include Title Page” in the PDF export.  It’s such a simple little thing to fix, and yet so many screenwriters ignore it, and send in these screenplays with “Mystery Meat” title pages.  If you’re trying to look like someone agents and producers shouldn’t take seriously, this is definitely the way to do it.

This just in, campers:  Architects are to buildings as screenwriters are to motion pictures.  They both create blueprints, from which, very complicated things are built. Imagine if an architect slapped together blueprints for a building and stuffed all the plumbing measurements into the completely wrong area, or used language that confused the contractors.  They’d probably have the same reaction studios and agents have when poring over a less-than-professional spec script to consider for script development.

If you don’t understand what a scene header is, or what it’s supposed to convey, you can’t be a screenwriter. The screenwriting DMV needs to revoke your license.  If you want to be taken seriously, learn how to correctly “draw up the blueprints” for film, Mike Brady.  Camera angles, long, rambling sluglines – these are the instruments of the hackateur film architect.

#3  “We see and hear an amateur screenwriter, running towards us…”

Can you spot the hackness in this picture?  It’s not super-apparent at first blush.  But when you read more of these types of paragraphs going forward, the patterns soon emerge.  First up: “The figures run towards us,” “We see…” – Forgivable, perhaps, but when the script is littered with “We see” and “They run towards us,” it kills the eyes and adds needlessly to the word count. Good scriptslingers don’t do that.

Next, “…a five time Academy Award winning Actor.” Okay, if you say so.  But tell me this:  What, from what the audience sees or hears, lets us know this guy is such?  Screenwriters with chops only write what we can see or hear, and they don’t tell us that we’re seeing it or hearing it.

Confusing your reader in the first two lines of your script is generally considered bad etiquette, mkay? In this example, we’ve got “Sand Topia Beach” – okay, fine, proper noun/named place. No problem.  Then we’re told there’s some mosquitoes. Fine, fine.  But wait, no, maybe they’re not mosquitoes, because the screenwriter has called them BLOOD HUNTERS.  Okay, wait.  Are these special mosquitoes or something? Robots?  Mutants?  No, wait, they’re employees.

And then the next line is a whole lot of long, descriptive text that implies these things are large, but isn’t really clear about that, so I’m still in the dark, in the park, with Mark, on a lark.

Ambiguity in a screenplay or a motion picture is okay.  Sometimes. Sometimes.  But confusion?  Never.  And on page one, line one?  Verboten. 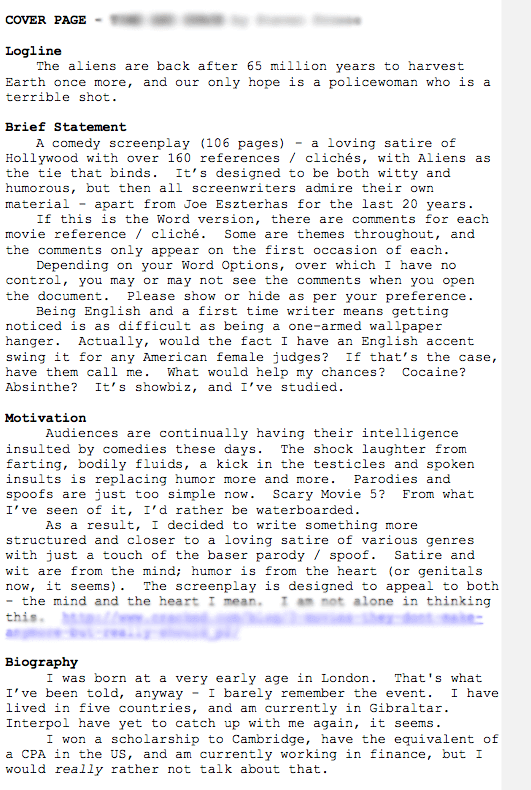 Isn’t that cute?  The screenwriter opens his screenplay with a one-page, 10-point font rambling treatise on why/how we should read his screenplay. His, well, terrible screenplay. The result:  I’ve already thrown it across the room (I go through a lot of laptops that way.)  Not only does he tell us how many pages it’s going to be (as if turning to the last page to find out is too much work for us script coverage types), but he tells us how to show or hide the comments he’s contained within the script’s Word file.  His comments.  In the Word file. As we read.  Line-by-line.

And to top it off, he gives us his cutesy bio, complete with the cliche “I was born at a very early age…”  This sets up the read perfectly by letting us know that what’s to follow is most likely gonna be a series of bumper-sticker slogans and tropes strung together by a guy who feels that in order to understand his screenplay, we have to read along with his line-by-line Word comments.

What this evokes: Muppets, backstage,  hamming it up with Christopher Reeve, then it’s suddenly showtime.

Choose now, scriptslinger: Be a cute Muppet or be a screenwriter.