Today I jumped into a new online screenwriting app called Writer Duet. It’s main feature is that two or more screenwriters can log in to Writer Duet, for free, and edit the same exact script on the screen, in real-time, as each single character is typed by each of the writers.

But while punching in a test script, it occurred to me that this webapp was not just a collaboration suite.  It’s a pretty nice little screenwriting software package for single writers as well, and with future development may even prove a viable Movie Magic Screenwriter alternative.

The collaboration part works pretty well.  Nothing like having my writing partner jump in and be editing one part of a page while I’m typing in the next, again, in real time.   And the two writers don’t even have to be on the same page.  I could be on page 10, and my partner on page 1.  Whatever revisions he makes, I’ll see in a little red highlight box when I scroll up to that page, and the same for him regarding my revisions.

To get my partner to join, it was a simple click.  I then entered his name and email and an optional note, and poof.  Writer Duet invited him, and within a few minutes, he was in.

Also, you can tell when your partner has the open script you’re working on as his active window.  Anybody clicked into the script (as opposed, to say, having the window open, but clicking inside your email program elsewhere on your desktop screen), shows up with a GREEN icon next to their name.  Anybody not clicked in, the icon is red.  I know, little stuff, but immensely cool.

Writer Duet’s responsiveness was nice and, and its key commands were fairly intuitive (tabbing to select among character, parentheticals, dialogue, etc.).

When on a line and I tab, it cycles through SLUG (Writer Duet calls it SCENE), ACTION, and CHARACTER. So the formatting of the line I’m on is determined by whenever I stop tabbing, just like many popular offline screenwriting programs.

What’s more, I intuitively hit APPLE-S to save my work, and, yep, it saved.  As simple as that sounds, it’s not that common, even now in the 21st century, to find a screenwriting webapp that responds to keystrokes, let alone combo keystrokes.  And it turns out, it’s not even necessary, because every change is instantly saved automatically (with a full history so you can always see the older versions). The Command-S archives a backup copy on WriterDuet’s servers, and lets you tag a revision for future reference. But going back to keystrokes, they also work to bold and italicize stuff, just like a real live word processor.

And also, when switching to Dual Dialogue mode (which, yes, it has, while many screenwriter software packages don’t), I found that Command plus an arrow key got me back and forth between the two talking characters with ease.  I didn’t look that up in the docs; I just tried it, and it worked.  When software responds like this, especially a webapp, you know the designers have put in some thought.

The last big cool feature I really dig about WriterDuet is its plethora of mouseover tips.  Mouseover a certain icon or command and it tells you not only what it does, but in some cases tells you how to do it in the most professional manner.

For example, clicking on the Format tab up top takes you to this screen: 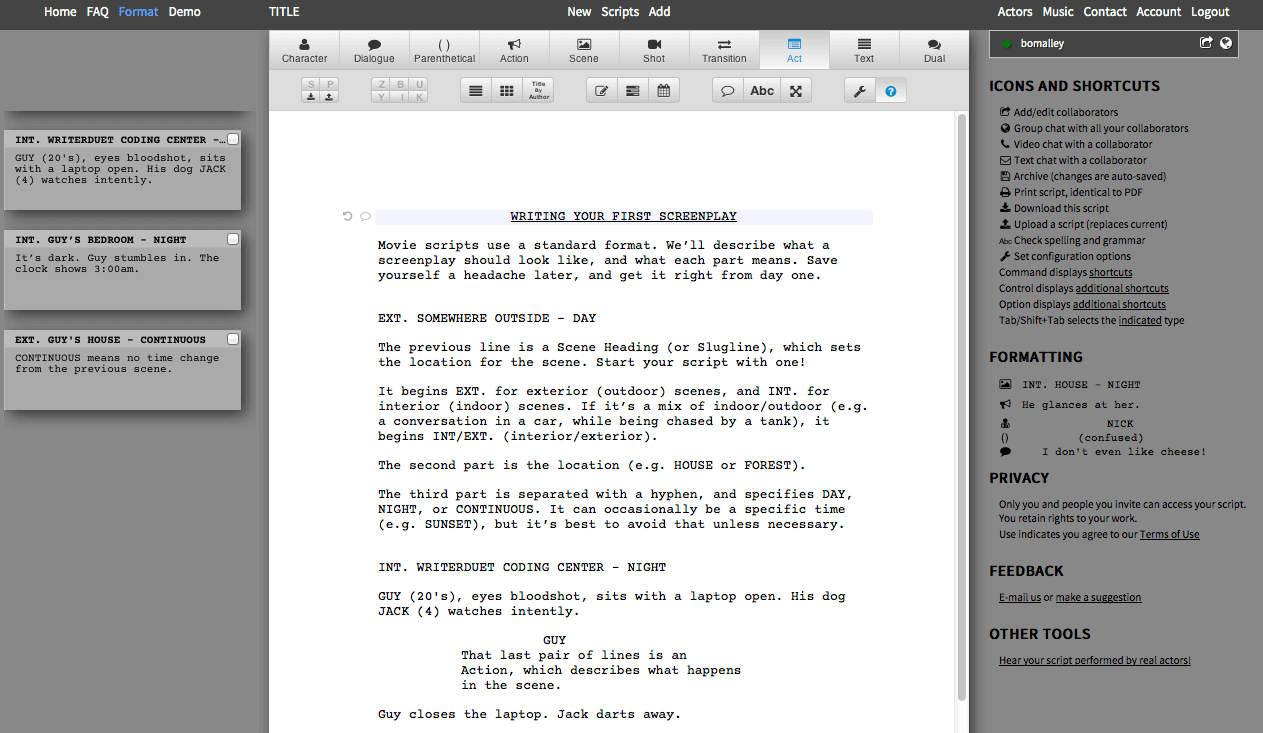 It’s not only a guide of how to format your screenplay, but tips peppered through the documentation on how to write more professionally and presentably.

Some of the minor things I could live without, but other folks might find cool include the video chat via the 3rd party video chat provider TokBox and the built-in music player.  If you’re gonna viddy with a collaborator, Skype or Facetime already handle that extremely well, and Tokbox seems rather clunky.  And as for a music player, who needs one in a screenwriting program when most modern OS’s have them built in?

Another thing that seemed unnecessary was the ability to have your script read by computer actors OR real actors via a separate integrated interface. I’m a bit old school, so the reading out loud thing doesn’t appeal to me, and again, borders on mission creep/software bloat, but I can see how it might appeal to other screenwriters.

PDF export, scene numbering, scene navigation, import/export from Final Draft, Fountain, Celtx, format for screenplay/tv sitcom/stage play, instant page size change for our friends across the pond, and all the features you’d expect from a major player in the screenwriting software space.

CAVEAT: Recently, a similar online screenwriting platform you may have heard of, Scripped.com, basically imploded, taking 5 years of their screenwriter clients’ screenplays with it. Seriously. The entire userbase of Scripped.com lost all of their data. Scripped had no backup, or the backup went wrong, or who knows? The designer of Writer Duet stepped in and made some sort of affiliate deal with the owners of the now-defunct Scripped.

There’s a long, detailed Reddit exchange here, if you’d like to get more details on the Writer Duet / Scripped connection.

In addition, since publishing this article in November of 2013, long before Scripped and Writer Duet made whatever deal they made, Writer Duet has now started offering a paid version of their screenwriting app.

Bottom line: if you’re going to work on Writer Duet or any other web-based screenwriting platform, make sure you’re up for the risk of keeping your screenplay in the cloud. Triple backups, local, remote, you name it. It’s the only way you can make sure your screenplay, and all the hard work you put it into it, doesn’t vaporize should the company pull a “Scripped.”

2 thoughts on “Review of the Screenwriting App Writer Duet”