As a screenwriter who likes to use screenwriting apps, you wanna know what I’m most wary of?  Reviews like this (click for picture)

Final Draft is a great program.  I use it a lot.  But the review site I found this comparison graphic on seems to think there’s nothing about Final Draft that could improvement, giving it a 10 out of 10.

I gotta tell you, I was part of the beta for Final Draft 9, and I can assure you that even the makers of Final Draft aren’t so smug as to feel their app has reached 100% perfection.

But what’s even odder…. Zoom over to the far right and you’ll see Slugline, a fairly new screenwriting program for the Mac.

See, that’s the kind of, well, vast discrepancy that makes me, as a screenwriter and a screenwriting blogger, curious.  To say the least.

So I downloaded the demo for Slugline onto my 2009 Mac Pro and gave it a whirl.

And my opinion?  Whoever gave Slugline a 4.10 didn’t bother opening it.

The Slugline demo was easy to find on the modern, simple Slugline website, and easy to download and install.

The first thing I do with any screenwriting software is start writing, to see how intuitive the interface is, how well the keyboard commands respond, and to see how quickly I can get “beyond the app” and into the screenwriting zone.  Because that’s really what it’s all about when I’m looking for a screenwriting program: how fast I can go and how unobtrusive the app is.

Slugline is great for jumping between character and dialogue

Slugline is pretty damn intuitive.  Tabbing, hard returns, going back to reformat a line of action as a character name, stuff like that, all easy peasy.  For those of us used to Final Draft, you might experience one or two minor hiccups in the flow, but your brain quickly remaps around the one or two non-Final-Drafty keystrokes you may experience.

For example, instead of tabbing through from SLUG/SCENE HEADING to ACTION to CHARACTER, you simply type, and the program understands what you’re doing. Start typing “INT.” or “EXT.” and your line turns into a scene heading.

It’ll start out justified to the left, like an action line, but once you type the name, any name, and hit RETURN, it knows if it’s a character name, and justifies it towards the center, like propah.

Minor little things like that make its flow slightly different than Final Draft (read about my free alternatives to Final Draft) or Movie Magic Screenwriter, but like I said, your brain remaps quickly around them, and it’s worth it, for a number of reasons:

Slugline is text-based and non-clunky

The first big reason I like Slugline is that it’s based on the Fountain markup, which lets you use any simple text editor, even your TextEdit program that comes standard with OS X, to write and format screenplays.

“Wait. What are you talking about?  Every screenwriting program is based on text.  Isn’t it?”

Actually, no.  Final Draft, Screenwriter, and many other apps use proprietary file formats to “wrap” your screenplay’s text within.  Sure, it’s text, but to get to it, you pretty much need to use one of their apps to open it. (Or do a bunch of convoluted exports/imports and other workarounds.)

Whereas Slugline, and other apps that use the open-source Fountain markup, allow your screenplays to be written, opened, and edited in any text editor, whether it’s the free Notepad on Windows, or the free TextEdit on OS X, or suites like OpenOffice, or even in the bloated and increasingly dysfunctional Microsoft Word.  Text is text. But text wrapped in a proprietary wrapper… Well, it’s not really text.

Whether or not that’s an important distinction really comes down to personal choice.

If you work with a paid mainstream screenwriting app, you’re likely need that app to open and edit your screenplay file. But if you work with an app that at its core treats your files as plain text files,  your work is liberated.  You can open it on many different platforms, as opposed to having to open it one paid software suite.

While I love my mainstream software apps, and use them extensively, if I ever decide to stop to using them, or if the companies stop updating them, or the apps no longer work on my future OS or hardware for some reason, I’ll have to find workarounds to get my screenplay out of the old proprietary programs and into a new, editable version.  (Anybody still using Scriptware?)

Slugline’s embrace of the text-ethos and the Fountain markup allow a lot of cool features that that a regular Joe Screenwriter might not find all that useful, but which I find pretty neat.

First and foremost is Slugline’s ability to OMIT or “comment out” a scene, (to use a programming term). I know, I know, Final Draft has the ability to omit a scene from a lined script for breakdown/scheduling/production purposes, but the omit function in Slugline works a little differently, and is less of a production feature than a writing feature.  Take a look at the screenshot below. The blue text is an action line, on which I simply right clicked and selected “Omit.”  The blue text won’t appear in any PDF or printed version of the script, but can serve as a collaboration note to your co-writer, or as a reminder to yourself, or even as a complete alternate scene or sequence.

Another thing I like about Slugline is its uncluttered “Outline Navigator.”  Many other apps like to bog down their navigator-esque panels with either the first line of action text under the slug or other stuff.  Me, I like just a simple, clean slug listing. 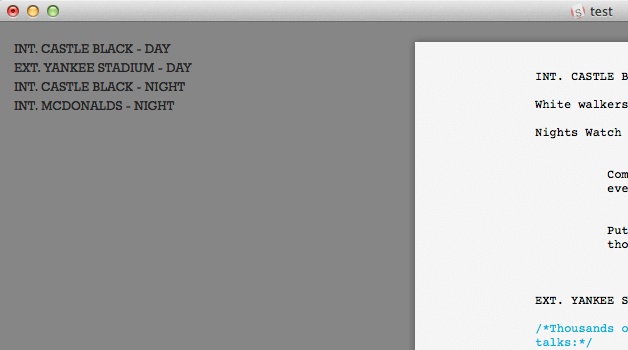 Also super cool:  COMMAND-+ and – zoom in and out.  Intuitively.  I know.  Minor thing, seemingly, right?  But for me, those hotkeys beat repeatedly having to do the drop-down menu just to get a new zoom level each time I go from laptop to desktop.

Exporting a file from Final Draft as both TEXT and TEXT WITH LAYOUT and then importing it into Slugline had wonky, unusable results.

I couldn’t save my script as a PDF, nor access the Preferences panel in the demo version, two things which aren’t completely out of left field for a demo version.

Exporting from Slugline as plain text, and then importing into Final Draft 9 worked fine, but once in final draft, all of those “omits” I was raving about above showed up as visible text in Final Draft.

And a final nitpick, once in full screen mode, ESC didn’t let me get out of it.  I know, I know. CTRL-COMMAND-F is sort of the de facto way you go about that sort of thing, but one can’t deny ESC is also a pretty common way of busting out of full-screen mode for many different apps, including browsers, and it seemed to be a missed instinctual touch for Slugline.

Slugline measures up impressively to the bigger, more popular screenwriting programs as far as features. When it comes to usability, it’s not difficult, but it does have a few things to get used to if you’re shifting over from Final Draft or Movie Magic Screenwriter.

Where Slugline is strongest is in its embrace of the Fountain markup and the platform-free, text-based ethos.  This makes it a strong candidate for wider adoption by screenwriters in the future, as I believe the proprietary text wrapper model is quickly becoming obsolete. For the businessman in me, the question is “Can either of those two models remain profitable?”  For the screenwriter in me, the question is “How come the big screenwriting programs don’t let me tinker and future-proof like Slugline?”

And as far as that review up top, where Slugline rated a laughable, obviously skewed 4.10 (probably some shill with an affiliate account), I give Slugline a very solid 8.0 with room to grow.  Check it out for yourself at Slugline.co

1 thought on “A review of the Mac screenwriting app Slugline”