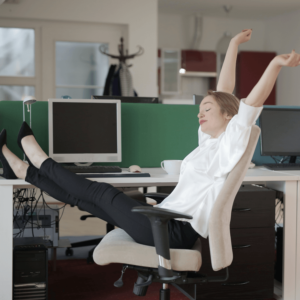 There are screenwriters who write one script, mail it off to Hollywood, and sell it for $500k.

And then there is the rest of us screenwriters with day jobs: working our butts off in the trenches, slogging through bills, slaving away at some soul-sucking day job so we can pay the rent and keep writing our screenplays, working towards that “big break.”

If you’re up for contemplating a career change, finding that perfect screenwriter day job which can boost your skills, harden your resolve and build your character, or even plug you in with powerful contacts, take a look at my list below, where I’ve enumerated my five best day jobs you can have as a screenwriter – jobs that, yes, will keep you working and the money coming in, but also have specific fringe benefits to those of us interested in landing that first big script sale.

First off, if you’re dead set on being a wage slave, chasing dollars for the sake of supporting your lifestyle, or simply to pay off massive student loans or other debts, take my advice:

That is, if you’re slaving away at a day job because money is your key priority right now, or because money is the big obstacle keeping you from pursuing your screenwriting… Get a high-paying day job.

(For the record, I think pursuing money is perhaps the least important, least valuable thing you can do as a screenwriter of any rank.)

But my point is simply: if you’re chasing your tail for money because you feel you have to, at least go big and max out your salary however you can.

And another key component of this: make sure the job is in Los Angeles (or any other viable “film town”), and preferably film related. The contacts you meet in any other industry aren’t going to be nearly as helpful as those you meet in the film industry.

As a Hollywood / film industry temp, you pick when you work, or when you take a week off to write. Generally speaking.

Some very talented screenwriters I’ve known (some of whom are WGA members even) have stayed afloat in leaner times between writing gigs by temping at studios or other film-related companies. And there’s nothing wrong with it.

The only downsides are: the work is usually tedious, and valuable friendships are slightly tougher to build due to the fact that you might not be working full time.

Boost your screenwriting chops! Reading scripts for a living, either part time or full time, is one of the most valuable things you can do as a screenwriter, with regards to your skill set.

There’s nothing like reading eight bad scripts per week to make you realize how much you’ve been doing wrong yourself, as a screenwriter. Whether it’s your script’s creative substance, or the more nitpicky format and “look” or “flow” of the script, as a script reader reading other peoples’ scripts, you get up to speed very quickly on what a good script looks and smells like.

And bringing that insight to your own screenwriting? Win! You can always put your resume and sample coverage on file here at Screenplay Readers.

Benefits: Hollywood access! All the benefits of being a script reader, but while also building a valuable relationship with an agent or manager

I interned and then worked for an agent back in the 1990’s, reading scripts, providing coverage, and growing as a screenwriter in leapsies and boundsies.

The first few weeks were ridiculously tough, and I was loaded down with scripts (when I wasn’t answering phones), but by the end of the third week or so, I looked up from my desk and realized I was helping out every single agent in that office.

Literary, talent, and commercial talent agents were all my friends, (or at least friend-LY), and I was handling favors for all of them. (Whether that was helping them dodge a client on the phone, wading through a last-minute script pile, or even driving their clients to auditions).

All the while, I was reading scripts and learning the business end of screenwriting. Within 3 weeks I went from starry-eyed “arteest” screenwriter to starry-eye arteest screenwriter who knew how to translate that starry-eyed screenplay into a language and format which agents and producers could understand.

Benefits: It’s all who you know! Great connections, but usually lots of work for not a lot of pay

Name actors, name producers, show-runners – they all work with assistant. Assistants’ duties range from picking up dry cleaning to script development, and the pay usually isn’t stellar, but the relationship you’re building with the name actor or producer you’re working for is the real benefit to this gig.

Think about it. You’re a struggling screenwriter, but you have no industry contacts to send your spec script to.

Suddenly, you spend a year working for big movie star producer guy and boom – there’s a potential “in.” Chances are, you’re on a first name basis with her, and can call her up directly and say “Hey Susan, it’s Brian! Listen, I know you’ve been looking for a female-driven western, so I just wrote one. Wanna take a look?”

Naturally, you want to be a good human. Don’t go trying to cash in on your relationship before you seriously earn it. And make sure you get a sense, as soon as possible, of whether or not the A-Lister you’re working for is someone who reciprocates, or even appreciates your hard work. If they’re stuck in their own la-la land of me-me-me, (and many are), you might not be able to use the connection after all.

So where are you at right now, screenwriter? Still delivering pizzas? Or working in the aerospace industry?

Get tactical about your screenwriting! Maybe a career tweak is what you need to take yourself to the next level.

4 thoughts on “Screenwriter Day Jobs – What are the best ones?”