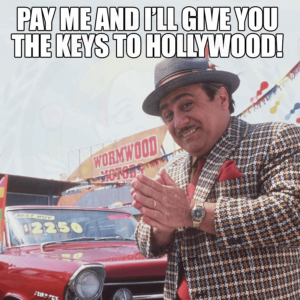 A friend I’ve known for 30 years stopped in for a few days, visiting from the UK. We’ve always been close, so he knew I ran a company that did something with screenplays, but didn’t know exactly what that meant.  So he asked, and I showed him how Screenplay Readers worked:

Agents, writers, and producers submit scripts to our reader team, we read them, and then we give our analysis of their scripts in small 4-5 page script coverages.

He was wowed at the whole concept in general, but his biggest question was:  “Have any of the scripts you’ve read been sold and turned into big studio movies?”

And that got me thinking.  We read over 1,000 scripts every year, and have hundreds of regular trusted clients that come back to us for coverage, but I really haven’t paid close attention to what exactly happens to each script after it passes through the Screenplay Readers office.

I’m sure that one or two of the scripts we’ve covered has had to have made their way to a huge sale, or made it through to production at the studio level, simply guessing from the numbers years we’ve been in business and the thousands of scripts we’ve read.

But at the very least, I know for a fact that several of the scripts we’ve read at Screenplay Readers have landed their writers representation from agents and managers,  pitch meetings with executives at major studios, and even option deals from producers, from indie level all the way up to retired studio level.

Even if I had the connections, I wouldn’t be selling Hollywood access

But then that all got me thinking:

All those great things are not the things we sell.  Although we do, with writer permission, forward Consider scripts and Recommend scripts to a few of our indie film contacts: a few mid-level agents, indie filmmakers, production companies, etc.  But we’re very up-front about the fact that these people on our list are not studio heads or big celebrity execs or agents.

The core of what Screenplay Readers sells, as any good script coverage service or script consultant sells, is the professional analysis of a screenwriter’s script, with the sole intent of helping the writer improve his spec, or helping the agent or producer improve their script at the core of the package they’re shopping around Hollywood or developing into a motion picture.

So it often makes me scratch my head to see companies out there promising their customers “access” to their awesome industry insiders, or promising to get their customers’ scripts on the desks of major studios, as part of a service they offer to customers for reading and/or analyzing their scripts, because I can see how easy it would be as a company to just say I’m handing my customers’ scripts off to some higher-up muckety muck at a studio, without my customers ever being able to prove that I actually did it.

What are they thinking?!  Here’s what they’re thinking:  Hollywood’s a tough nut to crack for writers, and they know it and you know it, and they’ve got a friend or two in high places who may or may not take the time to read your script if, and only if, that person signs off on it and recommends it super-highly.

Also fairly laugh inducing: Script coverage companies posting “Such and such came to our site, ordered our service, we got it in front of a muckety-muck, and then his script sold for $500,000!”

Maybe that service was ultimately responsible for selling that script, but maybe it wasn’t.  Maybe it was the merits of the script’s concept, or the writer’s friendly persistence, or personal charm at a coffee meeting with the buyer, which sold that script.  Or maybe it was because the buyer was looking for a vampire vehicle for Phyllis Diller that week.

I don’t want to dis places like Spec Scout and The Blacklist, as I’m certain those types of companies have proven helpful for some. But all too often, my company gets lumped unfairly into the same category as those access/exposure-selling / big-promise models, when in actuality, we couldn’t be further from it.

We sell one thing: our opinion of your screenplay. Our pitch is simply this: use it as a paid tool you can use to get eyes on your script and get a third party critique of it so that you can address anything that we feel isn’t working too well, prior to you sending it in to a contest or festival or pitch or you name it.

And we’re also very emphatic about making sure you get as much free feedback on your screenplay as possible, before hiring us. That is, get free feedback, then come to us and pay for our read and our coverage if you like.

Straight up: it’s shortchanging what we do, as well as insulting to our craft and our integrity, to lump us in with companies that promise access or exposure in exchange for money. But it’s an easy, surefire way to make yourself sound authoritative as a blogger or a defender of places which sell industry access to screenwriters.

Think of it like any other training. Take basketball.  You’ve got some hoops skills you’ve been working on, and now you want to try out for the Lakers.

You work with your corner team, comprised of friends, or maybe a few strangers from a local basketball meetup, to improve your jump shots, your free throws, your defense, etc.

But you reach a point where the feedback you’re getting from your friends and the basketball meetup folks isn’t helping you improve as fast.

At that point, you decide to hire a third party. Maybe a coach or some other expert.  That coach doesn’t work for free, but she’ll tell you “Your defense is good, but you’ve got to work on your speed and your rebounding,” and maybe a litany of other things you need to work on that either your friends didn’t catch, or didn’t have the skills or time to explain to you.

Screenplay Readers, like any good script coverage, is that basketball coach.

So it infuriates me to hear my line of work being characterized as the guy on the corner promising to get you signed to the Lakers.

I hope that makes sense.

Hey, bottom line, if you’re comfortable with buying access and/or exposure, by all means, go for it.  It may turn out to be a good investment for you, and the much needed “crack in the ice” you’ve been struggling for.  Not all companies or contests that promise to get your script read by muckety-mucks are in business to rip you off.

The best path for my company, however, is to stay focused on the core of our business:  improving the script.  Access, contests, formatting, proofreading… all of these are viable script services, but to put it bluntly, no service will ever get your script sold.  Not a coverage service, not an access service, not a consultant, and not a contest.

The biggest thing sitting in the way of getting a script sold for 95% of all screenwriters is:  the script itself.  At Screenplay Readers, 95% of the scripts we read are rated as a PASS.  4% are CONSIDERS.  1% receives a RECOMMEND.

So my advice to my compadres in the screen trade:

Don’t think of access and exposure until your script is part of that 4% or 1%.  And even then, only invest in promises of access if you feel you can afford to lose that investment.