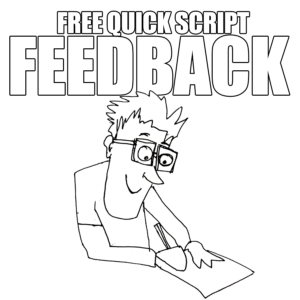 Today’s free script feedback is for the script Till The Morning Comes, submitted by M. Gatschner

Parole not per roll

CODY’s response “It is.” to the question “How you liking construction?” may be colorful, but it seems like a mistake. Save the color for later, once you’ve given the reader/audience time to get to know your style.  The second spoken line in the movie shouldn’t cause a reader to go “Huh?”

“It empowers Sam.” – You’ve said SAM once before this, when Sam was introduced.  Every time after that, he’s been referred to in the text as LEPITO.  For the strategic sake of not giving readers an excuse to get confused, stick to ONE name per character in the text whenever possible.

By page 10, the roles had flipped.  Lepito was now the little fish, and Jersey had him by the short hairs.  But I still wasn’t clear exactly how.

It’s a lot of talking to digest in 10 pages. Pare it down, or break it up into scenes, or simply clarify what’s going on.

If I’m a producer looking for a crime picture for Robert DeNiro, or similar, I’m a little intrigued because these scene do offer so much talking and so much scenery for a high-caliber actor like a DeNiro to chew on.

But if I’m a producer looking to churn out an AFM style straight-to-DVD picture, I love the talking because it’s cheap to do, but I’m not gonna be able to sell this finished film to anybody unless I can get some gunplay, fucking, fights, or explosions in there before page 10.

All of us want to make that DeNiro picture, but are you ready to turn down a sale to a smaller company who wants to make a smaller movie?

This is a movie. Not a stage play.  Get some MOTION in there.  Get us MOVING.  Quentin Tarantino can have his characters talk for 40 pages, but the rest of us can’t.

You’re on the right path. Your characters seem fairly well rendered, but they need more economy.  That is, say more with fewer words.  Have them DO something; not just talk.