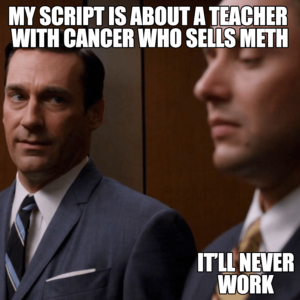 Many of the scripts that come into Screenplay Readers have a lot going for ’em:  great dialogue, solid pacing, characters that leap off the page… But sometimes a screenplay can have all those things firing on all those cylinders and still come up a bit short in the RECOMMEND department. Why is that?

In most cases, it’s easy to answer:  the screenwriter simply didn’t spend enough time in an elevator. Have you heard of the “elevator pitch?”  It’s when you pitch your script, but are limited to the amount of time it takes to share an elevator ride with whomever you’re pitching to. Neat concept, right?

So glad you asked! An elevator pitch is a way of pitching your story – your hot points, your concept, your sell – succinctly, quickly, and in a way that grabs the attention of the pitchee.  (Of course, if you’re literally stuck in a 6x6X6 elevator with someone, you can probably count on said attention of said pitchee.)

Elevator pitches, when effective, grab the listener by the lapels and beam an awesome, easily-understandable concept into their head.  Fast.

Yet the process for crafting and honing an elevator pitch is anything but fast.  It takes oodles of screenwriterly focus and effort not only to pare your script’s story and concept down to the appropriate, elevator-sized timespan, but to also really dial that pitch in categorically, to make it as fresh-sounding, as entertaining, and as memorable as possible.

An elevator pitch is all about performance

Make no mistake:  an elevator pitch of a screenplay is basically a 30-90 second performance.

And that performance, if it’s going to be effective, has to be crafted.

And that craftsmanship begins with you, the screenwriter, being honest about your story and your concept and really getting down to the nitty gritty of what your script is all about.

Picture that nitty gritty as a tasty coconut.  Picture the rest of your script as the vast, untamed Amazon rainforest.

Now, take your machete and get to the coconut.  Go!

This “machete moment” – this moment where you get honest with what your script is all about.

You could find “Hey! My script distills down to an elevator pitch really well!”

You could find that it doesn’t quite work as an elevator pitch. (If, and only if, you’re honest with yourself.)

In which case, you need to hunker down and figure out why your screenplay doesn’t boil down to an elevator pitch.

Hint:  it probably means your screenplay is a bit too “soft” on concept.  Not a strong enough “hook,” not enough going for it to grab anyone’s lapels.  Maybe it reaches for the lapels and grabs beard instead.  Or beltloops.  In either case, not good.

Put simply, a script with a strong, easily understood concept is one that translates well to an elevator pitch.

A script with a soft concept, or a meandering, unclear concept, or multiple/mixed concepts, does not.

Keep in mind, while it’s best to be able to pitch a hook,  concept, coconut to someone, you might find it’s easier to elevator pitch the meta qualities of your screenplay instead.

For example:  Did your great-uncle dig up a 90-minute unreleased tape recording of Einstein having a conversation with FDR about the use of the atomic bomb, and now you’ve turned it into a screenplay?

Or have you written the first underwater cop buddy spec script?

Or is your script about teenage William Shatner befriending a teenage Leonard Nimoy?

Those three examples are all interesting, but they’re meta.  They don’t really have to do with the meat and potatoes of your script.  They’re all concept.

Any one of those ideas you could probably pitch to someone and get their attention.  But grabbing their attention, as these concepts do, isn’t the only component to an elevator pitch.  You have to keep it.

Remember, we’re not literally talking about pitching someone in an elevator.  We’re talking about honing your script, paring away all that’s not necessary, in order to dial in a concept that’s easy to pitch, easy to understand, and easy to remember.

If your script can be distilled in that capacity, it has an edge.  If you have the skill to distill, you have an edge.

And if there’s an award for coconut metaphors, please forward it to me immediately.