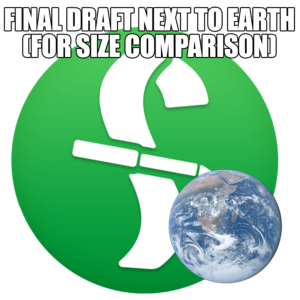 What do I love? Its ubiquity: Everybody uses it. (And if you’re running a script coverage service like me, you need to be able to open whatever file the client sends in. And 95% of the time, that’s either a PDF or, you guessed it, a Final Draft file.)

What do I hate?  Well, “hate” is a strong word. I reserve that word for shows like The Bachelor. And to be certain, Final Draft is a solid app and deserves a lot of credit, and certainly not hate.

But what do I strongly dislike about Final Draft? Three things:

Dislike 1) Before I switched from a Windows machine to a Mac, Final Draft had a penchant for crashing in the most inopportune moments, no matter what version I ran. Though it did crash on the Mac, it crashed a lot less than when I ran it on my pc. Is that everybody’s experience? I don’t know. But it was certainly mine, on two different sets of hardware over several years and on several iterations of operating systems.

Dislike 2) The interface/user experience.  The game has changed when it comes to simplicity and UI design, yet Final Draft still feels a bit stuck in that 90s Microsoft Word vibe, as does its cousin, Movie Magic Screenwriter, and many other writing apps, if we’re being perfectly honest.

Dislike 3) The price.  $199 for Final Draft 12 is a big chunk of change for most aspiring screenwriters.  But I don’t blame Final Draft – they’ve created and marketed a great product that basically now dominates the screenwriting space.

And that domination didn’t come just through great marketing. There are tons of excellent features that make Final Draft a solid writing app, and most folks wouldn’t dream of trading their Final Draft for another screenwriting app.

And as far as pricing goes, I have to emphasize that Final Draft does offer a lower-cost version of their app for iOS, as well as educational discounts, so my beef with their pricing isn’t full-on Kobe / Angus. And while screenwriters who got their start during the heady days of the typewriter (like me and many of my generation X) are probably not keen on the idea of writing a screenplay on a tablet, thousands of younger screenwriters have no problem banging out scripts on a mobile device. And Final Draft is there with a fair priced offering for it.

Update 5/23/22 — A few months after this article was originally published, I was invited to take part in the beta development for Final Draft. I don’t quite remember much other than I wasn’t a very good beta tester because I was extremely busy at the time, and that the Final Draft folks were very nice and responsive.

But I’m not here to rake Final Draft over the coals.  They put out a fine product. As the name of the article states: I’m here to provide some cheaper and free alternatives to Final Draft that, in my opinion, really give Final Draft a run for its money. Whereas software development used to be the realm of large, well-funded companies and teams made up of dozens, if not hundreds of developers and programmers, now it’s all about the smaller, more agile companies rushing in to fill an ever-increasing demand for lighter, cheaper apps, and we screenwriters stand to benefit from the panoply of new options for screenwriting.

Take it from me — I’m a desktop guy who used to vehemently poo-poo using anything other than Final Draft, but here are a few others worth your attention:

Wow!  This app is an elegant, easy-to-use, streamlined little firecracker of a screenwriting program .  The interface is sleek, plain, and modern, and fully customizable. I jumped right in and started writing a scene, and it just flew.  Right on to the page.  Very intuitive tabbing

For new screenwriters: By tabbing I mean, for example, you type INT. COFFEE SHOP – NIGHT, then hit Tab and it jumps down and awaits your input for the action/description line.  All good screenwriting programs do this, of course, but Trelby’s just feels FAST.  Faster than any I’ve used.

I know… I know. It’s a small thing to complain about. But those tiny bits of “lag” – even if they’re just mere milliseconds between your keystroke and what appears on the screen – they really add up.  Especially over the course of a 90-page screenplay, consisting of 6 months of work, and 20-30 drafts.

Trelby’s lag is virtually non-existent, even when I loaded in a test script.  Oh, and by the way, Trebly inputs Final Draft files, and saves Final Draft files, so if you’re thinking of making the switch, you can do so in a very friendly, non-destructive way.

Other great features I love about Trelby:  it exports Fountain markup.  (Fountain is the new open-source markup language that lets a lot of different new screenwriting apps share a common script formatting standard.  Think of it as a behind-the-scenes bit of code that standardizes how a screenplay is supposed to look, which is shareable and FREE for new, smaller developers to use and incorporate into any new screenwriting software they’d like to create or enhance.)

The only major drawback to Trelby that I could find was that it doesn’t have the ability to lock and color-code revision pages.  If your production is going to PINK, there was nothing I could find in the software or on the website that enables you to do it with as much ease as you would in Final Draft or Screenwriter.

But for me, the lightweight feel of Trelby, and its ability to export to Final Draft, are the things that are going to compel me to give Trelby a shot on my next screenplay. For me, the lag is unbearable on other software packages, so this is a real lifesaver. For others, they may not care or even notice the lag, so Trelby would be less appealing, especially without the easy color-revision pages feature.

The good news is, Trelby is open source and seems to be adding features all the time.

Available for PC, Mac, and Linux. UPDATE: I can no longer recommend as Celtx is no longer free or cheap.

UPDATE: I have removed Celtx from my recommendation as an alternative to Final Draft. At the time I originally published this article, Celtx was primarily a free app, and now it’s become some sort of beastly online SAAS (software as service) app, complete with a monthly fee. Any screenwriting app that’s asking you to pay a monthly fee makes zero sense when there are so many non-subscription apps out there priced reasonably. I’ll keep the original text I wrote about Celtx up here for posterity, but to emphasize: I no longer see Celtx as a viable cheap or free alternative to Final Draft:

Celtx has been around for a while, and they’ve won over a lot of screenwriters with their feature-packed free screenwriting software, and their cloud-based paid version.

Both feature all the goodness you’d expect from a world-class screenwriting program, but the paid version offers a few more wells and whistles. The most prominent of those features being clip art you’d use for scene blocking/storyboarding, etc.

The suite is responsive enough, but the major drawback for me is the sheer amount of clunk and window space it takes up. It seems everything you do opens up another window, and it fills up your screen pretty fast. Not to mention the amount of tabs, buttons, and menus can really be daunting for the uninitiated.

The suite itself is powerful and quickly becoming its own standard. But the design and usability? It definitely feels like sitting down in front of an Avid video editing program for the first time.  And I’m not sure that’s a good thing for all screenwriters.

Fade In Pro’s features list is overwhelmingly plump.  And its design and usability puts it ahead of Final Draft in many ways.

Fade In is impressive. It’s a great screenwriting program, and packs a wallop of elegance and usability, as well as all the features you’d expect from a screenwriting package.  Scene navigator, easy tabbing, lots of import/export options (to/from Final Draft and many others), and even page-color/revisions.

The bottom line:  Final Draft is still the big gorilla. People still see it as the industry standard.  But with more and more modern, elegant, streamlined, super-responsive, and future-proof desktop and mobile screenwriting apps hitting the market, and especially with their increasing compatibility with Final Draft files, you owe it to yourself as a smart screenwriter to take a second look.

UPDATE 5/23/2022 — Adding a bit more to my review of Fade In: It’s been now several years since I first published this article, and have since spent a lot of time using Fade In in many situations: writing scripts, formatting and proofreading scripts, breaking scripts down for production and budgeting, and for import and export in/out of Final Draft, Highland, and Word. And I can say this: I’m only more convinced that it’s the best app you can buy for screenwriting.

I’ve reached out to Kent, the designer of Fade In a few times and he’s always been prompt with support. What’s more, the app has been completely solid, and the updates keep coming regularly, and they happen seamlessly.

And whatever you choose, just remember: Final Draft will probably always be there in case whatever app you land on doesn’t make you a happier screenwriter. Final Draft actually responded to this article when it was originally published and you can read that response here.

Remember: it’s not the app, it’s the writer!

Keep in mind: when all is said and done, the app you write your script on really, really doesn’t matter. All screenwriting programs do one basic thing: format your screenplay as you write it.

That said, I’ve seen hundreds of scripts cross my desk at Screenplay Readers that have been written on all variety of professional software but still don’t look right. Find what works for you and maximizes your ease of writing. The best app is the one that gets out of your way and lets you think about your story and not what you’re writing it on. I can do that just fine on any of these apps I’ve mentioned but you may feel differently. Explore. Try them out. Find the best tool for your toolbox and go with it!