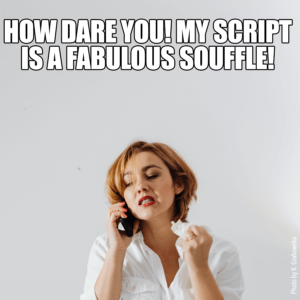 They say a company is never supposed to publish the bad things people say about them.  Well, they may be right, but some of these are just too hard to resist posting.

We’ve been reading scripts and providing script coverage at Screenplay Readers since 1999, and have had a ton of awesome feedback and glowingly positive testimonials from happy writers, happy agents, and happy producers who really love our script feedback.

But we’ve also had a few responses which, well…. aren’t exactly “positive,” in any sense of the word.

And some are even downright hie-liarious!

Here, for your reading enjoyment, (or so you can get an idea of the negative aspects of the business you can expect if you should ever jump into the script coverage business), are my company Screenplay Readers’ funniest negative responses we’ve received from angry clients.

“Your script reader hasn’t had sex in quite a while.”

“I made all of the changes suggested by reader XX then resubmitted my script back to you. While I appreciate different views, the second reader XZ must have been a man that does not like family friendly films at all or has not had sex in quite a while.”

Yep.  You figured it out.  Your script received a PASS rating from our script analyst because, well, they just haven’t had sex in a long time.

See, unlike other script reading companies, we keep our script readers in cages below the Screenplay Readers compound.  They’re all dressed in loincloths and bikinis, so they can see each other across the room, but aren’t allowed to touch each other.

And every day, we haul down a wheelbarrow full of raw meat and a stack of spec scripts and they all go nuts.

“We meet at sundown. Bring your six-gun.”

In response to receiving the Notes-Only coverage she ordered, which is very clear about not including a synopsis, hence the name “Notes-Only Coverage:”

“Why didn’t he write a synopsis? We didn’t get what we paid for. We gave you a chance to make it right. You did not.  You had your chance.”

Uh-oh.  Calmly explaining to this client the details of what she ordered didn’t work.  She’s still fightin’ mad!  I reckon we have to draw pistols at ten paces.

“I’m sorry for torturing you.”

“I submitted the same screenplay that your reader commented on to Script Savvy and they loved it, giving it a 57 out of a possible 60 points (two of those lost points were easily fixed).  But your reader gave it a grade of PASS.  When I questioned Script Savvy about the disparity, she couldn’t explain it.  Now I’m out $60 and have only this negative coverage to show for it.  Sounds like reading it was pure torture for you. May the Lord bless you and keep you, may He make his face shine upon you and give you peace.”

And may the Lord make you realize that receiving a Pass rating doesn’t mean your screenwriting career is over, or that one script reader at one coverage company is the final arbiter of your talent.

When our customers take our script coverage personally, that’s when things get really, really awkward.

Because they reveal themselves as folks who don’t really know what the heck they ordered, despite the pages and pages of description on our site.

I want to reach out through the internet wires and give them a big hug and say “Listen!  If our calm, objective script coverage hurts your feelings, you might want to reconsider this whole screenwriting thing, because there’s folks out there who are gonna read your script, or produce your script, or force you to accept a crappy deal, who will rip your heart out, burn down your house, and kick your dog in the nuts just to make sure they make an extra net point and you don’t.”

But hugs don’t work that way.  And now that I think of it, I’m not really a “huggy” kinda guy anyway.

“My script Is a fabulous souffle!”

“My script has been called ‘outstanding’ and ‘a souffle of charm and energy’. (It’s clear why I remember those praises). I appreciate that Script Title won’t be everybody’s cup of tea, but to label it a ‘PASS’, is laughable.”

I get it.  Me and my reader team can’t appreciate your genius.  That’s our bad.  I’m totally apologizing for all that right here, right now.

But our business model is not that of masseuse.

We’re friendly, calm, and as objective as we can be within such a subjective profession, but we don’t really care if forty other people read the script and loved it.  We only know what we think of your script.  And if we think it needs work in certain areas, we’ll tell you.

But the good ones don’t last long in that bubble. They challenge themselves; they listen to all feedback on their scripts because they know that feedback of any kind is a rare mineral.

And finally, while most of the negative responses we’ve received have been somewhere within the realm of human decency, there are others that don’t exactly fit in such constraining a mold.  Such as our #1 favorite negative response(s) below.

From two fellows who just didn’t like our script coverage, and felt they needed to say as much.

“How bout you take your coverage and go f*ck yourself  Sorry your a d*ck j*cker.”

Alas, the searing wit puts Mark Twain to shame.  We stand humbled, and pray that our cars don’t get repossessed.  Or something.

8 thoughts on “Our funniest awful customers”