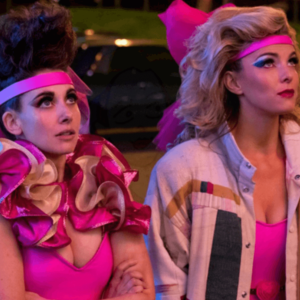 Like all good shows, new Netflix GLOW tv show has a lot to teach tv writers (and screenwriters), aside from being a solid, fun series with a lot of heart. It’s loosely based on the true-life 1980’s wrestling tv phenomenon, The Gorgeous Ladies of Wrestling – a rogue’s gallery of fierce, colorful badgirls who put a unique female spin on the egregiously popular faux-but-fun sport of professional wrestling.

The wife and I just binged the first season of GLOW over the weekend and, despite having a few hiccups, we couldn’t help but to keep clicking on that next episode. Me fancying myself a writer, I took away some key writerly observations that I’d like to foist on you.

Always Leave Room In Your Script For Marc Maron

Marc Maron – veteran stand-up comic, host of arguably the world’s most popular podcast WTF, and fellow LA eastsider) – plays Sam Sylvia, the low-budget director anointed to assemble the team of lady gladiators and to bring the TV show to life.  If you’ve ever seen IFC’s Maron, or tuned into Maron’s podcast, or seen one of his comedy specials, you’ll immediately notice one key thing:

His persona and his comic identity is all about authenticity. He just doesn’t bow and scrape for yuks. The bit, the scene, the conversation – he visibly does everything within his power to keep things believable, and keep the comedy coming from a real place – namely, his real-life anxiety, real-life pessimism, and  real-life self-perceived shortcomings as a human.

As a result, there are a slew of great moments in GLOW when Maron’s salty, self-destructive filmmaker-as-artist character absolutely smashes through stiff scripted scenes that can often feel like an Ikea table’s instruction manual.

That’s not to say GLOW’s writing is bad. It’s not. It’s just that Maron seems to have an uncanny consistency, in nearly every episode of Maron, and now this new GLOW tv show, with keeping his head above the screenplay, and making his moments authentic. Even if sometimes his co-stars Alison Brie (Mad Men) and Betty Gilpin (Nurse Jackie), who have oodles more acting chops, may run circles around him in any given scene. The authenticity of Maron doing what he does in response is extremely fun to watch. I like to say that when I go to see a band, I’m not there for the studio album, I’m there to see them fuck up. I’m there to see the seams.  Marc Maron is those seams, personified.

The writers and directors of GLOW recognized what Maron brings, and they gave it space and let it do its thing.  It’s not something you can write, necessarily, but it’s something to keep in mind when writing:  leave room for Marc Maron. Leave room for the personalities coming aboard the project to inspire the character, or the show, beyond what you thought was possible.

Writing a Period Piece? The GLOW TV Show Shows You How a Show Shows A Period

I recently tuned in to Showtime’s I’m Dying Up Here. Turned it off within 5 minutes because they didn’t nail the 1970’s. Close, but no exploding cigar.  And I recently, finally, gave up on Halt and Catch Fire. They just. Couldn’t. Get the details of the 1980’s right. Stuff like that takes away a lot. For me at least. I lived the 1980’s. They didn’t have head-to-head online first-person shooters in 1985. I’m sorry. They just didn’t.

GLOW, on the other hand, does almost everything right.  From the look of the film grain, to the music cues, to the puffy shoulders and makeup, to the box Corn Chex cereal on the fridge, straight from my childhood.  A lot of these shiny stars I’m affixing are the result of good, non-sleepy art direction, or, naturally, it could be the byproduct of producers and directors paying actual attention to the production design (or hiring a good production designer), but really, when you think about it, you kinda have to admit: it all starts with the writer.  If the writer isn’t concerned with getting the period right, with regards to characters, situations, places, and voice, why would a smart director or producer want to be a part of the project?

All of the ladies on the show turned in fun performances, and strutted and fretted with much heart. But whenever there was a stiff scene or a line that didn’t quite ring as true, I couldn’t help but think that the reason could be traced back to the show requiring a very specific type of actor to fill these roles:  Female actor with acting chops, of a specific age range, of a specific ethnicity in order to balance (quite appropriately, in my opinion) the color palette of the show, who can also, get this, wrestle. (Or at least be willing to train and take on a very physically-demanding role.)

None of these wonderful actors should be faulted for delivering an occasional stiff line (and in fact, none of my nitpicks take away from the show’s charm), but the takeaway for me was that when writing something as specific as a cast of female wrestlers, in a period piece, with a very specific set of demands (rightly so) on background and ethnicity, a writer simply needs to work harder to make each character’s lines more distinct and more memorable.

Too many times there were moments where the girls’ lines, frankly, seemed completely interchangeable. So much work was put into casting them uniquely, but not enough work, in my reckoning, was put into the page towards making them sound different from one another.   As a result, we’re left with an overall feeling of that aforementioned charm, but we’re not holding on to many memorable moments.

And that’s not simply good enough when you’ve got a show helmed by women, starring mostly women in this increasingly tenuous period for women. Please don’t get me wrong. The cast and crew of GLOW shouldn’t be laden with the burden of being the torchbearers for all the diverse voices of women in film and tv. Not by a long shot. And in fact, the show does a great job undergirding the reality that women are strong and are self-empowering (even while placed against the backdrop of Reagan’s America in 1985).

For Season 2, which you know is coming, I have a request for the showrunners of the new GLOW tv show:

Use Carmen Wade’s (Britney Young) story with her family not approving of joining the show, Sheila The She-Wolf’s (Gayle Rankin) identity and space and trust issues, and Justine’s (Britt Baron) unique relationship with one of the other characters (Shh!) as the templates for how to approach Season 2.  Weave them into Ruth and Debby and Sam’s stories more.  Go richer and deeper. The external stuff is easy and will always be there. Come on now. If Game of Thrones can do it, so can you! (wink)

I get  it though. It’s  hard to devote page and screen time to 14+ characters in a 30-minute show. My longing for more performance and details and screen time with these great non-lead actors of GLOW isn’t so much a critique as much as it’s an admonition to writers:  If you’re writing interesting characters, sometimes leaving us wanting more isn’t the best way to do it. Sometimes giving us more is.