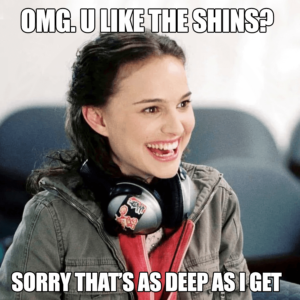 Hack screenwriters write too many female characters. In their universe, girls don’t get to save the world. Women don’t get to run companies, or incite revolutions, or find secret magic treasure, or think for themselves.

Page after page, borderline-misogyny after borderline-misogyny, they keep coming: Men writing women as flat, predictable trope-beasts; Women writing women in a way they think will sell better to the Hollywood suits, who can’t get enough of them trope-beasts. Oh, and I don’t use the term “misogyny” lightly, because I see it running the gamut, from the blatantly sexist to the quietly exclusionary in all its rapacious consistency.

How is it that, despite a 50%-51% female society, and despite a century of cinema, screenwriters, en masse, still haven’t figured out how to accurately depict and/or represent female human beings on screen?

Why women are still written like Barbie™ dolls is beyond my ken (pun intended) but I intend to at least do something to make a difference.

Sexist screenwriting isn’t always easy to spot, but unless you’d like to be sorted into the “sexist hack screenwriter” bin, you’d best learn what it looks like.

To that end, I’ve put together 3 quick, easy ways you can writerly check yourself before you writerly wreck yourself. Without further ado, here’s the biggest problems I have with how hack writers write female characters:

First of all, if your protagonist is a tired retread of some nerdy, nervous, quiet guy who pursues, in order to obtain, some hot gal, or sweet gal, or geek gal, or, (dare I say it?) MPDG, but can’t get his nerve up to ask her out, or can’t (or even worse, won’t) overcome whatever obstacle preventing him from doing so, I implore you: please choke on your screenwriter binky and die a slow death by saliva.

Why? Because if you’re thinking on those terms – of pursuit, of obtainment – you’ve got your head screwed on wrong.  Maybe mama never taught you right, but the results are officially in:  women aren’t objects.

And they’re doubly not sex objects.  Any more than you are, chachi.

Let me back up. Pursuit, per se, isn’t really the problem. Of course your characters are allowed to pursue the attention and/or affections of a female character.

But if that female character doesn’t have dimension, or a mind, or a belief system, or a slate of traits, strengths, quirks, wants, needs, shortcomings, or doesn’t do something in, around, for, or because of those things, and/or doesn’t pursue something for herself or for others or a cause…

…or if there is little or no parity between the seriousness, comedic wit, humanism, and/or dimensionality of the protagonist and that of the female character being pursued…

… then, frankly my dear, you’ve written a woman as an object.  And I don’t give a damn.

If that’s indeed the case with your particular screenplay, I’ll give go ahead and give you 4 minutes while you rethink your entire screenplay, and perhaps your entire raison d’être.  (P.S. Apply said binky.)

Hack writers make sure their scripts fail the Bechdel Test

A woman named Alison Bechdel, based on a conversation with her female friend, who she says inspired the test, asks us to apply an astoundingly simple, sort of anecdotal, test of every film, in order to gauge whether or not the film likely to be either a step towards gender equality in cinema, or a step away from it. It’s super simple, and it goes like this:

To pass the Bechdel test, a film must

A) Have two named female characters…

B) Who talk to each other…

C) About something other than a man.

Sounds pretty easy, right?  You’d be surprised at how many fail. In fact, it’s fair to point out that many films that would be considered to have strong female characters do fail.

But the keywords here are anecdotal. Illustrative.  The purpose of the test is to get you to think, to get you to observe, to remind you of the disparity Hollywood seems to revel in.

Here’s a site that lists movies by their Bechdel test results.  Prepare to be surprised, dear writerly personage of nameless gender.

Hack writers portray “strength” within a male context only

But those aspects of “strength” are just riffs on the same old tired male version of what it means to be strong. Physical power. Dominance.

Ah, but female strength is an often marginalized kind of strength.  While it often has very little to do with chest beating and ass kicking, I remind you, without exaggeration, that the strength inherent in the female gender and biology, no less than gives birth and nurtures the entire human race on a daily basis.

(That is, when they’re not flying jet planes, running Yahoo, blasting off into space, or considering a second presidential bid.)

Female strength is the strength of renewal, of nurture, of nature, of protection, of collaboration, of harmony. It’s the strength of wisdom, of patience.  Of survival.  (And yes, of violence and power, and fully capable of matching man toe-to-toe, categorically, it must be emphasized.)

Perhaps because it’s easier and more profitable to show Scarlett Johansson blowing things up. Or, perhaps its the conspiracy between deadlines and laziness, or because producers lean towards spec scripts and script coverage with explosions. Or, perhaps it’s a reflection of the culture we live in which is still struggling to resolve centuries-old gender issues. I suggest it’s all of the above.

But as a screenwriter, even if you choose to ignore, at your peril, the cultural, collaborative, and nurturing strengths of the female gender, and choose instead to keep writing your female characters using strength as defined within the male context (ass kicking, etc.), at the very least bear in mind that when it comes to the actual physical strength of the human female, it is, by and large, significantly different, (not weaker – but different) than that of the male.

Betcha didn’t know this:  despite being categorically capable of the same physical prowess and physical strength, the muscles of the female human are biologically oriented towards endurance, and can generally last much longer over the long haul, while the muscles of the male human are biologically oriented towards burst strength, and tend to fatigue more quickly.

So what?  What does that mean to me as a screenwriter?

That, my friend – that one, little biological difference in how human female muscles and muscle use differ from that of the human male – sure it might sound clinical, but trust me –  it’s screenwriting gold.

Because how many movies, from any era, ever depict females ever physically outlasting males? My best guess: You could probably count those films on two hands. In most cinema, it’s the males that outlast / out-power / out-strong the females, much to the consternation of discerning, rational people of all genders, and much to the detriment of the cinema audience at large.

When you get beyond defining strength as brute force, you open yourself, as a screenwriter, to countless new ideas and situations – ideas which may give your script what it needs to stand apart.

Men, women, we’re all capable (and some of us guilty) of putting stuff on the page that does little to advance any particular cause or to right any particular wrong.

But if you’re like me, you want to see cinema improve; you want to give script notes on screenplays with smart, capable, females up on that big screen. You want to see female characters through an accurate lens, no matter how alluring the temptation may be to fall back into rehashing the old tropes and stereotypes.

Alas, my little blurb here but scratches the surface of how and where cinema goes wrong with the female movie character. For greater detail and exploration, I recommend you begin your journey here. Or Google. Just start your journey. It’s just as vital as learning the craft of screenwriting.  To write in the dark, ignorant of 50% of the population just because that’s the way it’s always been, is no longer acceptable.

There’s a vast market out there waiting – craving – a new, more truthful view of women, girls, aunts, daughters, mothers, you name it –  whether it’s offered in a tiny New York city romance film or an epic sword-and-sandal picture.

And by doing that, you side with the true storytellers of our age.