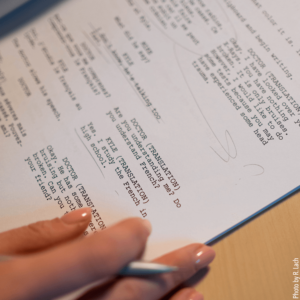 It’s the age-old question every screenwriter asks herself:

Well, not really, but it’s still a valid question.  Does screenplay coverage help a screenwriter to improve her script?  Like any notes from anyone, free or paid, it all depends on who’s giving them.

But let me break down the major pluses and minuses of coverage in general, and you can make up your own mind.

Pro: Screenplay coverage provides an “x-ray” of where your script needs work

A lot of screenwriters (and I count myself in this bunch) already have a strong suspicion as to what’s working in their script and what’s not, and all they want is a quick rundown and/or confirmation.

And that’s where script coverage really excels.  From the get-go, script coverage was designed to give busy agents, producers, and other industry folks, a quick idea of what the script was about, what works, and what doesn’t.

Pro: Coverage lets you see how strangers react to your script

The problem is: even if they do read it, it’ll take a month.

And even then, their notes are likely going to be drastically unhelpful.  That’s assuming you can pry notes out of them at all.

Bottom line, it can be extremely difficult to get friends to give you feedback on your screenplay.

With screenplay coverage, you drop a few dollars, wait a few days, and a total stranger gives you several pages of critique that, while may not always be super in-depth or detailed, but will definitely help you pinpoint problem areas in your script. My company Screenplay Readers provides that exact service (and you can check out all of our services here.)

Sometimes script coverage is provided to answer the question “Is this script the best gig for my client, the famous A-list actor, Bob Cruise?”

Sometimes script coverage is provided to answer the question “Which script of these 14 I was sent from my agent can I shoot for under 50 mil and nails all 4 quadrants?”

Sometimes script coverage is provided to answer the question “Should I sign this screenwriter who has 11.5 million views on his YouTube channel?  Sure he can make funny little videos that bring in advertisers, but can he WRITE? Or will I look like an idiot sending him out for writing gigs?”

With most online screenplay coverage companies, you’re going to find that the script coverage they provide is geared more towards helping the screenwriter, even going so far as to address the writer in the coverage on a one-on-one basis.

For example:  “I really think you should lose the car chase on page 5.  You’re slowing down your script.”

That sort of screenplay coverage is great, and of course writers love it.  But, for example, at my company, we do it a bit differently. That is, we try to omit all references to the screenwriter.

Instead of the above, we write:

“The car chase on page 5 slows down the pacing. “

Our method tries to maintain as much objectivity/cold analysis as possible, without talking to the writer, because we believe it’s the sort of coverage our clients prefer.   (Not to mention, not all of our clients are screenwriters.  Some are agents, producers, managers, actors, etc.  so talking to them in the coverage as if they’re the writer can be jarring.)

Which method is better?  The personal, 1-on-1 writing style, directing all comments at the writer?  Or maintaining a more objective, critical voice?  They’re both great and they both work.   But they’re both different.

We make sure our reader team at Screenplay Readers is free of these sorts of nimrods, but you’ll likely encounter them at many of the agencies and production companies out there, as well as at many script companies out on the internet.

Snotty readers are those folks who have super strong opinions about screenwriting, but feel it’s necessary to bash the screenwriter in their comments.

These folks may be great at script analysis, but it’s just the way they do it that really makes the whole process a chore.

Part and parcel of being a screenwriter and receiving coverage is that someday, you’ll run into one of these venomous readers (of course, not at our company), so be prepared and keep a cool head.

Con: In most cases, you’ll probably never see the coverage

Agencies and studios all do coverage on scripts that come in.  Nobody has enough time to read all of them, so script coverage is just a way of life for much of the film industry.

But as a writer, you’ll likely never see that coverage.

Con: Screenplay coverage is not as in-depth as script notes

Screenplay coverage, in general,  is all about brevity. An overview. A bird’s eye view of your script, if you will.

That bird’s eye view gives you a good general idea of problems in your script, but it doesn’t necessarily focus like a laser on each and every last line of your script and give you an exhaustive list of solutions, as does script consulting or one-on-one script notes.

Over the last decade-plus, my company Screenplay Readers has been providing screenplay coverage, and one or two customers have been disappointed when they pay $100 or so for a coverage, and then don’t receive a step-by-step, line-by-line, 25-page instruction manual on how to re-write their screenplay, or when the reader, according to the mistaken customer, “glosses over” tiny, irrelevant specifics in their screenplay.

So if it’s page after page of super-specific details you’re after, screenplay coverage is probably not the service you’re after. But then again, no script consultant or script notes are going to provide said 25-page instructional manual on how to rewrite your script either.

But the bottom line is this: if you just need to know what components of your script aren’t working and what to do about them, without an exhaustive line-by-line itemization of everything that’s wrong in your script, down to the last typo, screenplay coverage is not only a great option, but it’s often all you really need to get you started down the right path towards a strong rewrite.