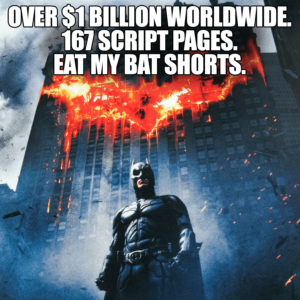 “I loved the movie Django Unchained, but the script was too long…”

“The Dark Knight made us millions, but the script was 167 pages, so let’s not do that ever again…”

…Said no one ever.

Yet, if you’re lucky enough to get your script into the hands of someone who can make or break your career, your screenplay length (aka the page count) is the only thing in your script that you can be sure they’ll read, and read first.

Why is that? Well, time and effort are usually their biggest concerns, but so are shootability and budget. Not to mention that high page count that’s not coming from Quentin Tarantino is usually a tipoff that the screenwriter doesn’t know how to make a movie, quite possibly because they probably aren’t aware of this math:

So while there’s no hard and fast rule against screenplays over 100-110 pages, there’s definitely a built in “screenplay length bias,” conscious or not on the part of the potential reader or buyer or producer, that at the very least causes more “drag” on your script’s potential, and at the very worst, could send it directly into Unread Script Oblivion™.

With all that in mind, today I’m sharing a few things you can do to cut down your page count.  If you’re new at self-critique, the first step is to remove yourself from the outcome (as I describe in this post.)  After that, the rest are pretty simple screenwriting tactics, tweaks, and approaches pro screenwriters know, use, and embrace:

Here’s an essential exposition: Indiana Jones hops into a plane, finds a big snake on his seat and lets us know he’s deathly afraid of snakes. 35 minutes later, he has to descend into a pit full of snakes.

But what if it was a vampire bat instead of a snake? Yet it’s still a pit of snakes he has to jump into later? And what if, for the rest of the movie, his fear of vampire bats was never again mentioned? Weak, right?

That, my friend, is non-essential exposition. Worse, it’s a waste of time and money to shoot.

Writers, it could be said, are capable of great abuse. Audience abuse. Because they keep hitting us over the head with things they’ve already told us.

Here’s an example of what I’m talking about:

We read a page and a half of a car chase. The characters do X, the villain does Y.

After the car chase, the characters meet up with another character and then explain to him that they did X and that the villain did Y.

So to repeat (and yes, I relish the irony of saying “So to repeat” in this section) :

If we’ve just read it on the page, don’t repeat it later. That goes for exposition as well. If you’re working on a motif, and need to present a pattern, then do so but escalate. Give us new information or context or a new viewpoint and/or heighten the emotional payoff while repeating that information.

Professionals either escalate their repeated emotions or delete them

Return of The King, the third installment in the Lord of The Rings trilogy, suffers from what I call The Multi-Day Tantric Screenwriting Orgasm™. It has no fewer than six distinct, extremely high emotional resolution moments: Gollum falls into the lava, Frodo wakes up with his friends, Aragorn is crowned, Sam marries his girl, Frodo finishes his book, and Frodo sails off into the sunset.

All of these sequences, totaling many minutes of expensive screen and audience time, all cause the audience to feel really, really happy. Awesome, right?  Yeah, but it’s virtually the same exact level of happy, six bloody times in a row. Yes, making an audience feel happy is what we got into the screen trade for, but six beats of the same exact level of happy is just bad. Like Saruman bad.

How to train yourself to avoid these sorts of emotional repeats? As an exercise, assign percentages to your scenes, based on the emotion they’re transmitting. If a scene where a man and wife argue takes the audience to X% of any given emotion, make sure all scenes after that only increase that percentage.  Easy right?  Plus, you love percentages.

Professionals give us espresso, not coffee

Yes, Ms. Faulkner, writing prose is nice.  So nice, in fact, that it has no place in a screenplay.

If you’re new to converting your prose into screenwriting, here’s an example of how you can start (and by the way, it’s the same place prose writers start when paring down their own too-massive verbiage).

That is, instead of this…

A house sits on an old field, weed-won and surrounded by tall gum trees. A small chicken coop is guarded by an old, feisty mule. The barn has a fresh coat of paint on it. An old farmer named MR. STINKERTON (in his 80’s, blue eyes, dirty overalls, and happy to be here) clings to a set of car keys as he makes his way from the porch to his old beat up 1939 Ford truck.

A dilapidated farm. MR. STINKERTON (90) steps out and heads for his truck.

The information from the above scene is:

Mr. Stinkerton is old, has a truck, and lives on an old farmhouse.

But what if even the pared down version of the scene above isn’t necessary because we’re able to get all the information that’s transmitted in that first scene in the scene to follow, like this:

Mr. Stinkerton pulls up in his truck, greets a handful of other dirt farmers.

From this scene directly above, we’re transmitting everything we transmitted to the audience, except the fact that Mr. Stinkerton is 90. Easy enough to remedy:

MR. STINKERTON (90) pulls up in his truck, greets a handful of other dirt farmers.

Mr. Stinkerton being 90: check. A farmer: check. Has a truck: check.

Tilt down to reveal the pro screenwriter ditching her camera moves

When visualizing a motion picture, it’s tempting for screenwriters to put camera moves and angles on the page, but in all honesty, it’s a waste of line space.

Even if they’re few and far between, even if it’s just a simple “We pan down to reveal,” see if you can get rid of yours.

The same goes for parentheses. Save those for moments when it’s otherwise impossible, and I mean utterly impossible, for a reader to understand from the context how the character is supposed to deliver the line.

Here’s a bad use of parentheses:

(thinking out loud, to himself angrily)

Here’s a good use of parentheses:

Mr. Pink and the boys talking about tipping waitresses and Madonna’s big you-know-what might’ve made for some great comedic moments in 1990, and in sporadic examples since, but I have a bit of bad news:

It’s usually because those screenplays are being turned into films by actors and filmmakers who know what they’re doing.

It’s one thing to watch and listen to Steve Buscemi for 4 pages while he plays the smallest violin in the world for waitresses, but it’s quite another to count on a script reader to casting Steve Buscemi in her mind while she reads your script.

Lengthy banter is seldom made great by screenwriters who aren’t at the pinnacle of their game, and is almost never made great by ham-fisted or amateur actors and directors.

When all else fails, sure you can tweak the page margins or the indentation of the character name or dialogue elements in order to squeeze more text onto a page and therefore cut down on your overall page count.

But any good producer worth her salt will notice as much, and even if they don’t, a lot of dense text on your page almost always adds up to a negative reading experience.

If you absolutely must cheat, at the very least attempt to do it with as much subtlety as possible. For example, adjust the margins on only some of the pages, preferably pages with a lot of action on them. Action pages tend to get skimmed more than dialogue pages, so while you’re still running the risk of fatiguing the reader, your cheated margins may be less obvious.

Take all of these suggestions to heart, with a caveat: all sorts of scripts with all sorts of bloaty badness in them get bought and sold and produced all the time.  Ultimately, I say that being a bloaty screenwriter who finishes a script is better than a lean screenwriter who never finishes one, but if you want to improve your odds of making a sale or getting your screenplay produced, paring down the page count is one of the best ways to do so. But if you’re not good at critiquing your own work, or haven’t grown thick skin as a screenwriter just yet, you can always hire my team and I to slap you some coverage to get you started.

In closing, let me emphasize so as not to get drawn and quartered:  Flat out, pro screenwriters don’t worry as much about page count as they do about telling a great story for the screen.  That being said, most know that good stories for the screen are lean, mean, and generally under 120 pages.

2 thoughts on “How to get your screenplay under 120 pages”