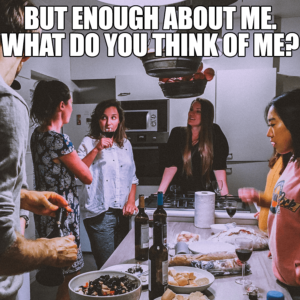 Screenwriter networking is absolutely essential to any screenwriter’s career. People knowing people, referring people, befriending people — without any exaggeration, this is how films and television get made in the film industry.

Once more for emphasis: meeting and working with film and tv people is mandatory if you want to make it as a paid screenwriter or television writer.

But how do you do it? How do screenwriters meet people who can help their career?

How do aspiring screenwriters meet people they want to work with? Good film people. Talented tv people / trustworthy film industry people / those rare creative-yet-sane people / people you want to add to your filmmaking community and perhaps even befriend?

The detailed answer is: Screenwriter networking is a tricky thing, which takes a lot of practice. But below are our quick and essential Do’s and Don’t’s we feel will help make the process a bit easier. These tips are some of the basics you should adhere to when networking and/or meeting film industry people at parties or Hollywood events.

Whether you’re in LA, Atlanta, Austin or New York, or at a film festival in Toronto — or  London, or Cannes, France, or Durban — these basics should help you make your adventures in screenwriter networking a bit smoother.

Do start with something casual. Don’t say “So what do you do?”

Even if you only come up with something lame like “those are great shoes” or “Did you drive or uber here?” or “Is that shrimp any good”, or “Excusez-moi de ne pas bien parler français” you’re starting a conversation by putting your new contact at ease. You’ll also get time to read them as a person. While everyone’s there to network with other people in the film industry, being nice never hurts. Open an honest, genuine conversation.

Dominating a conversation is never a good idea, whether it’s a Hollywood party or not. If you’re domineering — or even worse:  rude and arrogant — at a film industry gathering, the person you’re trying to “connect” with will likely assume you’ll be the same way if they were ever to work with you. Listening is key to being genuine. Being genuine is key to making worthwhile connections.

Do convey what makes you special. Don’t be self-centered.

Conveying what makes you special means showing the person what you’re passionate about and perhaps good at, but, of course, work it in naturally. If there isn’t a natural opportunity in the conversation for such info to be imparted, don’t force it. Avoid saying things like “Producing is a terrible job” or “I’d never want to be a script supervisor” as it might be perceived as judgmental or insulting.

Do be ready to talk about your work. Don’t pitch.

Tell them what your project is about, but don’t parrot your logline.  That’s what film students and newbies tend to do and it’s awkward. Keep it casual and conversational, and short. Very short.

Do seek your people. Don’t dismiss anyone yet, though.

Many of those who’re already successful in film and television come from “film families” or at least rich families. And that makes sense on many levels, not the least of which is that it’s not cheap to make movies.  You might be tempted immediately to gravitate towards such “established” or “wealthy” people, but keep in mind that many of the people who have had some of the most impact on film and television over the years didn’t necessarily start with such advantages.

If you’re female, you may find a female community to collaborate with and create a new scene with. If you meet someone who’s also from Oklahoma, maybe that’s worth bonding and collaborating over. Keep your mind open when talking to people. Career survival, as well as maintaining a healthy, positive outlook, is about finding people who understand what you’re trying to accomplish as well as helping them to accomplish what they want to accomplish.

Do have business cards. Don’t hand them out like candy.

Sure, you’ve had cards printed. Three hundred of the bastards. And they totally rock and you picked the perfect font and color and you’re ready to fire them out into the world.

But keep in mind that most attendees with some influence in the film business will go home with dozens after a night like this. Focus instead on being a memorable screenwriter (in a good way) rather than “flyering” the party. You want the people you talk to with put your card somewhere special, not spend the next morning trying to figure out if the paper it’s printed on is recyclable. Wait to be asked for your card. Always ask for theirs in return.

Also be aware that there’s different etiquette around business cards in different places. Many non-Americans will find them as quaintly old-fashioned as checkbooks, so don’t judge foreigners who ask for your phone number, Instagram or Facebook instead.

Don’t beg for people to contact you. Do give them a reason to.

Perhaps you’re both making a short soon and want to trade equipment and time. Perhaps you could offer to read each other’s scripts. Look for ways to help people with their projects, or to fill a need on a project they’re putting together. Helping people is the absolute best way to make build solid friendships and contacts in the film industry.

Sneak into the bathroom and write, on the back of the business card which is usually blank, how you know the people you took them from. On the back of a card I took in the producer’s bathroom at AFF, I once wrote: “This card. That scene in American Psycho”. Which is cool, cause after I emailed her with a youtube video of that scene she invited me to an event.

If you agree to help someone, do so professionally. Don’t wait too long.

If you’ve agreed to read a script or give feedback on a short, make sure to do this within about 48 hours, or sooner. The film industry is full of flakes who say they’ll do something but never do. Make sure to distinguish yourself as one of the few solid, reliable people. And do it as soon as possible.

Do be humble. Don’t put yourself down.

Nobody will make you a writer/director/producer. If you’re working on a project, call yourself what you want to be. Never say things like “Well, I’m driving for uber right now but I think I want to be a writer”.

It’s natural to feel nervous when you’re putting yourself out there. At some festival parties and events, the booze is sponsored or even free. It’s good to have a drink of some sort (soda is fine) in your hand, but try not to lean on it. It’s a good idea not to be the person people ask: “I hope you’re not driving?” Films are hard to make. Heavy drinkers tend to be unreliable, even if they’re writers. Don’t appear to people as a potential problem. Be a solution.

Do be friendly. Don’t be a creep.

Does it need to be said?

Do be dignified on social media afterward. Don’t harass people

It doesn’t hurt to like people’s Facebook, Instagram or Twitter posts – but, be selective. Whatever you do, don’t tag people you’ve just met (however positively) in your posts, and don’t reply to everything they post. Don’t start a chat every time you see they’re online. That’s just going to look desperate. Also, auto-replies with your crowdfunding campaign are a massive no-no.

You might notice that nearly all of these suggestions really boil down to common sense. Use yours. Above all, be genuine, be solid, and be helpful. Be the solution.

Television and films aren’t hiring people just to take up space and throw money at. They’re hiring people because they have problems that need to be solved. In this case, it might be a script that needs to be written from an idea on a cocktail napkin, or it might be that their tv show needs a point-of-view from a writer with your particular background. Whatever they need, if you’re a genuine, solid person who’s proven you can be a solution, then your chances of landing the position you’re after shoot up tremendously.

And remember, once you finally do land that gig, it’s time to throw a party of your own.