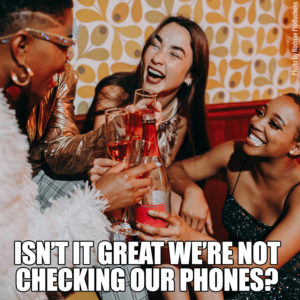 If you’re a screenwriter looking to network at a Hollywood party, you’re in for a wild ride. It’s the age-old cliché of Hollywood:  the industry party, loaded from wall to wall with wannabes, fakers, hangers-on, and phonies.  And they’re all nobodies going nowhere who think they’re somebody.  If you go to an film industry party in Los Angeles, the chances of you running into some of these characters are extremely high, and I’m sure your tolerance for these kinds of nimrods is probably just as low as mine.

But here’s the scoop, screenwriter:  Most parties and events I’ve been to are actually 99% cool and 1% nimrod.  And that’s a lot of cool peeps to add to your network — folks who can actually help you get your script sold, made, or help you take your screenwriting career to the next level.

Now, here’s my top few tactics for screenwriters to use at Hollywood parties. But bear with me.  Some of these sound downright ludicrous and smack of “cheap socializing tip,” but I assure you, they can help:

When you talk to somebody new, try not to scan around the room, looking at other people.  You might just have a case of attention-deficit disorder, but the other person will be convinced that you’re trying to look for someone “more important” to talk to.  Give the person you’re talking to your undivided attention.  Save your looking around for your escape, should you need to make one.   More about escapes below.

Hang out by the food

If you arrive with a friend or friends,  it’s fine to talk amongst yourselves, but only with the intention of bringing new blood into the conversation to talk to.  That is, don’t come with your group and stay in the corner, not talking to anyone.  If you have to “park,” like this, then park your group in a high traffic area, say, by the beer cooler, or the hors d’oeuvres table.  The idea is to have a natural in to meet new people, and commiserating about the food or drink is always a good in.

If you’re with a group, keep the circle open

Having a group is great, because it’s an automatic social circle that folks at the party may want to join.  But it’s important to keep your body language open and welcoming when doing so.  Don’t form a physical circle with all your backs facing outward.  Nobody will be able to get in, and you’re less likely to meet new people.

Put away the cell phone

Which means: Don’t talk on your cell phone, or play with it. You’re not at the party to send text messages or check your socials.  You’re there to mingle.  To meet people.  Like they did in ancient times, long before portable phones made everybody a baboon.  Don’t be 21st century.  Be 20th century.  It’s much easier to meet people that way.  Put your toys away and meet people.

That is, when talking to people, ask about them.  Don’t rant about yourself or your script right off the bat.  This is especially true if you’re talking to someone you know can help your career.   People love to talk about themselves.  As I mentioned, there’s no greater-pleasing sound a human being can hear than the sound of their own name, and their own voice.

After they’ve chatted you up about themselves for some length, if they’re of any social decency, they’ll start asking you questions as well.  And THEN you can start telling them about your screenplay.

But if social decency isn’t their thing, at least the conversation will end with them associating your face and your voice with the good, fuzzy feelings they got while talking about themselves for so long.  And maybe you can use that to your advantage next time you run into them.

Don’t get drunk  (or)  go ahead and get drunk

It’s true:  nobody likes the guy who can’t handle his liquor.  Stay sober enough to carry on a meaningful conversation.  But here’s the ironic flip side of that:

Sometimes the best way to bond with someone, or with a group of people, is to let yourself get trashed.

As long as everybody’s getting trashed, it’s all good.  If you’re trying to get a part or to take a step up on your career ladder, and you think someone at that party might be able to help, and that someone’s getting loaded, join them.  Especially if they’re the only a-hole at the party getting drunk.  By getting loaded along with him, it’s now you two against the world.

This is tough.  I know.  But it really makes a difference.  This is great Dale Carnegie stuff.  He wrote the book How to Win Friends and Influence People.  Even if you meet 30 people in one night, you’ve got to remember their names.  Spend the extra mental energy to repeat each person’s name in your head while you’re meeting them, immediately after you’ve met them, and for a minute after that.

Repeatedly work their name into your questions or your conversation.  Paint yourself mnemonics, visual pictures, of each person’s name and face, if that helps.  Whatever it takes.

Ick.  Such a cliché.  So like all  clichés, you should either find a new way to say it, or tacitly acknowledge that it’s a  cliché while you’re saying it.  Find a different way to find out this information, or just let the conversation flow for longer than one minute and the person will tell you what they do, or you’ll figure it out.

Plan your escape routes AKA your “outs”

If you get cornered by a nimrod or a time-suck, people whom I refer to as “That $&%@& Industry Guy,” you’ll thank yourself if you’ve got an out, so you can extricate yourself from the conversation.

“That $&%@& Industry Guy” is the guy who has nothing interesting to say, bugs the hell out of you, and for some reason, won’t stop talking to you.

My preferred method for getting out of these entanglements is just extending my hand for a handshake and saying “Hey, good to meet you.  I’m gonna mix it up a little.”  Or wrap it up by giving them a business card, but only if it doesn’t open up a new line of conversation.

I try to be as warm as possible.  Depending on how clueless they are, and how long they keep yakking, exploiting my politeness and good nature, I move to the cell phone excuse, or ask a friend to help save me.

But keep in mind, it’s sometimes better invest your time in just one person at the party, and really make a useful connection, than it is to keep mingling around making superficial ones.  Learn to differentiate between someone who’s completely sucking your time, and someone who’s an interesting, genuine human being.

And, you never know. He might be the guy who can get your spec script in front of Will Ferrell.  So be a human.  Even if it hurts.