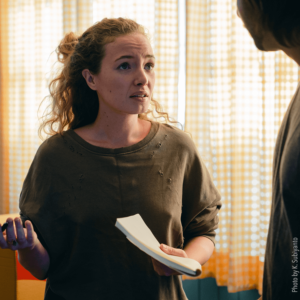 With all screenwriters, it happens sooner or later. Eventually, we all get into fights with producers. Creative, financial, it doesn’t matter – if you’re writing screenplays, and you’re at all successful in getting one of your scripts into any sort of development or production pipeline, you’re going to have a fight with a producer. At some point.

Arguments between producers and screenwriters take on many shapes and sizes. You might find yourself toe-to-toe with an executive producer over rewriting a particular character, or changing a script’s setting from London to outer space. Or you might get script notes from the guy holding all the chips on an indie feature, who’s never made a film before, and who’s suddenly in your face about beefing up a bit part for his buck-toothed son with no talent.

No matter what type of argument you find yourself in with a producer, here are a few tools / ideas you can use to give your screenwriter self a fighting chance:

A screenwriter must always have a contract. Always.

Your first line of defense needs to be a written agreement between you and your producer, or the production. No matter what level screenwriter you are. (see my article on The 5 Levels of Screenwriting Mastery here) While it’s common for new screenwriters to work for deferred pay, or even no pay, on smaller independent / no-budget films, in the hopes of learning, or getting their foot in the door, it’s absolutely not acceptable under any circumstances for a screenwriter to work with no contract at all.

What goes into that contract? It depends. If you’re working as a WGA member, the contract will be a lot different than if you’re working on a no-budget feature. The point of the contract is to protect and serve all parties, no matter what flavor of contract you’re dealing with. It’s an agreement between people; official and in writing.

So while the exact details of your particular contract may vary wildly from circumstance to circumstance, there’s one fundamental aspect about your contract that you have to make sure of before we can even begin to talk about what goes in it, and that’s….

The screenwriter’s contract must be easy to understand

The foundation of all agreement is mutual understanding. If you can’t understand the wording of a contract, you simply can’t have a functional, worthwhile agreement between two parties.

Make sure the contract’s wording is clear, simple, and not overburdened with legal terms. You won’t be able to avoid all legal terms, but in general, the fewer, the better.

A good rule of thumb: the more dense the contract, the more it protects the producer. This isn’t always true, but it’s true enough to get you started.

Once you’ve made sure the contract between screenwriter and producer is written clearly and simply, then it’s time to make sure you get what you want out of the deal. And that begins by playing offense and defense.

By offense, I mean that your contract needs to bring home to bacon. It needs to specify, clearly, what it is you’re getting out of the deal, whether it’s money, backend, tickets to the premiere, a particular credit, access to the set, etc.

Are you getting Associate Producer credit? Put it in writing. Did the producer agree to put it in the opening credits? Put it writing.

Whatever you’re getting out of the deal, make sure it’s in writing, and not just the assurances of the producer who promises to “do right by you.”

By defense, I mean that your contract needs to specify exactly all the ways the producer / production promises to do no harm. For example, if the contract specifies that the producer can ask you to do one rewrite and two polishes, that would serve as an “offense” point for the producer. That is, she’s getting something out of the contract.

Playing defense to that means getting specific. For example, including what exactly a “rewrite” and a “polish” entails, as far as man hours, pages, or whatever other metric you’d like to use. Another would be to set a deadline for those rewrites and polishes, so that you’re not obligated indefinitely to come back and do a rewrite months or even years after you sold the script.

When a contract can do all of the above well, it becomes a powerful mechanism to avoid arguments to begin with. Or an argument does take place, at least the screenwriter can reference the terms of the contract with ease and make her case directly from the printed, signed, and notarized print.

Agents, managers, attorneys. If you’re starting out, you probably won’t have one of these, but my advice is: get one or more of these peeps aboard your team as soon as you can.

They’re quite simply one of the most powerful weapons you can have in your corner when it comes to winning arguments with producers. These people know the business, know the law, know the fine print, and/or all three. With a representative on your side, you can defend more ground more effectively. After all, producers will have their representation. Why shouldn’t you have yours?

Screenwriters need to maintain as much leverage as possible

It’s true that Hollywood runs on favors, to a great extent. If you’re interested in winning more arguments with producers, it’s vital that you only receive favors in a very judicious manner, if at all.

Perks, trinkets, throwaway credits – these are all common gifts that producers have at their disposal to curry favor and get their way. It’s called leverage. And you need to keep that in balance.

Keep your eyes on the prize. Don’t let little meaningless favors from the producer make you any less willing to stand up for your side of the argument.

Make friends on the production

You are not Simon, nor Garfunkel.  Therefore, you must ally yourself with those around the producer, or as many solid people as you can on the project. Being a lone wolf might satisfy your ego, but it does nothing for the screenwriter who’s out to change a producer’s mind about something.

People in your camp = people on your side, generally speaking. Or at least they’re not enemies, and stand a better chance of not getting in your way or working against you when arguing a point with a producer. In truth, the more allies a screenwriter has, whether it’s crew or cast, the more powerful, generally speaking, that screenwriter is. And with that power comes greater ability to get your way.

The best way to win over allies:

If you’re good at what you do, if you’re quick about it, and you’re cool as heck to people, you can’t help but stand tall, like Garfunkel, and win over allies.

On the contrary, if you’re not all that good, take a long time to get rewrites done, or are a general pain in the ass, or even shy or aloof, you’ll find your ally list a pretty short one. Short, perhaps, like Simon.

Don’t begin by arguing with the producer. Try to persuade.

It’s said that once an argument starts, persuasion stops. Researchers recently discovered that once two parties have escalated a conversation to a point where they’re trying to prove each other wrong, both sides dig in, and very little persuasion in either direction takes place.

It has something to do with our biology as human beings. More about it can be read in the Time article here.  The main point is: if you want to win a producer over to your side, you’ve got to do it via persuasion and steady pressure; not via argument.

Don’t let the evolutionary mechanism kick in that prevents us from changing our minds once we realize our perspective or world view is in any way “under attack.” Do all of your convincing, present all your logic, display all your evidence in a way that precludes an escalation to “argument” status.

And I mean “argument” even in the most polite, cordial terms. An argument doesn’t always mean screaming and shouting. It can mean a calm exchange, but if the sides perceive their own views as under attack, even mildly, both sides lose the power to persuade. It’s that simple. It’s that biological.

Try to see things from the producer’s point of view

If you’re looking to win an argument with a producer, don’t be another precious, art-blinded screenwriter. Producers, by and large, are looking at the dollars and the audience and the marketing and the nuts and bolts, sure, but many, many producers are very creative people.

If their argument makes no sense to you, try seeing it from their point of view. Sure, maybe the reason they want the script changed from London to outer space is because they simply want to put their stupid stink on the project for no good reason.

But what if they want it changed because George Clooney has asked them to, and if they do, the movie gets bigger and everybody makes more money?

The more difficult, and yet more common example would probably be: what if that producer wants it changed to outer space because they honestly feel it will make for a better movie?

Hearing them out, wearing their shoes, understanding their creative and commercial concerns, these things give the screenwriter valuable insight that they can use to tailor their persuasion campaign, or, if necessary, buttress their argument.

Don’t get personal, jerk!  I love you.

Finally, If you’re a savvy screenwriter, you’ll never let it get personal. This is a complex, emotional business. If you’re a hothead, or a pushover, you won’t last long. Steady as she goes. Keep the discussion – the persuasion – level-headed, grounded in logic and reason, and make friends with who you think is your enemy. It’s a surefire way to ensure your career longevity in this frustrating, but ultimately super-collaborative industry.

2 thoughts on “How screenwriters can win arguments with producers”