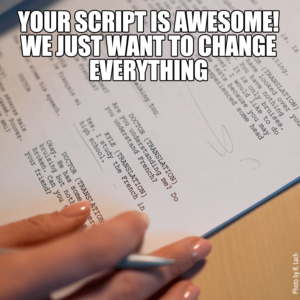 Screenwriting credits get watered down. It’s a fact of life, but it’s not unavoidable.

Let’s say your screenplay is getting made into a motion picture by a mid-sized production company or small studio. Congrats! But that means an entire film crew is going to be reading your script now.  (Or at least skimming it, if you’re a lazy Art Director or something)

That’s a lot of eyeballs to have your script suddenly exposed to. All of its flaws, all of its weak spots… all on display for the entire crew, cast of actors, and yes, especially, the producers; the money-guys (or gals).

And trust me, every script is rewritten during production. Even if the words don’t change at all!

The Director is going to interpret those words according to her vision;

The Actors will deliver their lines in a way that draws on their own life experiences;

And when your script calls for a purple chair, the Art Director will bring in his shade of purple.

Such is the nature of a collaborative art form.

So while collaboration is the name of the game, no matter how many people “rewrite” our script, we screenwriters can’t let the production water down, or even (gasp!) take away, our screenwriting credit, for many different reasons.

Here are three things you can do to prevent your credit from being watered down or obliterated, based on the five feature film scripts of my own which I’ve watched get produced, and crafted into actual feature films.

Hang on to your screenwriting credit by writing great dialogue

Actors are the ones putting their entire heads and hearts into your characters.

And Directors, if they’re good ones, are helping those Actors fine tune those heads and hearts and help link them together within the overall context of the story.

Write scenes with great reveals or great moments. Write them big. Write them small. As long as they have sticking power.

If your dialogue can easily be swapped out with better dialogue, (say, for example, dialogue that even an ACTOR can make better), then you’re doing it wrong. (No offense, actors.)

Make your actors fall in love with who they’re playing.

Make your directors fall in love with the text you crafted.

Then, for an extra layer of defense, link everything up as much as possible, like a Jenga game.

That is, if dialogue is changed by someone later in scene 80, it affects something drastically in scene 23. Or scene 100.

Make it difficult for “quick lil fixes” to be made.

And by the way, if you’re writing well, you’re already doing this, because every good script has links and threads going back and forth throughout the timeline: themes, rhythms, textures. You get the idea.

Even better?  Get the actors and the director on your side!  Ask production or the director if you can be a part of rehearsals, or help with casting.

My friend Steven S., a screenwriter who at this very moment is on location helping his second feature script come to life, reports that the actors on the film said they were happily surprised to have the screenwriter present for so much of casting and even rehearsal.

And he’s best friends with the director.  That makes him a strong screenwriter politically on his film.

Hang on to your screenwriting credit by thinking like a producer

Do an entire draft where you approach your rewrite from the point of view of a Line Producer or UPM, with a 100% focus on the bottom line: how much things are gonna cost, how difficult each scene is going to be to shoot, etc.

If you can merge scenes together to save a shooting day, do it.

If you can turn 15 pages of NIGHT – EXTERIOR into DAY – EXTERIOR, you’ll likely save the production a ton of money on light rentals, avoid a bunch of crazy turnaround and people working from 6PM to 6AM, and a bunch of other logistic crap the UPM has to deal with.

Don’t supplicate your entire creative work to the practicalities of shooting, but do what you can to keep the UPM and/or 1st AD from bitching about how such-and-such scene needs to be rewritten for production.

When the UPM or 1st AD complains, the Producer listens. And if the producer wants to bring you back for these fixes and pay you, awesome. But in all likelihood, he’ll either ask you to do it for free, or, what’s worse, bring in some junior hack writer to make the changes to your script to fit Production’s needs.

And if that happens, good luck. Because I’ve seen many of these “production re-writers” jockey their way into co-writing credits.

Avoid it by thinking like a UPM for at least one of your rewrites, PRIOR to delivering the script to production for breakdown and scheduling.

Alternatively, if you don’t have enough on-set experience, or scheduling/breakdown experience, approach the 1st AD or UPM and ask if they could give you some pointers on what to fix in the draft to make the production scheduling go more smoothly.

You’ll head off the problem of them bitching to the producer about how difficult the screenplay’s scenes are to schedule, and you’ll probably make an ally.

PS – If you really want to win the UPM and 1st AD over, go through your script and change all your SUNSET or DUSK sluglines to DAY or NIGHT.  Either or.  They hate SUNSET/DUSK in the slugline because they never know what to do with it.  If you need to denote DUSK, put it in the descriptive action text below the slugline.

“Excuse me, Mr. Producer, I’m Jimmy, the 18-year-old craft service guy who totally mucked up yesterday’s bagel orders, and keep getting the wrong coffee for the camera team, but I found this glaringly terrible error in the script that, when changed, will save the production a million dollars and make this movie 10 times more entertaining.”

If you’re on set and you hear the above quote, please feel free to shrink to the height of one foot and turn red with shame.  Because you’ve got nobody to blame but yourself.

Oh my, what a predicament.  Here you are, the master of this screenplay; the grand poobah of everything that comprises this wonderful story everybody’s working 15-hours a day to produce, and you botched a bunch of simple stuff in your screenplay which nobody caught until now.

That, my friend, is a one-way ticket to “We need an extra scene written in order to compensate for a scene we lost due to falling behind?  Well, this screenwriter really isn’t all that competent. Let’s give the Craft Service guy a shot at writing it.”

i.e. instead of “Screenplay by You The Screenwriter”…

…the door is now open for the Producers to change the credit to  “Screenplay by You The Screenwriter and Joe Schmoe The Craft Service Guy.”

Or that plus, you show up at the premiere and discover during the opening credits that the Craft Service guy is suddenly your co-writer and Associate Producer.

Wait… How did that happen?  I wrote the entire script, but that guy caught a couple glaring errors, wrote two pages of fixes, and is suddenly my CO-WRITER?  And an associate producer?

Producers, Directors, Money People, Actors – a lot of them are in this business to simply put their balls on other peoples’ foreheads. Sorry if that sounds crude, but it’s the truth. A lot of film folks are seriously more concerned with ego and jockeying than what ends up on the screen.

So if you’re on a team with those kinds of people, use your head and cover your bases when it comes to making sure you didn’t blow it on huge parts of your script.

How to catch huge errors before the script goes into production?  Get it to as many eyes as possible, with the express request of “Help me find glaring errors.”

However you do it…catch those errors!

And write dialogue that actors and directors (and other squishy creative types) will fall in love with, and champion…

There you have it: a few things you can do to protect your screenwriting credit during production.

Full disclosure: this article was written by the author and 128 other people.