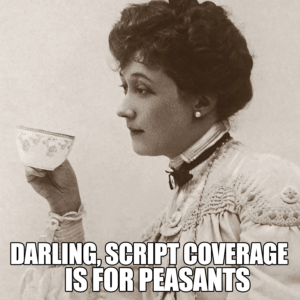 Below, for the first time, I’ve detailed three of our favorite myths about script coverage which are perpetuated by many script consultants. If you hear any of these from a screenplay consultant, hide your wallet!

Myth: “Script consultants give you more than what you get with script coverage”

True, in many cases! But script consultants are generally five times more expensive than script coverage services, with their low-end services starting around $200-$500 and skyrocketing up to the $1500’s and up from there.

I might be drinking too much beer, but from where I sit, the average struggling screenwriter looking to improve her script usually doesn’t have enough money to buy a round of drinks on Saturday, let alone $1500 to spend on a screenplay consultant.

I’ve hired a few script consultants in my time, and flat out, let me tell you – some of them are decent.

But what I really needed to improve my script at that point was just a few different perspectives on what was working, and what wasn’t. And then a suggestion or two on which direction to go when rewriting.

I needed a read or two, not a full-blown screenplay consultant / script guru package.

Script coverage offers perspective in a much more affordable way, because for the price of one script consultant going over my script with a fine-toothed comb, I can order script coverage from multiple script readers, all of which are sure to have totally different backgrounds, (as different humans are wont to do.)

And each of those readers are going to give me a different take on my script. From those different “soundings,” I can choose the script notes I think are coming up in a pattern, and can ignore the rest.

If $200-$700 (and up) is in your budget, and you’re absolutely befuddled as to how to improve your script, a script consultant is definitely one route you could take. But you might be able to spend half of that dough and get the same results, simply by getting script coverage. Or zero of that dough and join a screenwriting community.

Myth: “You get what you pay for”

This is one of my favorites. It’s also a huge favorite of the big script consultants who diss script coverage.

Why I find it hilarious is because of its underlying premise, which is: “Quality can only be attained if you fork over enough money.”

Which is so flatly wrong, and so patently lazy, and so obviously geared towards justifying high-dollar script services, I have to chuckle. And yes, I can chuckle while drinking beer.

Script consultants clearly overlook the wide range of awesome, perfectly suitable options screenwriters have for receiving free script feedback when they float this canard. It’s no longer just a few random forums or social network groups that offer support to screenwriters — it’s an entire world of blogs, forums, Twitter DM groups, Facebook groups, Reddit groups. As such, script consultants barking “you get what you pay for” are proving how out of touch they truly are with the needs of a workaday struggling screenwriter. Nobody has to buy your service, or any service! The wealth of knowledge and insight available online for free, or via local writers groups, or via networks of filmmakers and other film-industry folks grows every day, so don’t tell me quality script feedback can only be purchased.

At my company, we sell script services, absolutely. We make no bones about it. (We leave the bonemaking up to our good friend, calcium.) What we don’t do is lie to screenwriters and tell them we’re they’re only hope. We say repeatedly: Get as much free script feedback as you can before buying our services. We’re here as an option, just like screenplay consultants are an option, and just like all the free feedback available through the aforementioned means are an option.

Think about it. How long would any script coverage company be in business if they hired folks to do their coverage who didn’t know what the heck they were talking about?

Every script company worth its salt does a great job at screening their script readers for maximum entertainment industry experience and script analysis skills.

UPDATE: It’s been a few years since I originally wrote this article. And in that time, scores of new script coverage companies have popped up, many of whom I’ve seen the actual coverage from, and have done subsequent research on.

As a result I’ve discovered, unfortunately, that the above “myth” is, sadly, starting to be more and more true, as a great number of these newer companies are clearly using interns and underpaid readers to churn out their sloppy, half-baked feedback. Including one or two companies with great brand recognition.

That being said, there are still a great many of us out there who do not work with interns and pay our readers very well for their services.

Script consultants and script gurus have every right to tout their experience and skillset, but it’s often done by contrasting themselves, unfairly and inaccurately, against a whole population of super-talented workaday script readers.

(And besides, that’s just patently offensive to some of those really talented college interns and underpaid wage slaves we all know.)

So take it all in, gentle screenwriter. There are many tools available in your toolbox, and not all of them require a cash outlay. Script consultants are fine, paid script coverage services are fine, but just (A) if you’re short on cash, make sure you exhaust your free options before paying for any of these things, including my company, (B) make sure the screenplay consultant isn’t shilling for her own company by putting down others, and (C) make sure the company or person you’re hiring to read your script isn’t selling you the work of an intern, or some underpaid lackey.