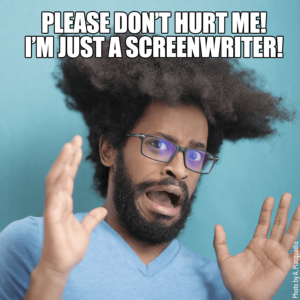 Telling a screenwriter that his script needs work isn’t easy. There are three immutable laws that govern screenwriting writ large:

1) Everybody has a script

2) Everybody is a critic

3) Some screenwriters aren’t quite good at handling honest feedback

Me, despite doing script notes for a living, I still do get the occasional friend read, and you may be surprised to hear:

And what may even be more surprising:

You want to encourage them, but right now, for whatever reason, they’re just not in a place to able to handle brutal honesty or criticism about their work.

So what do you do when you tell one of your buddies like this that you’ll read his script, but it turns out, he wrote a real Deusenberg? (see “deusy”)

The best method is to be 100% honest, even brutally honest, with your pal.  As screenwriters, we all know that method.  Or at least, should.

But what if the situation calls for a little more, well, nuance?

If you need to tell your friend that his script blows, but aren’t comfortable doing the whole “Sit down, bud. Let me tell you why and how you screwed the pooch” thing, then allow me to share a few of my own more slightly tactful tactics:

Instead of giving the writer some script notes, ask questions

This method involves you, the script, and the screenwriter. Oh, and a whole heck of a lot of questions you’ve prepared.

Write down a list of everything you think is wrong with the script, just as you would when writing regular script notes, but then reword all your notes into questions.

For example, instead of:  “The way Bob dumps Charlotte is totally cliché,” you’d ask your buddy “Can you think of a more original way Bob can dump Charlotte?”

That way, you’re saying the note, but phrasing it delicately, and letting the screenwriter “do the math,” so to speak.

And not only that, you’re sort of throwing down the gauntlet.  Because what you’re really saying is “Okay, so you say you’re a screenwriter, which means you’re supposed to be all creative and sh*t, so go ahead and prove it, bud.”

Ask the writer to critique the script with you

Taking your friend page by page through the script and asking him to clarify things, from entire sections to little beats, is a great way of forcing your screenwriter pal to confront the malfunctions head on.

If possible, meet in person and have a printed out script ready.  And super important:  make sure you’ve made RED MARKS all over that script.  You don’t necessarily have to go over each and every red mark, but the idea is to give the sensitive screenwriter the impression that “Oh wow. My friend didn’t like my script so much. Look at all that red!”

That is, even though a lot of those red marks don’t come up in your conversation, they still may have a big impact on your screenwriter pal, by transmitting the idea that he’s still got a lot of work to do on his script to make it presentable.

Ask the screenwriter compare and contrast other scripts that are working

If you can find a similar movie to what your screenwriter friend is going for, do it.  Then find similar plot points/character moments/characters between the two and point them out.

For example, if they’ve written a pilot for a series similar to Homeland, but their main character is a bit vanilla and boring, bust out Homeland’s main character, Carrie Mathison, and point out how she’s got an issue with prescription meds which makes her a bit erratic, and a lot erratic at times.

Your friend seeing for himself what actually works, and you breaking it down for them in an illustrative fashion, depending on your friend’s mindset, can often have tons more impact than just simple plain brutally honest notes.

Help the screenwriter rewrite the script

If you and your friend are open to collaboration, and you have something meaningful to add to the script, and most importantly, your friend agrees, why not help rewrite it/polish it/tweak it?

I’ve worked with several co-writers over the years, and each time I have, my screenwriting skills have increased dramatically.  Of course, I suppose if you team up with a moron, your skills could atrophy just as easily, but you get my drift.

You know the old screenwriting tenet:  “Show, don’t tell.” ?  This is a prime example.

Avoid giving them script notes at all

And of course, there’s always avoidance. If your friend’s script is completely irredeemable, or your friend himself is completely unapproachable or unreasonable when it comes to script notes, you can always just, well, dodge the question.

I don’t recommend avoidance as your first option, especially if you’re interested in building/maintaining a healthy friendship.

But we all know: sometimes things are better left unsaid.  Right?

One somewhat useful way to stall or avoid giving notes is to turn in your script notes in a way that ensures they can’t be opened.  How?  Take a JPG or a and rename it with a different file extension.

OR, you can use this handy little online tool: Corrupt-A-File

But remember, all these are second fiddle to giving it straight to someone.

Nothing beats honesty, and directness.  Subterfuge only goes so far.  So if you’re a true friend, make sure you do your best to wean your friend off of his super-sensitivity, and get him to understand that the only way he’ll grow as a screenwriter is to be able to handle the 100% brutally honest truth about his screenwriting.