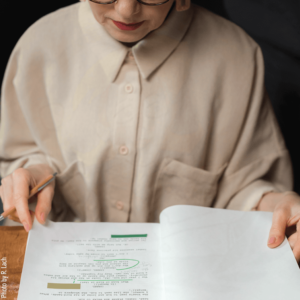 Script coverage and script notes are two different beasts , but are really not all that far apart. Here are the primary differences:

In a nutshell, script coverage is 2-4 pages of synopsis, comments, logline, and header information. It’s a quick doctor visit.  Is the patient’s pulse and blood pressure okay? Does the patient present any signs of flu?  Turn your head to the left and cough, etc.

Script notes are more of an MRI, with detailed images of deep inside the body. They run anywhere from a few pages to 10, sometimes 15 pages.

Coverage typically  has to stay within a more brief format, as it originated as a fast way of conveying the quality of a screenplay to a producer or agent, saving them the time of having to read the script itself unless something in the coverage caught their eye.

Because script coverage started out as a way for agents and producers to sort of “skim” through their piles of screenplays, coverage, by and large, has never been directed to the screenwriter.

That is, it’s only very seldom been written as if the script analyst is speaking to the screenwriter.

More often than not, the script analyst/script reader at a studio or agency will address the agent or producer in the coverage, because script coverage has always been, up until recently, a largely “in-house” endeavor.

So in such coverage, along with notes about the characters and plot and functionality of the script in general, you might also read things like this:

“We had a film like this on the slate last year but Tom wouldn’t green light it.”

“I like the characters, but we’ll need to change one of them to a teen if we’re shopping this at Paramount.”

So script coverage has a heritage of being largely not written as if speaking to the screenwriter, and that’s what my company Screenplay Readers tries to stick to.

Bottom line: script coverage is generally talking to a higher up, script notes are talking more directly to the writer.

Script coverage, along with its mandated brevity, has a more specific look and feel than script notes.

Script coverage generally has headers at the top with the script’s info (writer, date, genre, etc), but script notes traditionally don’t stick to any one particular format or style, unless you’re writing notes for an agency or studio that likes to stick to a template.

And by the way, all that changes every time a new boss comes in and shakes things up.

When you see a chart of categories, with ratings next to each, it’s probably going to be script coverage, rather than script notes, although they’re seen in both formats.

There’s really no hard-and-fast rule for what script coverage looks like, but, if you can imagine this, there’s even less constraints on what script notes look like.

Whether you’re paying for script notes or getting them from a development exec, you’re probably getting the absolute best ideas that person can come up with.

If at a studio, that person has a vested interest in making the script better, or in pleasing his boss, so they’re not going to hold back their best notes. (Or what they consider to be their best notes at least.  You may not agree.)

If you’re paying for the script notes, the analyst has a vested interest in making sure you get their best work possible as well.  Otherwise, you won’t come back.

Script coverage, because of its main restraint – brevity – can often preclude some of the script analyst’s best notes.

In addition, when a script analyst has to write two pages of comments, it’s one thing.  They force themselves to focus on the biggest problems, and by and large just point them out, with maybe a few suggestions on how to fix.

But when she has to write ten pages, it’s a totally different beast, because when you’re free to write ten or more pages, your mind can wander a bit, and really get those juices flowing.  You’ll lose some of the brevity, but you’ll probably get a lot more detail and a lot more brainstorming.

That being said, you might not agree with all that brainstorming. It might be two pages of good stuff and eight pages of pages of hooey, and you’d be better off with just those first two pages.

Some writers and filmmakers prefer the succinctness that coverage offers.  Some prefer the long form of script notes.

Some writers prefer the sort of “litmus test” that coverage provides to give them an idea of how an industry reader at a big house may respond to their screenplay with two pages of how to improve it.  Some prefer the one-on-one, super-detailed, more expensive route of script notes.

Whether you’re getting script coverage or script notes, paying for them or not paying for them, the best practice is to take advantage of both when the moment calls for it.  This, of course, in addition to making good use of writers groups, screenwriter friends and other free sources of feedback.

Which do you prefer?