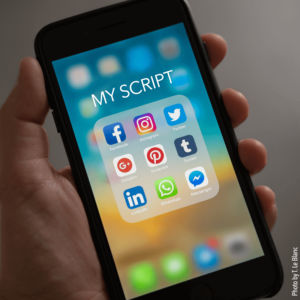 Carrying a printed screenplay around is not an option anymore. Of course, you can do it, but what a pain!

Imagine you’re at a backyard barbecue in Encino, visiting with some old friends and having some vegan ribs. Then your friends’ other friends show up. And the wife is one of the small handful of people in the film industry who’s able to greenlight films, or buy spec scripts.

And you hit it off really well with her, talking about your mutual love for cinema, horror movies, Spike Lee movies, and your mutual disdain for the idea of The Hobbit being presented in the video-looking 48 FPS frame rate.

Then it comes out:  you’re a screenwriter and you’ve written a script that may be a perfect fit for what she’s looking for.

What do you do?  Run to your car and come back with the printed script you keep in your backseat? Awkward. But sure, you could do that.

Or you could send her home with your script in her pocket.  And no, I’m not talking about a 120-page stack of paper.

Here are a few recommendations for keeping your script “on you” at all times, and ready to hand to someone who may be able to help your writing career.

Carry your script on CD? No.

It’s kind of 2001. And it’s very clunky. Sure, a few people have computers that still use this old spinning optical disc technology, but it’s probably not most people. So you may want to skip this option. That said, if you’re working the room at a convention where not everybody is hugely tech literate, like in a developing country, or at a remote island outpost in the Pacific, I suppose the CD could be a viable alternative.

Usability: Nobody can open CDs anymore. Or it’s super rare.
Portability: Clunky. Quite clunky.
Price: $.10 per disc or so
Wonk Factor: You’re your grandma

Store your script as an email attachment

It’s kind of 2004, but when PDFs were finally getting to the point where everybody knew what they were and how to open them, emailing scripts as attachments finally caught on.  It’s still the most common way of transferring a script.

But there are several things that make this option somewhat less palatable:

One, if you don’t know how to create a proper sized PDF of your screenplay, it could end up a bit too big to email for some folks.

Three, if you email your script, you never know if they’ll actually get that email, or if your script ended up in their spambox, or ignored, or deleted.

That said, storing your script as an attachment in your email app works and is quite common.

Usability: Everybody can do this
Portability: N/A
Price: free
Wonk Factor: You’re kind of old school, but hey, it works

It’s kind of 2007, but USB drives (aka flash drives or thumb drives), which used to cost $50, $70, or more for just a 500MB drive, are now super super cheap. (Even a humble 16GB thumb drive can carry around probably close to 120,000 screenplays in PDF format. So for one or two scripts, yeah, it’s kinda overkill, but you can’t beat the portability if you’re talking hardware.)

Carrying a flash drive in your pocket with your script on it means as soon as you make a connection at a party, you can literally hand them your script.   And the drives are so small, they can easily fit it in their pocket, or even a clutch, if you’re out somewhere fauncy fauncy.

And PS – you can find places online like FlashBay that’ll even print your name, email address, and/or logo on a set of custom thumb drives, or even wearable thumb drive bracelets.

(Talk about portability! You can just take it off your wrist and give it to your mark to put on theirs or stuff into their pocket.)

Usability: Everybody! Unless living in cave.
Portability: Tiny
Price: $1-20 per drive, depending on what size/custom printing etc.
Wonk Factor: You’re tech savvy but a bit dated

It’s kind of 2011, but the IR code works too. IR codes are those crazy looking UPC style patterns you see everywhere.  Most smartphones have apps that can scan that IR code and send your interested movie producer anywhere on the web to read your script.

It takes a little bit of setup to create the graphic, and then to put your script PDF online somewhere accessible, such as a sub-directory of your website, or your shared Dropbox folder, but once you do, you can just store the IR code in the Photos section of your smart phone.

Then, if the person you’re talking to at that party has a smart phone, you can just whip out your smartphone and display your IR code and have them scan it, and they’ll be taken to your script online.

Usability: Not bad. Most folks know how to scan an IR code and know they’ll be taken to a website when they do.
Portability: Awesome
Price: Generally free, but it takes a bit of setup, and you might need a website.
Wonk Factor: You’re a nerd

Store your screenplays in the cloud!

It’s kind of modern, and you should do it! Put your script in the cloud on one of the major sharing services, such as Dropbox, or Google Drive, and simply text a share link to any interested parties. Or, use AirDrop to beam a file from your iOS device’s files to any other iOS device in range.