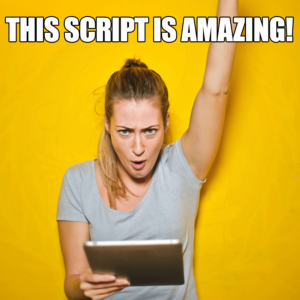 Has your screenplay ever received a RECOMMEND when getting script coverage?  As a script analyst running my own script coverage company, Screenplay Readers, I’m constantly bombarded with questions from screenwriters and producers, but perhaps no question is asked more than:

“What do I have to do to get my script rated as a RECOMMEND?” (As opposed to a PASS or CONSIDER. All three of which we explain here.)

There’s two versions of the answer to that: the Overly-Simply Answer and the Truth.

The Overly-Simple Answer is: write a good script.

The Truth is: there’s no surefire way to make any given script reader like your script enough to give it a Recommend.

But,  after replying to email after email over the years, trying to give a nuanced, contextualized answer to many dozens of inquiring screenwriters and clients, I finally realized that there were actually a few basic things one could do in order to at least boost their chances in landing that elusive RECOMMEND when getting their script covered.

Demonstrate that you’re a professional

Many screenwriters are part-timers, first-timers, or hobbyists.  And there are many talented folks in those categories.  But realize this:  When a script reader rates your script with a RECOMMEND in her script coverage, that reader is sticking her head out big time.

Because that reader is essentially saying to their boss, whether it be an agent, producer, studio head, or big time financier, “Hey, I personally vouch for this script.  If you take it home and spend 2 hours reading it, you will not be disappointed.”

And that boils down to:  “Hey, spend two hours of your time reading this.”

Which further boils down to:  “Hey, take two hours away from spending time with your kids, or making money, or picking up your dog from the vet, and read this script.”

No script reader in their right mind is going to stick their neck out for you unless they feel reasonably certain that your screenwriting is of professional caliber.

Connect with the reader

Straight up:  If the reader doesn’t feel anything emotionally, or get excited about your story in any way, you’re sunk.

But here’s the great part:

Once you’re past showing the reader that you’re a professional, and that she doesn’t have to worry about typos, crappy script format, and bloated text all over your script’s pages, her guard is down.  Not fully down, but down enough for you to have the opportunity to stick her right in the heart; to move her; to excite her; to make her laugh and/or cry.

So how stupid would you be to not take advantage of that?

The dirty little secret:  script readers want to be moved. They love movies.  They love being stirred to great heights, and plummeted to severe depths, during a movie, or else they would have not become a creative part of the film industry.

So make sure your characters aren’t just text on a page, but actually do and say things that move an audience, and your script reader, as that first audience, will love you for it.

Make the reader ask “Why didn’t I think of that?”

Script readers are often screenwriters themselves.  Or producers, or actors, or directors. And that means they can probably recognize an awesome story idea when they see it.

Sure, there’s always room for the soft concept pictures, but the high concept/strong concept screenplays are the ones which stand the best chance of getting produced.

So is your script high concept?  Pitch the logline to a friend who hasn’t heard about it before.  If they don’t say “Wow, that’s an amazing idea,” you probably don’t have a high concept.

Have a unique voice, and don’t chase trends

“Shiny vampire movies are hot this year!”  But you shouldn’t concern yourself with that.  Don’t be a johnny-come-lately and think that just because you’ve written a script that seems like a great knockoff of a popular blockbuster that that script is going to get any traction.

Keep in mind, by the time your script weaves its way through the Hollywood development maze, the concept you’re hitching your wagon to may have long ago become a tired, overdone joke.

By and large, the good producers, the good agents, the good directors and actors, aren’t looking primarily to capitalize on the latest, hottest box office trends.  Yes, they want to make money, and make big money, but the truly talented folks that will make your script a reality are the ones who tend to go for high concept first.

Actually use the feedback you receive

That is, listen to people who tell you how to fix your script.

If someone’s taken two hours out of their lives to read your script, and another hour to provide you with feedback or notes, there’s probably something in those notes you can use, so pay attention!

Don’t be an island and think your shinola doesn’t stink, and that your script’s the greatest thing since sliced mayonnaise. Filmmaking is a collaborative effort.  It takes many minds to bring a film to fruition, and to market.

And despite the romantic notion of the screenwriter-auteur,  if you’re lucky enough to have your script considered for purchase or development, as a first time screenwriter, you’ll be extremely lucky to be even kept in the loop, let alone kept aboard as a creative force,  as your script goes through development and other writers are brought aboard by the producers in order to punch it up or make it easier to shoot.

So learn to let go of your ego.  Take those notes.  Listen to the good, listen to the bad.  If you can get your script sold, you’ll be in a much better political position to have more say on the next one.