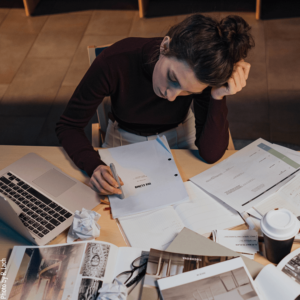 Like cinema itself, script coverage was born out of pure, unadulterated necessity.  Or something. Here’s how it happened:

Somewhere in the early 20th century, a cinema mogul stood over a stack of scripts and said to a secretary, “Secretary, I don’t have time to read all of these scripts, but I need to know which ones are good. Write me a brief report on each one and tell me which ones I need to read.  I’ll be in my trailer, eating cheese.”

And so, the studio script reader was born.  So producers could eat cheese.

And from its inception, writing script coverage has been a task that pretty much anybody with a background in the basics of screenwriting could figure out how to do very quickly: read a script, write a synopsis of it, then report where it works and where it goes wrong. So chances are, as a screenwriter yourself, you’ve probably enabled your fair share of producers to enjoy that cheese. In whatever trailer.

And woe to the countless screenwriters who’ve turned in their hard work, only to have it read by a script reader and dashed apart upon the midnight shoals of the great Hollywood Babylon.  Script coverage is a term many writers despise. To them, it represents the cheap, rushed, short-shrifting of months, even years of their hard work.

But then there are those of us who understand the inherent benefit of script coverage as a screenwriting tool.

And of course, I’m biased because I run Screenplay Readers, which is, well, a script coverage company. (Here’s a link to our services page.)

But for those of we who can see script coverage as a useful tool in the writer’s toolbox, let me ask you this:

Lo, and yea, and verily, the benefits can be massive, not just for the script itself, but for a screenwriter’s long-term ability to distance herself from her own work, which I believe is vital for any screenwriter looking to grow in her craft.

If you’re down for it, here’s a few things I recommend you put into practice when reading your own screenplay for coverage:

Remove your writer self from the outcome

The first and most important step you can take to doing your own script coverage is simply removing yourself entirely from the outcome. Your ego, your stakes, your haircut, your skinny jeans, what you have invested in this script – all of it has to go before you sit down to read and cover your own script.

If you finish a draft and give it a few weeks before you read your script, you’ll be able to come at it more fresh, but you’ll still ultimately know every juicy nook and cranny, every twist and turn, so you’ll have to maintain a constant vigil of separating yourself the script reader from yourself the screenwriter.

Don’t be afraid to be hard on your writing

One common, permeating thread in nearly all script coverage is the injection of rage into the script read.  I know it sounds crazy, but every script reader, at some small level, loathes every single script they read, whether it’s good, bad, or completely-off-the-hook trash. So if you want to give yourself a true-to-real-life coverage experience, see your script through the eyes of someone who, by page 2, hates you as a writer.  Imagine yourself as that worst-case-scenario reader at an agency or studio, who’s just angry at the world and out to burn every script that crosses her desk.

It’s within that ball of flaming anger that you can temper the steel of your script, make it stronger. Anticipate what the worst, most atrocious script reader would say about your script and proof your script against it.  It doesn’t matter how idiotic.  Scripts are passed on for ridiculous reasons, anal-retentive reasons, illogical reasons, and all sorts of other reasons you have no other control over.  But if you can anticipate, you can inoculate against some of them.

Come up with constructive critique of the script

Ah, but if a hater script-reader turns in a coverage that’s 100% pissed off, her boss might not appreciate that. So it’s important to be generous and kind to yourself when reading your own script as well.  Take your hatey, angry comments above and force yourself to phrase them into more generous, articulate words.  The very act of “distilling” angry coverage comments into constructively-critical comments forces you to come at the particular problem in a different way, at least in describing it verbally, and that different way opens the door to all sorts of possible fixes for the problem.  That is, by simply rephrasing an angry comment into a constructively critical comment, you could end up synthesizing a great new fix for your script.

Read your screenplay quickly and see what you miss

As screenwriters, we tend to blow through our own pages, skimming ahead to where we want to work on things, blasting through scenes that may need attention.  As a result, we’re sometimes left with that “glazed donut” stare on our face, because we’re so completely numb to the actions and feelings being expressed in our script that we lose perspective on what’s working and what’s not working, which then dumbs down our ability to approach the material fresh and pull off a great rewrite.

But as a script reader for your own script, I encourage you to speed up. At least for one pass of the read.  Skim.  Blow past huge blocks of texts.  And by the way, huge blocks of text shouldn’t be there anyway, as you’re not writing a novel. To see what I mean, check out this great Writers Digest article here on the differences between novels and screenplays. The point is that every script reader, and I mean every script reader on the planet, generally reads any given script as fast as they can.  Some do this because they’re lazy, but most do it because they want the read to feel as close to a movie experience as possible.  Or, more accurately, a movie that’s set to “slight fast-forward.”

I absolutely recommend slowing down when rewriting your script.  Focus on every single word. Every single period or comma.  But for a read where you’re giving yourself script coverage, if you can approach your read with a fast eye, the idea is to trip yourself up, as a script reader reading it so fast would trip themselves up, to the point where you have to scroll a few pages back to figure out what’s going on or why a particular line is there.

The goal is to make your script as perfect as possible, even on a high-speed skim.  That is, even if a script reader skims your script, or reads it super fast, they still get it, 100%.

When writing your own coverage notes, write it like a script reader doing script coverage would:  brief, and focused on the larger problems of the script, with relatively less focus on the minutia. For extra points, pull your hair out in random intervals and throw the script around the room a few times.

Seriously though, the larger problems of the script are the ones coverage will tend to point out, and those are the problems that will ultimately dictate whether or not your script gets passed up the food-chain to the producer or agent, so stay in “big problem land” when writing your own coverage, and fight the urge to get into the nitty-gritty “script notes” kind of notes.

Force yourself to rate your script on a scale from 0-100 in the following categories:  conflict, character, dialogue, plot, marketability, and presentation.  Be as objective as possible.  Seeing your script’s problems in numerical form is key to thinking like a studio reader. All the better?  Be stingy with your digits.  Be honest and brutal with yourself, like them Soviet judges from the Olympics, who loved to poo-poo American athletes with bad scores.

Sit on your script and coverage for a few days

When you’re done, put the coverage away, as well as the script, and don’t look at either for at least two weeks. Go fishing. Get lost in the mountains and require Search and Rescue to find you with helicopters.

The goal with this entire exercise is distance, remember?  The more distance you have, the fresher you are when you come back to the material. Like a summer’s eve.

The biggest goal from all of this?  To think like script reader.  To think like a gatekeeper. To think like that person in that office who has your script in their inbox and is going to decide whether or not to pass it up to their boss for a read.

Lose yourself, and you can find yourself.