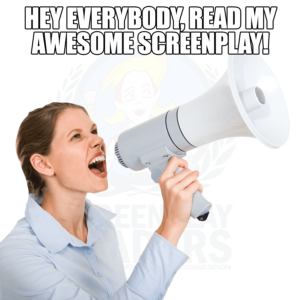 “Social media for screenwriters.” If you’re like me, those words, in that order, read like a potential car wreck.

That said, aspiring screenwriters, can and should use social media. It can be a great boon to meeting people, making friends, and securing the types of contacts you need to help your career.

But keep in mind — there are a few “best practices” you might want to put into action when using social media as a screenwriter.

Film and television are collaborative media, and you don’t know who you’re going to be working with in the future. That means you’re responsible for the impression you give people and the reputation you develop in the public sphere.

Here are a few of Screenplay Readers’ basic guidelines on how screenwriters can get the most out of their social media experience, without self-immolating in the process.

Social media has a volume problem. It’s true. Too many people posting too many things. It’s can be maddening.

That’s why it’s incredibly important to make sure that whatever you write or post needs to be worth someone’s time.

As a screenwriter, your social media presence is a platform to show the world you’re funny, smart, engaged with the craft of screenwriting, or are fluent in the language of film and television. (Or, at the very least, know how to form complete sentences.)

And some screenwriters have even parlayed their social media personalities into actual screenwriting careers. (Megan Amram, writer of The Good Place and An Emmy for Megan is one example.)

Smart screenwriters turn off their auto-responders and auto DMs

When I follow someone on Instagram and immediately receive an auto-reply message like this: “Go to gofundme.com to support my short film Male Menopause”, I usually unfollow right away. These kinds of social media accounts tend to pop up until they get your money, then vanish. On the other hand, if you’re a screenwriter sending a personal (non-automated) message regarding something you’ve discussed with someone in person or at a social gathering might be totally appropriate, particularly if it underscores how you might be in a position to be able to help that person with whatever project they may be working on.

Be not only a good screenwriter, but a good human

Engage when you feel passionate and post what you believe strongly, that’s your bag. It’s totally fine. But whatever you do, do so with as much respect as you would if you were face-to-face with live human beings. One bad response or overly self-righteous or misinformed political post can live on the internet forever. Sure, you might be able to delete that post, but if someone has taken a screenshot of it, it could return to haunt you.

Nobody I know likes discovering blatant “hey look at my project” DM’s on their Twitter, or likes to be tagged on Facebook because someone’s advertising X or Y film or raising money for their project. If someone other than a close friend tags me in order to make sure I look at the film they’re advertising, or to draw my attention to their webseries, I’ll ask them nicely the first time not to. The second time, I unfollow them so that they can’t do it again. This goes double for anybody who’s not actually on my friend list, or I don’t know. Assume others apply those same standards before you decide to tag people willy-nilly or advertise your projects in similarly annoying ways.

Smart screenwriters are mindful of their tone on social media

Boasting, whining, selfies, subtweeting (slyly commenting on someone’s post/tweet without calling them out by name) — try to avoid all of these.

It’s okay to tell the world when you’ve had a success (e.g. maybe you got positive feedback on a script you’ve been killing yourself over or placed in a competition.) Announcing success now and then can even encourage others to keep trying, but keep it balanced. Sadly, nobody wants to open their Twitter feed every day only to read yet another tweet on how awesome you think you are.

Sometimes you may need to vent about a personal event (e.g. a dispute with your landlord, or a fight with your partner), but try to keep that stuff out of the public sphere as best you can. You might feel the world is against you, but be aware that if you seem like a mess online, folks might doubt you’ll be able to handle the stressful experience of writing a movie.

Even if you bitch anonymously (or, again, subtweet) be aware that the person you are talking about will probably guess you mean them, and a whole lot of others might bet paranoid.

And selfies? If you absolutely must post them, consider limiting yourself to posting two per year, maximum.

Smart social media screenwriters never forget who their audience is

When posting anything on social media, always be aware that you’re broadcasting — and speak accordingly. Facebook, just for instance, used to be a place where you could speak to friends and contacts, but even those who are more guarded about who they connect with lose track of who they follow or “friend” at times. One quick litmus test to see if you may be following too many people on Facebook, in particular — if you see that someone’s birthday is coming up and you have no idea who they are, you may want to consider paring down your friend list.

It all boils down to some questions you should ask yourself before you post anything online:

1) Is it something I don’t mind the whole world seeing for the rest of time?

2) Would I say it to if I were face to face with a live human being or addressing a crowd?