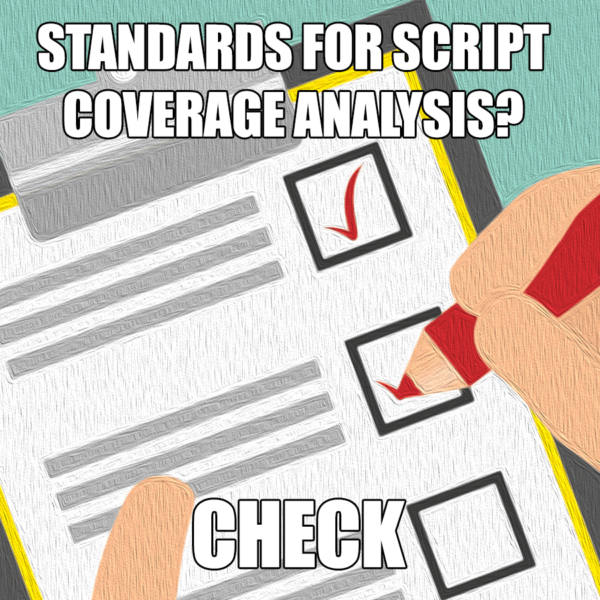 A writer in my class the other day asked me “Is there a standard approach for doing script coverage analysis?”

The short answer is no. There is absolutely no standard approach for doing script coverage analysis AKA notes AKA comments AKA evaluation AKA feedback section of a coverage that readers take when preparing their analysis.

There is however, a very common way of doing script coverage analysis wrong. Many readers, when starting out writing coverage, take what I call the “angry movie reviewer” tone. By that, I mean that they write from a position of haughtiness and superiority, coupled with a way of phrasing things that makes them sound like they’re reviewing a finished film.

That “angry movie reviewer” tone is a very common and unfortunate pattern I see with newer script readers writing coverage.

As far as a standard approach to doing script coverage analysis right? No.

However, a common approach to script coverage, and the one that works for me and for many folks on my team is to jot down quick notes as we’re reading a script. They can be “shorthand” notes like “Tim’s motivation weak.” Then, when we’re done reading, we go back and look at our brief notes and then we start to expound upon them — going into much greater detail now that we’ve finished the script and can process that particular note within the context of the entire story.

The “Check-The-Boxes” approach to script coverage

However, many newer readers prefer what I call the “Check-The-Boxes” sort of analysis. That is to say, creating a set of “boxes” such as Dialogue, Structure, Pacing, Story, etc. and then to force themselves to make notes in each “box.” That is to say, they finish the script and then make all their notes about Pacing in the Pacing section, then they make all their notes about Dialogue in their Dialogue section.

In fact, many many contemporary script reading services, contests, and festivals template their coverages this way, with several specific categories (e.g. Pacing, Dialogue, etc) and framing their notes this way.

That said, when a reader gets a bit more experience at reading and analysis, invariably, she starts to notice how difficult it’s becoming to force the notes into such arbitrary “boxes.” This is because the more experienced the reader gets, the more she understands how interconnected everything is.

That is to say, once a script reader starts getting more experience reading scripts, they understand that Pacing, Dialogue, Structure, etc. are all not separate entities, but all play off each other. Dialogue, for example, has a huge impact on Pacing. Structure becomes stronger if Pacing is on the mark. Conflict is weak if the Structure is off due to Pacing. Things like that.

And more importantly, it’s incredibly easier as a reader, and faster, to make comments / analysis on a screenplay when you can think *across the boxes* — across the categories — rather than forcing yourself to write your analysis for each particular category (e.g. Now I’m going to write about the Pacing. Next, I’ll write about the Conflict.) When you start seeing how everything is interconnected, your notes flow a lot more quickly, and I would argue, they’re more helpful to the person reading them.

How do I evaluate a script as objectively as possible?

First of all, use language that’s as professional, calm, and neutral as possible. This means, yes, avoiding the angry movie reviewer hyperbole, but also avoiding “absolutes.”

Absolutes are things like “This film will never get made.” (“Never” is the operative absolute there.)

“This script is beyond bad.” Not only is this emotional and hyperbole, but it judges the script and offers no value.

Second, nobody should ever ask you to put down your personal or political beliefs, but as readers, we work best when we’re diplomatic. As such, we need to learn to constructively criticize things we may personally find distasteful or offending.

For example, if a script you’re reading is clearly something written by some male chauvinist who’s completely tone deaf, your job isn’t to change the male chauvinist writer into a better human being. Your job is to stay on point and critique the screenplay. The best analysts, however, will be able to *comment* on the chauvinism in a way that helps the person reading the coverage, whether that’s a producer, contest judge, or the writer himself.

An example of what *that* would look like would be something like this, after the regular notes on the story are already on the page: “Finally, this reader advises caution with regards to the overall tone of the script, which many potential future readers could find offensive.”

But more than that, it’s being able to temporarily put aside your tastes in genre and voice. If you want to call yourself a professional script reader, you’ll need to be able to constructively critique scripts from genres and voices you don’t necessarily like or understand. You need to be able to speak the language of all genres, and know what makes a good script or a bad script within all those genres, even though it might not be a genre you gravitate towards. Even though it might be a genre that repels you. (That said, hopefully you’re not reading a whole lot of those.)

A script reader can never be truly 100% objective in writing analysis for script coverage. It’s a very subjective endeavor. You’re telling the writer or the producer who submitted the script what you think, what you feel, what your opinion of it is. That’s subjectivity. The best script coverage, however, divorces itself as much as possible from the personal opinion of the script reader and focuses as much as possible on whether or not the script is working according to the best practices of screenwriting. Admittedly, those best practices shift from time to time, but what remains the same is the question of whether or not the audience is engaged with the story and if that audience is entertained by it.

1 thought on “Is there a standard approach for doing script coverage analysis?”