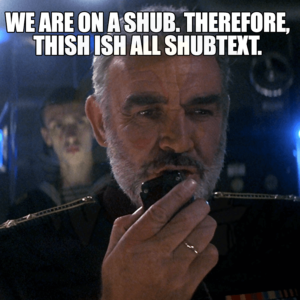 At the end of Arthur Miller’s classic feel-good play Death of a Salesman, the central character Willy Loman tells his son Biff that “the woods are burning.”

Now, for those of you who haven’t read or seen the play before, let me assure you that no actual woods are burning. It’s a metaphor — a way for Willy to articulate to his son that things are not good.

Of course, he can’t just say “Biff, due to the flaws in my fundamental understanding of society, I’m experiencing a breakdown of personal apocalyptic proportions. It’s likely I’m going to kill myself.” If Arthur Miller had written that, he likely would’ve been laughed out of the profession. That’s because in real life, people don’t say difficult things with the assertiveness afforded to writers of fictional characters.

So what do we do when we need a character to confront or convey a difficult truth to another without sounding like bad action movie dialogue? To borrow a familiar metaphor, we burn the forest and talk about the trees.

That is, we forget trying to say what needs to be said outright and instead discuss something figuratively related to what we’re trying to say.

In other words, we use SUBTEXT.

Let’s take a look at a scene where one character needs to find out if his mother still loves him despite his most recent crime. In the first example, we’ll be as direct as possible.

A screenplay scene without subtext

The engine idles. Mama sits in the driver’s seat. Her son, nervous, fiddles with his seat belt.

Mama, I’ve committed a crime and I know it was the wrong thing to do. I’m about to go in there and confess. I need to know if you still love me.

Son, you burned down the Christmas tree farm two months before December. No one was hurt. I still love you. Now go inside.

He unbuckles the seat belt and exits the vehicle.

On a logical level, this scene functions just fine. The Son asks Mama what he needs to know and she answers him.

But on nearly any other level, this scene reads awkward, stiff, and completely contrived. Instead of this robotic, matter-of-fact interaction, let’s have another go at the scene, this time having them trying to say what they both need to say, but coming at it more realistically, more obliquely. That is, employing subtext.

The same screenplay scene with subtext

The engine idles. Mama sits in the driver’s seat. Her son, nervous, fiddles with his seat belt.

Do you remember when you used to drop me off at school when I was little and I couldn’t get the seatbelt off because it was stuck and you’d have to help me?

You ain’t little no more, son. I can’t fix this.

I used to think if you couldn’t fix it for me, then I’d get to skip school and just stay in the car all day. I thought you might bring me office supplies to keep me busy while you worked, and then we’d go have burgers for lunch like we did that one day when everybody brought their daughters to work and you brought me because I’m the only kid you got. I was worried we’d get in trouble but you told me that you loved me and that’s all that mattered. Mama, what would you do if I said this seatbelt is stuck?

Get in there and accept responsibility for what you’ve done.

He unbuckles the seat belt and exits the vehicle.

Well, that was emotional. I’m not crying. Are you crying? I’m totally not. I just need a moment to get the seatbelt out of my eyes, okay?

The first thing we can notice about the example scene with subtext is that there’s more dialogue and it’s a longer scene because of it. Normally in screenwriting, we try to be as efficient as possible so converting boring, straightforward conversations to exciting, spicy conversations with subtext might seem to run counter to those instincts.

However, when you consider a spicy, interesting conversation to be the standard for all of your dialogue, subtext becomes a focusing agent, not a source of page inflation.

By that we mean subtext will help pare down a screenplay’s unnecessary dialogue simply by requiring more investment of resources (page length, audience attention span, performer skill, etc.) that makes otherwise breezy scenes justify their inclusion in the script.

The second thing to notice about the above examples is how much more narrative work the scene with subtext does versus the one without.

While running longer than the first scene, the second scene allows the script to draw out thematic elements and motifs. It creates connections between the characters that exist not only for the characters but also for the audience.

It’s possible to call them Mama and Son in the script’s action description in order to establish the relationship but it’s a stronger script that shows the audience the meaning and depth of the relationship rather than relying on baseline assumptions. In subtext, we have a name.

Finally, to implement subtext in your own screenplay, look for opportunities where characters are faced with a difficult conversation.

Put yourself in their heads for a minute and think about not only how they see the world but how they might try to communicate to people in it.

Some situations are more difficult than others. Ordering a pizza probably doesn’t require subtext. But when it comes to terrible truths, guilty confessions, unrequited romance, or any number of sticky situations your characters might be in, the effective use of subtext will provide a path forward for the conversation.

Now unbuckle your seatbelt and let your screenplay’s subtext shine.

1 thought on “How to write screenplay subtext”