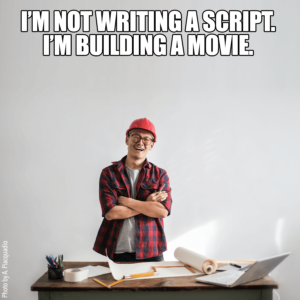 We’re screenwriters. We’re supposed go into our own heads, deep. We’re supposed to inhabit the shoes of every last character in our screenplay, reach down into the subconscious, and yank out an exploding, fizzy, nuclear bouquet of emotion and revelation that moves, shakes, or destroys an audience to their core.

So it’s not always easy, and doesn’t always feel good, to zoom way the hell back out of your own head and story and peer upon your masterpiece in its true, horrific, Cthuluesque form, which is, quite simply:

A blueprint for making a motion picture.

Yet it’s vital to your success as an artist, as a writer – as a screenwriter – that you have that very ability.

If you’re not born with the ability, you can learn it. It begins with the development of empathy.

But not empathy with your story, nor with your characters, nor with your audience. No, those are all flavors of empathy, and skills unto themselves, which you can achieve via many various paths available in screenwriting books, courses, and cheeseball seminar videos with self-appointed script gurus.

No, I’m talking about the only empathy that matters on nearly all smaller films, and many big-budget ones:

The empathy of a line producer and/or a 1st Assistant Director.

Yes, they’re the notorious “hardasses” on every film. The keepers of the time, and the money. The barkers of orders. The guillotiners of weak directors. The lighters-on-fire of all who oppose them and their mission to get the film in the can, on time, and on budget.

But they’re also the ones you might want to think about the most when sitting down to do one last pass of your script before turning it in or submitting it anywhere.

And here’s how you can improve your script, in a few tangible and intangible ways, via the simple act of trying to please those people.

As a writer, think in screenplay pages and eighths of pages

Whenever a UPM or a 1st AD is handed your screenplay, the first thing they do is to “line it” and to “break it down.”

Lining a script is the process of sorting your script’s scenes into actual, manageable blocks. The UPM or AD takes a ruler and marker to your script and draws horizontal lines across the page to demarcate where she interprets your scenes begin and end.

Most of the time, those demarcations, those lines, they end up being exactly above the scene heading you wrote, and right after.

But often, the UPM or AD will draw those lines much more narrowly within your scene, breaking what you considered to be a single scene into a series of subscenes or shots or setups.

So, sure, the first scene in your script might be scene 1, but the UPM or AD might break it down into 1A, 1B, 1C, etc., and then schedule the order of when those scenes are shot in completely non-sequential way which makes more financial sense, or is more efficient.

When they line the script, and create and arbitrarily number these scenes and subscenes and shots, they assign a page count to them.

And that page count’s basis of numbering is anywhere between 1/8 of a page and 1 page.

So if scene 1 is a scene that starts on page one, and ends on the middle of page 3, assuming the AD hasn’t broken it down into various other subscenes or shots, would be referred to a 2 and 1/2 page scene.

Larry gets out of the car, walks to the trunk.

…would most likely be a mere 1/8 page scene.

(Keep in mind that the UPM and AD will usually sit down with the director and go over each line of the script before they line it, in order to sync up with what the director has planned visually. A scene like Larry getting out of his car and walking to the trunk might be a single easy setup, or the director could want 50 feet of track set up and a series of speed ramping shots to cover the action. In which case the scene which is a mere 1/8 of a page on paper could end up being a half-day shoot, or even longer.)

“What do eighths of pages have to do with what I write?” Overall, UPMs and ADs like clear, brief, efficient action/description text because that’s the kind of text that typically adheres most cleanly and accurately to the eighths metric.

If you’ve written an entire 5-line paragraph to describe Larry getting out of his car and walking to his trunk, your AD or UPM is going to have a bit more trouble deciphering, without directorial help, what exactly the action is and how many “eighths” that action boils down to.

In brief: if you can think like an AD or a UPM who’s lining your pages into eighths, you’ll likely write more clear, more efficient, more visual scenes, and with far less fluff.

In other words, there is no “SUNSET” or “SUNRISE” or “TWILIGHT” colored strips on an AD’s stripboard (the physical or computer-based non-linear series of horizontal or vertical strips which AD’s have traditionally used to order the shooting order of scenes on a production.) There’s only DAY or NIGHT strips.

So when your script includes a EXT. WAREHOUSE – SUNSET, the AD has to confer with the director and find out if she wants the scene to be shot at sunset, as the script specifies, or if it’s okay to shoot at some other time.

By and large, ADs and UPMs will stick to the letter of the script, barring directorial input, and assume that if the script reads EXT. WAREHOUSE – SUNSET that the scene needs to look like it was shot at sunset, and therefore schedule the scene for either actual sunset, or dawn (if the scene is brief enough, and the light of the rising sun wouldn’t ruin the illusion.)

But if the production is tight on time and money, nuances like SUNSET and DAWN are the first things on an AD’s chopping block.

Magic hour scenes are beautiful, don’t get me wrong. But if you know you’re writing for a smaller budget and a shorter schedule, keep your scene headings either DAY or NIGHT and you can’t go wrong with your UPM or AD.

When you write, try to merge your shooting locations

Even on large-budget films, throwing money at location after location, when you’re not really using those locations for anything important thematically or visually, should be looked upon with heavy-browed, mustachioed Wilfred Brimley-style consternation.

There’s nothing wrong with a production “cheating” three or four locations in one physical space. We did it all the time when I worked for Roger Corman in the late 1990’s.  It’s a great way to get things done fast and cheap.

I’d even argue there’s an art to necessity. The two aforementioned films’ limited budgets forced them into limited locations, but neither film suffers as a result, and I’d argue that the films are made better because of it.

Yet many screenwriters, especially those writing very “talky” movies – characters yakking or bantering page after page – often seem to feel the urge to change up the locale of the banter, arbitrarily, say, from a fast food restaurant to a moving car. Almost as if the change of location will provide momentum or freshness the scenes themselves lack.

If you’ve got a talky film with three main characters and a lot of the action and dialogue takes places in these three characters’ homes, and those homes are indistinguishable from each other within the script – say, for example, they’re all suburban homes in the same section of Burbank – then your UPM is likely going to want to shoot all those in as few locations as possible.

Every time you change locations, it’s an ordeal for a film crew, and it costs money. Everything needs to broken down and re-set up, power needs to be reconnected, permits need to be acquired, streets blocked off perhaps, etc.

But will merging all of those locations into one real shooting locations end up in a less visually interesting movie?  Probably. It depends on the skill of the crew and the locations of course.

But a more important question we screenwriters need to ask ourselves is:

Is there a better, perhaps more entertaining, or more emotional, or more visually interesting way I could’ve written those locations?

Sometimes there’s not. In fact, most of the time on smaller films, there’s definitely not. But resist the urge to change up your script’s locations arbitrarily. The momentum of your story needs to come from the plot and the characters and the conflict first, and location a distant second, if at all, but for UPM’s and AD’s, plot, conflict, character – all of that is secondary to their primary mission: getting the film shot and finished. And on budget.

Write your script with budget in mind generally

All this in mind, let me emphasize: don’t stifle your creative process in the name of saving a few bucks on the production end. After all, getting the film shot isn’t typically your job as the screenwriter.

Keep writing great scenes, but write them as if you’re drawing up a blueprint for a house you were building for yourself. You’d want the best material possible, but you’d also like to make sure you’re not adding eleven bathrooms when all you need are two.

Write what you feel is necessary for the maximum emotional audience impact and/or entertainment. But thinking like a UPM when setting your scenes will most likely lead to your scenes being easier and cheaper to shoot.

But more importantly, I’ve found that if I can write a screenplay with a bit of a mind towards budget, and without that “just write whatever you can imagine and let them figure out a budget later” mentality that seems to be the prevalent mindset, those budget limitations I put upon myself, even in a small way, actually result in more creative thinking. More dynamic scenes. More focus on the emotional or thematic core of my story.