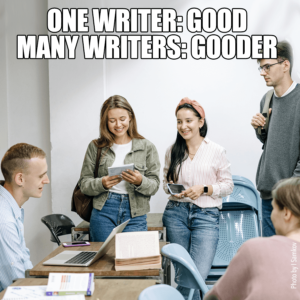 I’m a huge fan of writers groups. Screenwriting, like all writing, is mostly a very lonely endeavor.  One woman.  One word processor.  Or two, if you’re collaborating.  But ironically, the end goal of all screenwriting has traditionally been a stack of pages that get turned into a film that’s projected in front of a room of 500 people.

We watch films with people.  When we talk about films, we talk with people.  The isolated screenwriter banging away in a darkened room by herself – like the film’s eventual editor, and composer, and many other solitary tasks that film will need completed – is in many ways a disconnect from the “audience” or “group participation” spirit which lies at the core of filmed entertainment.

Sure, many screenwriters love to work with other people, or at least surrounded by humans, like at Starbucks (which I caution against in my article here), but for the most part, we screenwriters are a solitary bunch.

That is, until we get out of our own head and join a screenwriter’s group.

Con: the script notes you get may vary wildly

Any decently sized writers group (at least 10 people or so) is going to have a panoply of ideas about your script, and those ideas might not all jive, yo.

One groupmate might tell you she doesn’t care enough about your hero.  Another might say he cares, but needs to understand where he came from, and recommend more backstory. Or hoverboards. Or Willem Dafoe cardboard standies.

So how do you know which script notes are right?

That’s right. It’s you, Tootie, that has to choose.  Or, if you look at it the way I look at it, it’s you who gets to choose.

Writers groups may have 30-year veteran screenwriters, and they may have people who’ve never even read a script previously, and of course, everything in between.

That lopsided skill level factor can often wreak havoc with a screenwriter absorbing the notes from her groupmates.  The seasoned, salty writers may have sold a script or two, but haven’t worked in 15 years.  The newbies might have mind-exploding, killer ideas on how to fix your script.  So parsing who to listen to more, and who you can tune out, can be a bit of a challenge. Or it could be mind-meltingly annoying. Or, of course, it could be easy.

Con: Too many writers could lead to groupthink

When in any group script notes situation, whether you’re in a writers group, ordering a multi-reader script coverage from a script reading company, or at a development lunch with the producers of one of your films in pre-production, you’re in constant danger of groupthink.

I’d caution you to be on the lookout for over-focus-grouped, committee thinking that ruins your script, but most screenwriters, being those solitary creatures they are (amongst many other screenwriter species which I mention in my blog post here),  are pretty much born with the “stay away from my script, you damn committee!” mentality, so there’s no need to paint that particular fence again.

But what I feel many screenwriters have fallen prey to in these group script notes situations is something far more insidious.  And that is, they go along with everything. And I mean, everything.

Oy!  Please, please, please, don’t be so eager to please your producers, or your writers group, that you go along with everything they say, in the spirit of collaboration and brotherhood.  There’s being a team player, and then there’s being a pushover.  While it’s more common for screenwriters to be hard-nosed, closed-minded boners about their screenplays, the flipside can often cause just as much heartache and frustration for all involved.

Con: you sometimes have to listen to bad writers

Every screenwriters group has one:  the Big Mouth.  He got his short film into Sundance back in 2000, and had a friend who knew a guy who was married to the director of Star Trek 22: The Wrath of Lens Flare, so he feels it necessary to put his screenwriterly mansplain on your forehead whenever possible.

The instinct of the pioneer-spirited, Hemingway modeled screenwriter is to lash out at these types of poop goblins, but in a writers group situation, it’s not very productive to do so.  So you have to listen.

Most writers groups are good about policing this sort of behavior, but sometimes it’s impossible.  After all, how do you encourage a spirit of group collaboration, and call your writers group a safe haven for new ideas and open minds if you’re simultaneously barring certain personality types from the shindig?

In any case, if you do find yourself in a writers group that doesn’t seem to be aware that a big mouth is sucking up all the oxygen in the room, you might want to find another one.

Nothing beats multiple opinions on your pages, or your script. Especially if you’ve been holed up in a bunker for six months with your index cards and bloody fingers.

The opinion you get from a live interaction at a writers group, from several people in the same session, is extremely valuable, even if it’s not exactly on the mark.  I always tell my potential customers before they come and pay for script notes or script coverage to get as much free opinion on their script as possible from writers group for exactly this reason.

Live interaction with fellow writers in a room does wonders for not only your script’s potential, but for your screenwriting skills as well.

Whether you’re a shy, private type who may need a few pointers on how to be more social as a screenwriter in group/party situations, or you’re the belle of the ball in any room and in any situation, you always have something to learn from rubbing up against the thoughts of other humans in a creative environment.

The ideas are flying: good, bad, very bad, worse… But simply being in the middle of all that makes you grow as a writer and a human.

But social skills aside, in writers groups, you also tend to bond with people. Those bonds often become friendships.  And we all know how you get ahead in the film industry, right?  Repeat after me that age old truism that’s on every coin minted in Hollywood:

It’s who you know.

Holed up with bloody fingers and index cards feels good, sure, but showing your work to a group of people for the first time feels even better.

Screenwriters, generally, have a proclivity to be open to criticism.  Most of us know it’s a required trait to have.

So a group of screenwriters reading pages for the first time is, in many ways, the best possible first audience to have, because they assume you’re there in that group to hear script notes, so they’re gonna give ’em to you.  And that’s instant feedback on your script, and/or on your writing.

Giving your script to friends or family to read is a cheap way of saying “Don’t hurt me!”  But handing it over to a writers group is saying “Bring it on, bishes.  Rip me a new one.”

Wait, wasn’t this thing marked “Bad” at the top of this article?  You betcha.

Wildly varying notes might, at first blush, appear to be a bad thing.  For several reasons.  We’re hard-wired as humans to look for patterns, we like our experiments to be controlled, etc.

But the most telling reason why wildly varying notes appear to be a bad thing is that we screenwriters tend to want the easy answer.  We want to know the quick way of how to fix our script and get it done and sold.

Quick is good.  Easy is good.  But that never happens.  At least not with good scripts and good screenwriters.

Wildly varying notes provide what I believe to be the most valuable resource a screenwriter can use to improve her script because the variance of the notes forces the writer to not only figure out how she’s going to reach a wide variety of people and make the script work for as a large of an audience as possible, but she’s going to also have to pinpoint those varying script notes, and the gaps between those varying script notes, and use her own imagination and creativity to plug the gaps.

Like all good script notes, script notes from writers groups are only as good as the screenwriter receiving them.

Be that screenwriter that listens to both the stupid notes and the genius notes and is willing to chart her own way through them.  That’s how you get the most out of your writers group experience, or out of any group notes/collaboration/script development committee situation.

And that, is a fact of life.

PS Here’s a list of screenwriters groups in the Los Angeles area. Have fun!

4 thoughts on “Writers groups — the pros and cons for screenwriters”