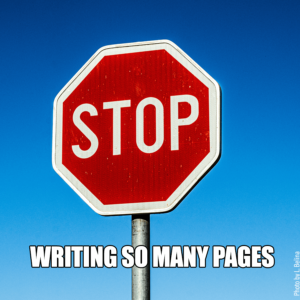 “A screenplay’s page count should be no longer than 120 pages.”

We’ve all heard it time and again about script page count, whether in film school, or just as an anecdotal whisper on the screenwriter wind. 120 pages? Maximum? Isn’t that just a bit arbitrary?  Why not 121?  Why not 119?

After all, The Godfather, (a great little sci-fi movie that you might’ve heard of) didn’t have a script page count of 120 pages. Nor did that awesome revisionist Civil War cult flick, Gone With The Wind.

As a talented, up-and-coming screenwriter with moxy, (or even without moxy) you may be asking: “Wait. Why can’t my script page count go over 120 pages? Why does page count even matter?”

As a professional script analyst and screenwriter myself, and the owner of an online script coverage company, I’m going to  try to answer that.

And the short answer is: To heck with the 120 page limit.  Just write a good movie.

The slightly longer answer is: Understand why that seemingly arbitrary rule is floating out there to begin with, and use those reasons as an edge to get your script read, over the other gal’s.

And here are 4 reasons why the 120-page screenplay limit is a good thing:

120-page scripts cause some readers to pick shorter scripts

But, aha! What if they don’t pick up the script at all, because the script page count is over 120 pages?

If your script gets on the pile at an agency or production company, there’s still no guarantee it’ll get read. So why not stack the deck in your favor as much as possible by limiting your page count, and making your script more appealing to any readers who may balk at the sight of a longer script? (And therefore maybe not take it home for their weekend read?)

Remember, amigo! Your script is just the blueprint for an actual film to be made. And films cost money.

It’s been drilled into our heads since our first screenwriting class:  One page of screenplay = generally one minute of screen time. So if your script is 120 pages, the final film that gets made will likely be right around 120 minutes.

And, compared to a 90-minute film, a two-hour film:

(a) takes longer to prep, shoot, and finish

(b) takes more more to prep, shoot, and finish

(c) takes up more of a theater chain’s schedule.

And so on and so on.

Keep in mind: there are more companies making films now than ever before. That means it’s not just the big studios anymore.  It’s the smaller guys as well. Not everybody’s looking to throw millions of dollars at a project.

So if you can keep your script tight, and beat that silly 120-page rule by getting your script down to 100 or 90 pages, your script will likely be more appealing to those smaller, less-funded script buyers.

Limiting your screenplay to a specific page limit is also a great way to prove that you know your stuff, market-wise, and genre-wise.

For example:  Comedies like to be right around 90 pages max. Horror, generally 90-100 max.

So if you write a 120-page horror script, you’re going to have a tough time convincing people you know your genre.

But if you turn in a script page count that’s on the mark for your genre, you’ve now given them one less reason to say NO.

Well, it’s true.  (And if this blog were just a few sentences, I could prove to you how great of a writer I am. But alas, it’s not, and therefore, I’m not.)

People who know scripts – agents, producers, talent, directors, whoever they are – know that less is more.  They know that a good screenwriter will keep the eyeballs flowing down the page, utilizing fewer words, but at the same time, maximizing the emotional firepower.

Brevity is the soul of wit, somebody said. Well, it counts double in screenwriting.

Bottom line: if you can just get out of your head how stupid it is to set arbitrary limits on script page count, (and that limit is, admittedly, somewhat stupid), and just accept that the big bulk of humanity that comprises the film industry has their reasons, you can really help your chances of getting read and sold.