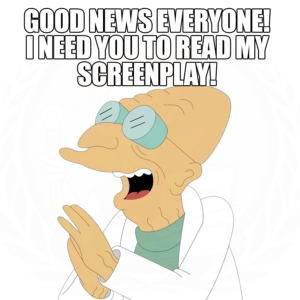 Commonly, when screenwriters need notes, they ask their peers, their fellow writers, or their writers groups. But what about writers who don’t have a lot of access to any of those resources? That’s where paid script coverage services come in.

Forking over your hard-earned cash to a script reader or a script coverage company doesn’t come easy to many folks, and I don’t blame them, because there are a lot of know-nothing script services out there that have been known to work with readers who, well, let’s be generous and say, “are somewhat inexperienced.”

But if you work with one of the good guys (and if you’ll pardon me lumping my own company, Screenplay Readers, into that mix), you’ll find there are many benefits. But there are drawbacks too.

Pro: Paying for script coverage services gets you out of the “vacuum” of writing alone

Many screenwriters write in a vacuum. That is, they have nobody giving them feedback or insight on their screenplays or teleplays.

Or, if they’re not part of a writers group, or a community of like-minded peers isn’t readily available in their town, or if they find the notes they’re getting from online forums and the like somewhat lacking, then they’re probably depending on whatever feedback they can from non-writerly friends and family, who may know precious little about screenplay mechanics, or the art of screenwriting, or the screenwriting market.

Paid screenplay coverage, if done right, can yank you almost immediately out of your “vacuum” and sit you face-to-face with feedback on your screenplay. Again, if you’re part of a writers’ group or similar, you’re already out of that vacuum, (if you’ve found a decent screenwriters group).  But for those who can’t seem to find a good group, or are socially averse to joining groups to begin with (especially if you’re an introverted screenwriter), the screenplay coverage service is a great tool to keep handy.

This alone makes script coverage worth it. I can’t tell you how many times I’ve sent out screenplays that are missing an entire paragraph, or have “their” and “there” mixed up in one sentence because I didn’t pay close attention to the spellcheck.

Yet many veteran screenwriters still send out scripts that have glaring punctuation, grammar, and spelling errors, and while typos aren’t necessarily a dealbreaker when it comes to agents or producers liking a screenplay, I doubt if being known as a sloppy screenwriter is helping anyone’s career.

That goes the same for script formatting. While what’s most important in any screenplay’s presentation is that a reader is able to understand and visualize the underlying film, many studios and film professionals, if not most, find it completely unprofessional to send out a script which isn’t formatted correctly. That is, in what passes as something as standard screenplay format.

If you’re a first time screenwriter, getting script coverage can be a much-needed cold splash of water in the face to make sure you’re making your script look as professional and as error-free as possible.

Pro: Script coverage services show you how an anonymous reader would react

So you’re finally ready to send out your gross-out comedy script to agencies and producers. Awesome! Let’s say you’ve sent out 20 of them to various places across Hollywood. Now let’s say only one of your scripts gets opened and placed on some assistant’s desk. (And 1 out of 20 ain’t a bad success rate!) But uh-oh, the assistant whose desk your script landed on isn’t into gross-out comedies.

Submitting to agencies and producers, you have no idea who’s throwing your script away and who’s reading it, let alone what kind of scripts your reader prefers.

But let’s say you did know that your gross-out comedy was sent to 20 agencies, and knew that of those 20, 19 of them were thrown in the trash, and then also knew that one of those agencies actually opened it.

So that means your script has to be ready for anything, including the reader who may not have a predilection for your script’s genre.

When you get your script covered before you send it out, you see how an anonymous reader would react to your script. Pass? Consider? Recommend?

Maybe they like your genre, maybe they don’t. The true value in the script coverage is the insight you get from having your script get covered in as close-to-real-world circumstances as possible, which includes not necessarily being paired up with a reader who is predisposed to your particular writing style, or your particular script’s genre.

As a screenwriter, I find it massively helpful to read the synopses of my scripts, as written from total strangers. I discover that entire story beats can be completely missed, entire sections of the script don’t make sense to the reader because they missed a certain part, or glossed over it too fast.

I use these opportunities to go back and double- and triple-ensure that the next draft of the script is super clear on these specific weak spots. It’s not the reader’s job to make the script make sense. It’s the screenwriter’s. And if you can use their synopsis of your script as a way to strengthen your script, you’ve already gotten your money’s worth from your  coverage.

Pro: Script coverage services can help gauge how your spec script sizes up to others

Script readers who do script coverage on a regular basis read tons of scripts. Tons. And they see tons of movies. They generally have a vast background in all things cinema, and share a massive passion for the movies. So they can tell you where your film falls, relative to other films who may be similar. And that can be a valuable tool to make sure that your script isn’t unwittingly copying or lifting another film’s story, characters, or elements.

Script coverage catches unoriginality before you get egg on your face by sending it to an agent. A good screenwriter would love to have the ability to make a tweak or two to her script if she found out she’d unwittingly written a story beat that apparently plagiarized another film. We’re all human and this is bound to happen, but by getting your script covered before you send it out, you stand a chance of catching these unintentional gaffes.

Script coverage services range from cheapie $30 script coverage to full-blown insane $500 coverage and notes, or even higher for consultations with name talent. Not every aspiring tv writer or screenwriter can afford it.

Con: Most companies work with inexperienced interns and mystery readers

If you’re not working with a reputable company, you’ll know it quite easily, because reputable script coverage companies let you know who’s reading your script. My company, Screenplay Readers, is one of them. (You can check out the bios and pics of all our readers here.)

But frankly, us listing our readers identities and bios (touting them actually, because we’re proud of them), is actually a rare thing in our industry. That is, for some reason, most script coverage companies hide the identities of not only their readers. And not only that, but of their owner(s) as well.

The reason they’re hiding?  Usually because these companies are having college interns or other free laborers read your screenplay, and they can’t exactly tell you that, because you wouldn’t buy from them to begin with, right?

Sadly, most script coverage services can take 10 days to a month or longer to get your coverage back to you.  If you’re in a hurry to get that next draft turned in, you might not have the time to spare.(Not to keep tooting our own horn, but at my company, we get ours back to you within 72 hours or so).

So are script coverage services worth it? It depends on what you want.