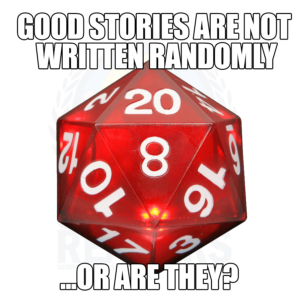 Screenwriting and Dungeons and Dragons (D&D). What possibly could a roleplaying game have in common with the century-old art and craft of writing a screenplay for film or television? What on Middle Earth could these two worlds have in common?

Believe it or not, there’s actually a Hobbit-ton (pun intended) of overlap between the kind of techniques one uses to construct a roleplaying campaign and those one uses to craft a feature or television screenplay.

What is D&D and what does it have to do with screenwriting?

A roleplaying game usually consists of a book of rules, some funny-looking dice, 2 or more “players” who take on a “role” or “character,” and a “Game Master (GM)” or, for D&D or games set in a similar medieval/fantasy milieu, a “Dungeon Master (DM)” who guides the players/characters along a story of adventure.

For example, the player-characters (PC’s) in a typical D&D game might be a human wizard, a dwarf warrior, and an elven thief. Each of those characters have a specific set of skills, determined by a combination of dice rolling and customization by the players themselves, and written on a sheet of paper they keep in front of them. (Skills might include bows, swords, picking locks, etc.)

The DM’s job is to take those PC’s along a grand adventure, weaving a story as she goes, but also making sure that the characters get to test those numerical skills at each critical moment. For example, the DM might say “Okay, you three are in a dimly lit corridor that branches to the left and to the right. You smell rotting flesh from the right. What do you want to do?”  The players talk amongst themselves, sometimes “roleplaying” their characters (if you’re in a good bunch of folks) and respond to the DM “We’ll go right.”

The DM then might say “As you turn right, a group of 10 humanoid rat creatures charge out of the shadows with rusty shortswords,” and then a series of skill checks ensues, pitting the character’s choices against rolls of the dice.  The warrior might say “I swing my sword at the first creature,” and the DM would ask him to roll some dice. Depending on the resulting number, the DM determines success or failure of that sword swing, and, of course, the delicious narrative results.

I think you get the idea.

But another way to explain a pen-and-paper roleplaying game to a neophyte is simply to describe it as an exercise in storytelling.

And this is an apt comparison because when you’re leading a group of your friends along the adventure of their lives, you’re creating a story together. Believe it or not (but seriously, believe it) there’s actually a dragon’s horde of overlap between the kind of techniques you use to construct a roleplaying campaign and a feature or television screenplay.

So grab your dice and dust off the arcane computer because we’re about to write a critical hit. (That’s a roleplaying game (RPG) term for a really good roll of the dice.)

Like a screenwriter writing a script, when putting a roleplaying campaign together, a DM has to make numerous decisions about how and where to put challenges for the players to overcome.

Like growing up in real life, challenges the players face usually don’t start off overwhelming and gradually get weaker. Now, they start off small and grow into enormous feats to be overcome only through tremendous struggle (and lucky rolls of the dice). This same pattern of progression can, and should, be applied to writing almost any movie.

What’s fundamental about D&D and most other RPG’s is that characters in those games level up. That is, as they proceed through the story that the DM has laid out for them, they get better and better at what they do. (That is, those numbers on their character skill sheets improve, making it easier for the characters to take on lower-level challenges and monsters.)

The trick, however, is to keep introducing higher and higher-level challenges as the characters progress.

Key to the narrative of any screenplay is an ordering of events such that the audience always feels like there’s something bigger about to happen. Compelling viewers to stay in their seats (or keep the Netflix stream rolling) is of vital importance to a project’s success.

So during the screenplay writing process, it can be quite handy to think of the characters in your movie as actual human players in a roleplaying game. Put yourself into the shoes of a DM at that moment and ask yourself: “At what point in this screenplay might my players get bored with this challenge?”

Getting bored means the player is probably thinking “Well, the DM hasn’t presented that big of a challenge, because I know I’m gonna get my character through this no matter what happens.”

If the players in the game get bored, they complain, they check their phones, they turn on the tv, or they get up from the gaming table and leave your house.

And if the audience in a film thinks “Well, the screenwriter hasn’t presented that big of a challenge, because I know the character on screen is gonna get through this no matter what happens,” that’s bad. Because audiences walk out of theaters just like players walk out of D&D games.

Playing D&D allows you that first-hand experience with ramping up difficulty for characters.  First-hand meaning: your audience is 3 feet away from you, at the table with you, so you can see right away how they react to the problem you’ve put in front of them.

A screenwriter revising the plot so that each scene remains relevant and important to the characters is not unlike a Dungeon Master making sure the players in the game have good reasons to be paying attention. Keep their butts in their seats and they’ll think you’re a real wizard.

Most D&D campaigns start with an event or a meeting that sets the players on the path to glory. And, as is the case with many D&D players, they don’t always want to take the path that the DM lays out for them.

But a good Dungeon Master (read: screenwriter) can riff on the fly and come up with an alternative story as they go.

However, a great Dungeon Master (read: great screenwriter), can make sure that their starting events are crafted so that the players have no choice but to follow the intended campaign.

Any good screenplay has to capture that magic as well.

Making the narrative feel inevitable, no matter what the characters choose to do. It has to bear down on them, force their hand, lead them down a path that they can’t come back from.

Writing a screenplay is often a compromise between plausibility and plot. The characters have to make choices the audience can at least understand or empathize with, or else the script risks the audience not finding the story believable.

(Note, when we talk about believability here, we’re talking about whether the audience finds the characters’ actions authentic to that character and not the genre. For example, in The Sixth Sense, we all know that ghosts aren’t real, but that’s okay because the character’s actions are, for the most part.)

Going back to the D&D players who may want to take a diversion from the DM’s carefully-planned quest point:

Yes, herding cats is a challenge. But herding human players who have been drinking wine and eating cheese (my D&D nights are classy) — that can seem downright impossible. Luckily, there’s a trick to it and it also applies to screenwriting.

That trick is: put yourself in your players’ shoes. When you do, you can start to guess the various other directions they might choose to go when presented with your roleplaying campaign’s starting event. Or any event in your narrative, really.

Once identified, come up with reasons why those avenues are blocked. For example, if they arrive by boat and you don’t want them trying to mutiny, mention that the ship’s crew is fearsome pirates and the water is shark-infested.

The same technique can apply to the characters in your screenplay. Get inside their heads and figure out alternative options they might take and write in reasons why it’s not possible. Lead the elephant down the hallway. (Elephants are too big to turn around in a hallway, so they have only one direction to walk in, once they’re down that hallway.) Be creative and resourceful, like you might be if you were breaking out of a dungeon. Or saving a village from orcs or a gaggle of undead rakshasas.

While roleplaying games like D&D rely on agreed-upon rules to determine the consequences of actions and sometimes the life and death of characters, there’s not the same responsibility to adhere to those rules as there are for other games (“Free Parking” in Monopoly, I’m looking at you).

A screenplay shares a similar lack of responsibility.

Yes, a screenplay does have a certain set of formatting rules and there is a slew of unspoken expectations of the document. But beyond that, there’s no one else in charge. No judgment, no criticism, nothing between you the creator and your work. Eventually, that work will have to be shown to others and then, boy howdy, in comes the criticism, but until it’s unveiled, like being the DM of a roleplaying campaign, what happens next is completely up to you.

Dungeon Masters, at times, can go off-book to create a unique, original part of their campaign. In the same way, a screenwriter can ignore what’s worked before and strive for something new. I’m not saying it always works out, but every now and then a movie comes out with an element we haven’t seen before. That chance to explore isn’t available to most hobbies or professions, but roleplaying games and screenwriting are equally capable of showing us a whole new world.  And that brings me to my final point:

RPG’s are basically idea-creation engines. Think about it:  3-10 people — 3-10 brains — all sitting around the same table, all focused on one story. The epic narrative points, the scenarios as they’re playing out beat-by-beat, the infinite array of character minutiae — all of these are screenwriting / storytelling gold.

Writing a movie about a secret agent trying to escape Soviet Russia through some tunnels, but coming up short when it comes to ideas on how he can do it with flair or originality?  Add a tunnel escape to your Tuesday night D&D campaign and see what the “writers room” of your 5 player characters come up with as they work together to solve the problem so that their characters can stay alive.   Or, see what you come up with as a result of watching them squirm as the walls close in on them. The brainstorming possibilities are almost endless when you’ve got several brains in a room. When you’ve got humans who are coming up with ideas because want to keep their characters alive in the D&D game, that brainstorming is infinitely more fun and more fruitful.

So check out D&D, or any other roleplaying game, if you could use a boost to your storytelling and your screenwriting. The worst that can happen is you roll a 01, and then all bets are off.

Don’t know where to begin? Start in Colville, Population: Awesome

Screenplay Readers heartily recommends checking out Matt Colville’s channel on YouTube. Colville is a writer for a videogame company and a whip-smart and entertaining D&D/gaming blogger and RPG expert. His channel is replete with a variety of fun and easy-to-grasp videos that help newbies not only get into D&D, but to remember what’s most important and fun about roleplaying — character, story, and keeping your fellow humans laughing, crying, and on the edges of their seats.