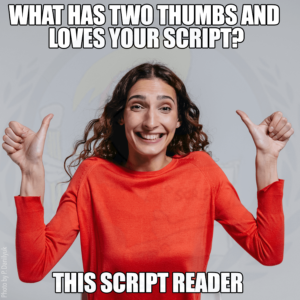 Sure, we all know experienced producers, agents, and name talent use screenplay coverage to separate good screenplays from bad ones. But did you know they also use it as a mechanism to keep their eye open for good screenwriters?

The RECOMMEND, CONSIDER, or PASS on a script coverage is typically the one “big final score” or measure of the script’s ultimate quality, as far as its utility to any particular player, be it a producer looking for a particular brand of action film that fits his year’s budget, or an agent looking for that perfect role for her B-list TV star that she’s trying to groom into an A-lister.

But on many in-house agency and studio coverages, there’s often a second, similar criteria. And it goes a little something like this:

A script might be a PASS for what Producer Joe is looking for at that particular moment, but the WRITER might be a huge RECOMMEND if the assistant reading the script and writing the coverage finds exceptional value in the quality of the screenwriting itself.

So for the agency and studio coverage that does include a spot to recommend or not-recommend the writer of the script in question, what are the criteria? What are the things a script reader will judge the writer on, when contemplating whether or not to give her — the writer herself, separate from the screenplay — a RECOMMEND, PASS, or CONSIDER?

Your writing voice needs to be unique

The overwhelming majority of writer recommendations come from this simple criterion: whether or not the screenwriter has a “voice” that comes across as unique. Each reader is different of course, but each has their own idea of what constitutes a “unique voice,” and it usually has a lot to do with how well the screenwriter’s way of writing stands out from that of other screenwriters.

It could be how well their action flows, or how well-rendered their scenes are, or a dozen other things about the script that make the reader think they’re reading something more fresh than usual. But in many instances, it’s simply the way the writer renders her characters’ dialogue. It seems a bit of an oversimplification, but it’s true: fresh dialogue is by far the easiest thing to spot in a screenplay, simply because dialogue usually comprises the biggest percentage of what the screenplay is made of.

But heads up: many script readers, and indeed many execs, producers, and even talent, have been fooled into championing certain screenwriters and screenplays simply because the dialogue sounds a bit different, even if the rest of the screenplay’s components don’t add up well, or are sorely lacking. That is to say, it’s quite easy to fool the reader of a screenplay that you have a unique voice, simply by focusing on making your dialogue weird. Most experienced filmmakers and readers, however, will see through your ruse if the other components of your script are mush.

Hone your unique voice. Don’t fake it. Others have faked it and have been successful, but it’s ultimately not the way to go.

Your writing voice needs to be familiar but new

As much as everybody’s looking for a unique perspective or a new writing star, they’re five times more excited about a writer who can tell a story using a certain familiar convention of tone and style. Two old axioms come to mind:

“Give me the same, but different,” and “Hollywood is always rushing to the spot where lightning just struck.”

Couch your spark of individuality and your unique voice within the “colloquial language” of what Hollywood is looking for – what they expect. It’s harder than ever to break in, and they’re not taking as many chances anymore. Whatever you’ve got to offer has to be new, yes, but it also has to be old. Give them the fresh spin on whatever they’re looking for, but speak their language.

Keeping your script visual is vital

Script readers hate reading scripts. They prefer to watch them. Like movies. And the best screenwriters allow them to do it by keeping their scripts flowing, colorful, and visual. Cinematic. Worthy of the big screen (or the 46″ HDTV).

If you want a script reader or exec to RECOMMEND you, even if they might not recommend your particular script, keep the images flickering past their mind’s eye as they read your script, and don’t make reading your script a chore.

What are the vital details that need to be conveyed? What is the minimum amount of dialogue required to get your point across? Stick to those baselines and paint visual pictures with your words, as few words as possible, whenever possible.

Let the script reader know you can write

No reader is going to recommend a writer if they feel the writer has no idea how to write. If a screenwriter takes two paragraphs to describe what can be described in 4 words, or if she bogs her screenplay down with redundant, boring scenes, or if she can’t spell or use grammar correctly, would YOU feel confident recommending that writer?

Screenplay format is one of those big, dumb rocks that a lot of new screenwriters get hung up on. It’s been said before, but it’s worth repeating: the only format you need to really worry about is 1) Keeping it in the ballpark of what a screenplay is supposed to look like, and 2) Keeping the reader entertained and turning pages.

That being said, it takes little effort to master what a proper screenplay looks like, and the panoply of screenwriting apps make all of that so ridiculously easy now, that there really should be no reason for you to not nail the formatting part. If you do, it’s one fewer thing a script reader has to feel hesitant about when considering whether or not to recommend you as a writer.

Make your script and yourself a true discovery

Finally, if you want to increase your chances of being recommended as a writer, whether in coverage or otherwise, do everything you can to become a true, honest-to-goodness discovery. Everybody’s waiting for that person, in every field of the film industry — the gal with the new ideas and the awesome, unique, cogent voice who knows how to connect with an audience.

Ask yourself: “If I was a script reader, or an intern, or an assistant, would I go out on a limb to recommend this script (my script) and this writer (me) to my boss?”

Then ask yourself: “If I was an exec, responsible for pitching viable shows and projects to the brass, would I feel comfortable calling this script (my script) and this writer (me) to my people?”

Or would the script reader not feel that confident? Or would the exec pass on that possibility and find a script and writer that stands better chance of making her look good?

Be the discovery that no one has second thoughts about, and you’ll be the new writer that anyone can recommend, without hesitation.

1 thought on “How to Be A Screenwriter That People Recommend”