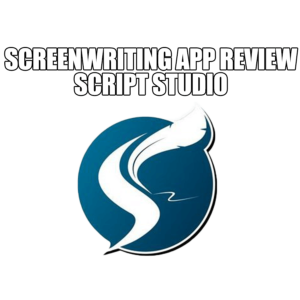 Upon first launch, it’s clear that the designers kept ease of use in mind, as the design is elegant and pro, and everything in the interface is accessible and clear, as is the navigation. One great thing that’s noticeable right away about the overall interface is its use of intuitive panels. For example, one column displays a view of all of your scenes that lets you poke around and reshuffle however you like.

And in the left panel, for example, you can select immediately between several areas:

In the Screenplay Content menu, I can fire up the handsome, easy-to-use Outliner, which allows me to set up scene headers before I even sit down to write. Adding steps is as easy as punching the + symbol and typing in a brief overview of what happens, letting you fill in the details in the next section, the Screenplay section.

The Screenplay editor section is a full-featured WYSIWYG, tab-based script editor, on par with all of the screenwriting app features you’ve come to expect. Writing is a breeze, as it should be.

And if you’re not writing a screenplay, no worries. When you open Script Studio, it gives you the opportunity to choose your project’s “flavor.” Stageplay, musical, TV show, or screenplay. So if you’re not expert in the nuances of stageplay formatting, Script Studio’s templates have you covered.

Speaking of templates, as I poked around, I noticed that Script Studio has some built-in outlines from some mainstream movies such as Good Will Hunting, Pretty Woman, and Seven. These outlines can be hugely valuable when putting together your own outline, or just when brainstorming. Having them accessible in Script Studio’s Reference Library, on the fly, is just simply great to have.

Some other great features of Script Studio include

– A very powerful set of Index Card features and views which give you a really masterful overview of your script. If you’re a screenwriter like me, you’ve turned into a glazed donut after looking at the same script in the same way over the period of months or years. Script Studio allows you a ton of different ways to visualize your story’s flow, its overview, and its individual beats.

– A neat tool called the FeelFactor, which allows you to dial in, with slide bars and colors, emotions for particular scenes. This is a great way for writers to dial in what they’re going for in each scene.

– A Name Generator, which creates names for you, using all sorts of criteria, such as meaning, heritage, gender, and even just based on initials you’d like to go for.

And so much more.

If you’re a screenwriter who’s tired of the white screen, and like to see your writing come to life in ways that can really get your juices flowing, or at the very least give you a new insight on your scenes and beats, Script Studio is for you. There’s simply no better coupling of screenwriting app and story-visualization software out there that I’ve seen. Script Studio’s price is $199 at time of this writing, but like any good company, I’m sure the creators run regular specials, if that price point is too rich for your blood, so keep an eye on their screenwriting software website over at http://scriptstudio.com and keep on writing!