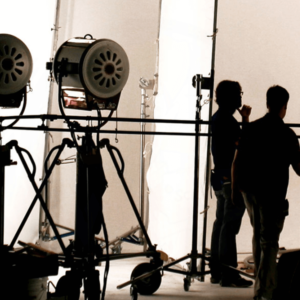 What’s that you say?  One of your screenplays is getting produced?  Excelsior!

If you’re lucky/skilled/badass enough to have one of your screenplays optioned/bought and kicked into production, and if they’ve invited you to be a part of the experience of filming it, you might want to keep in mind, matey, the fact that thar be only a few things an on-set screenwriter is expected to actually, well, do.

But… there’s a entire Magna Carta and/or long litany of things she’s expected not to do.

And while it’s often more common to have a screenwriter on set on a smaller, independent film than it is on a tentpole film, in either case,  if you’re asked to be there, it’s usually for a reason.  Those reasons?  They vary wildly.

For example, a smaller film may say they need the screenwriter there so they can get you to hold the boom mic.

Or a larger film’s director might want a screenwriter nearby because she loves her work and wants to make sure she interprets the material accurately.

Or on a mid-sized film, a larger film’s producer may be simply allowing the screenwriter to visit the set a few times in order to make the screenwriter feel more tingly/more involved, in order to offset the fact that they’re paying her peanuts for the screenplay. Being on set is a magicky mindset, and savvy filmmakers know how to use it to their advantage in making deals with green, or off-green screenwriters.

Or, God forbid, someone may actually want the writer to nearby and available for fixes, tweaks, and/or input.  (And some similar concepts along those lines:  Bigfoot, the Bermuda Triangle, and the Loch Ness Monster.)

And of course, there are those cases when the director and/or producer is the screenwriter, in which case, a lot of the set etiquette below doesn’t necessarily apply, so if that’s you, these aren’t the droids you’re looking for.  Move along… move along.

A writer on set must pay attention to the shoot

If you’re there to help as the screenwriter, make sure you’re following every line of your script and every scene and every behind-the-scenes decision as closely as possible.  The director or producer, or even cast and crew, may need your script-tastic expertise at any time.  “If we shoot this scene at night, does it mess up the thematic elements that follow?” “We just realized we need the character to be saying several lines as they cross the stairway. Can you write a few new lines real quick?”

Ultimately, the creative control is the hands of the director (usually!), but if they ask for your help, you need to know what’s going on, from moment to moment, in order to give the best creative or strategic input as possible.  For example, maybe they’re running out of daylight, and they need to tweak a scene to make their day.  If you’ve had your head up your keister all day and don’t know what’s been shot or how they shot it, you’ll have a hard time coming up with a helpful solution to their problem.  And if you’re not helpful in that department, you might as well be a PA.  With no offense to PA’s.

Part of the awesometosity of being on a film set is that a lot happens in one typical long shooting day.  On a any film production, if you miss even one single shooting day, chances are, you also miss 20 different arguments on how to get something done (15 of which may not get resolved), you miss the schedule being changed 6 times, for better or worse, you miss at least 2 huge boneheaded/genius creative decisions, and usually 1 or 2 ideas that save and/or ruin the picture that day.

Not to mention, you miss a day of cast and crew members growing closer as friends, or at least becoming part of a smarter, more efficient machine.  That bonding/knitting that takes place on nearly all films is the grease that makes all movies happen, and could be what sets you up for your next one, or gets you on the team for future projects.

A writer on set should be ready to help

The best thing a screenwriter can do if asked to be on set is to focus on the screenwriting, be available for consultation, and stay the hell out of the way.  Being a screenwriter on set means simply hovering nearby, but not over the director’s shoulder, and being ready to come up with new lines, fix a line or two that might not be working too well, or provide an opinion on the textual or thematic elements of your screenplay when asked.

If you’re asked to hang near the director in video village, or the set is laid back and everybody’s cool, go for it. But most film directors, no matter how Lebowski they are, don’t like to have a screenwriter clinging to their shoulder and commenting on everything they do.  Screenwriter set etiquette 101 dictates: be nearby, be ready, offer some pepper every now and then, but don’t hover or be a pest.

A writer on set shouldn’t be doing the small jobs, unless it’s a small film and you’d like to pitch in

Whether you’re suggesting shots to said director, hauling cable with the electrics, or running to the store to buy more cream cheese for craft service , it’s still you doing other peoples’ jobs, and in many, many cases, you simply shouldn’t be doing that.

On smaller films, sure, due to film budget restraints it’s usually all hands on deck, and everybody needs to pitch in.  But be careful.  Once you start doing tasks which aren’t related to your job as the screenwriter, you could be seen as “slacking off” when you decide to not continue doing them for any reason.  The crew may grow to expect you running the craft service table.  And then you’re not the screenwriter; you’re the crafty.

On the other hand, if the producer or an investor wants you to give her a few script notes on a spec script she’s interested in pursuing after the current film wraps, and you think it might land you a gig, by all means, full steam ahead.

A writer on set shouldn’t abuse their position

If you’ve got a problem with something that’s not being listened to by the person or persons in charge, don’t try to circumvent them or play people against each other.  If you’re seen as someone who can’t follow the chain of command, or someone who seems to be the center of every poopstorm that dusts up, you won’t be hanging around set much longer. Politics are often unavoidable, but don’t be a politician.  A good rule of thumb is: Don’t be as naive (stupid?) as Ned Stark, but don’t be as manipulative as Cersei. And if you don’t understand the reference, winter is coming for your career.

Taking pictures is fine.  Taking them nonstop, and then blogging them, or Facebooking them – that’s bad. For three main reasons.  1) It could make you look like an amateur/tourist instead of a seasoned screenwriter.  2) You’re filling the role of the on-set photographer (which is fine if you’re on a small film that needs the publicity and they’ve asked you to do it) but not getting paid for that.  3) You could get in trouble with the producers or other brass that want to keep a tight lid on their marketing, or you could get in trouble with cast and crew who may not want their pictures publicized, or may not like certain pics you take. Privacy is a big issue these days, and many salty film dogs eschew having their mugs uploaded to Facebook and tagged. Some sets/some crew are cool about it, others: not so much. If you must be an on-set shutterbug/social media regurgitator, err on the side of discretion until you get the clear vibe that it’s okay, if not the out-and-out go-ahead from the brass.

Whether you’re talking or texting or playing Angry Birds, or looking up nearby hotties on your app of the week, if your head is in your phone, your head is not on set, and definitely not in the script.

You don’t have to be a snob and not help the production, but don’t let yourself be taken advantage of either. Find the balance of offering your expertise/service, when needed, and standing back quietly.

And/or the balance of helping out with the cream cheese on one hand,  and staying closer to video village no matter what PA disaster or art department catastrophe is going down.

If, as a writer, you’ve never spent 30 days on a small film on set, you owe it to yourself to jump in and do it, at the very least one time, for an entire shoot.  All 20, 30, 60 days.  It’s a hell of a learning experience for a screenwriter, and a hell of a way to bond with people who may be integral to your career.  And/or integral to some great future friendships / creative collaborations.  (And maybe even, as some would argue, integral to finding a mate, as long hours on set under typical filmic pressure has often proven conducive to, well, amore.)

That being said, a screenwriter shouldn’t necessarily live on set, even though it can be fun and exciting to stay within the pulse of production.  Screenwriters write.  So unless you’re the most productive and creative as a writer while on a film set, you should probably keep your time spent there in balance as well.

The bottom line is: don’t let them push you around, but don’t be a total newbie knob either.  The on-set screenwriter must be the go-to-gal/The Yoda/the expert ready to help when asked. Be the script’s expert, and be valuable, whatever that means to your particular production.

Because people want to work with valuable.

5 thoughts on “Set Etiquette for Screenwriters”