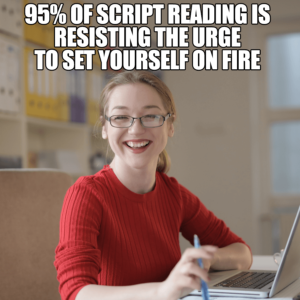 First and foremost, the great script reader must be highly adept in the language of cinema. And not only on the written page, but in all aspects of production, post-production, pre-production, and everything in between.

The screenwriter’s craft is just one pursuit in a curriculum of related pursuits that all add to the sum total of making a film.

If a potential script reader doesn’t speak the language of physical cinema, and can’t understand how to translate text on the screenplay’s page into a workable, entertaining film, that script reader will never be a success.

A Script Reader Must Have The Mind of A Mechanic

Script readers must also possess a keen mind when it comes to the nuts and bolts of the text on the script’s page.

They have to be able to see the composite parts of that screenplay, from how the entire story flows from beginning to end, to how all those parts interlock to pull the story forward, to all the tiny component blocks within those parts such as how characters speak, how action is related, even how to properly format a parenthetical or dialogue margin.

A Script Reader Must Have The Objectivity of a Scientist

When a blogger pops open his blog account and rants about the latest reboot of Spiderman, he’s allowed to totally GO OFF.

As a blogger, as a movie reviewer, he has license to completely rip that film a new one.  He can attack the writers, the director, the CG house; anything and everything is fair game, and it doesn’t matter how caustic he is.

But when a script reader reads a script, a good chunk of his credibility goes out the window as soon as that script reader deviates from being an objective analyst of that script, and leans more into being an angry, subjective movie reviewer.

Filmmaking is an art, but it’s also a science.  Don’t believe me?  Ask Industrial Light and Magic.

Or ask the head of any major studio why they’re putting more and more money into proven film franchises, instead of taking chances with new formulas and new filmmakers.

A script reader simply can’t be a movie blogger.  She has to be a credible, thoughtful, objective observer and critic.  And the more objectively she can frame her subjective viewpoint of the script she’s reading, the more credible her critique will be.

A Script Reader Must Have The Pen of An English Professor

And by “English” I mean whatever language you happen to be reading scripts in.

This trait consists of the ability to be able to phrase your thoughts on paper while being as free from errors of punctuation, grammar, spelling, and usage, as possible.

If you’re not a complete master of the language, you will not be a successful script reader.  Or it’ll at least be a very difficult row to hoe.

Many keen minds are free of the restraints of proper grammar and spelling, but without the mastery of the written and spoken forms of language, you’re facing an uphill battle if you’re trying to be a credible script reader.

…and a Script Reader Must Have The Patience of A Monk

I used to throw scripts I didn’t like — jJust chuck ’em across the room.

“What the hell!?” I’d scream, hitting some awful story point by page three, or finally becoming overwhelmed with the sheer thickness of the screenwriter.

Because I’ve reached a monk-like state of zen, for lack of a better phrase.

Once you can see that the spec script universe consists mostly of terrible, terrible screenplays, you attain a sort of peaceful tranquility.  Oddly enough.

Acceptance that 95% of the scripts out there are bad may seem like a defeat, especially for those of us who want to see cinema restored as a credible art form, but this acceptance is far more of a victory.

Because it gives the script reader an incomparable sense of inner peace.

And that inner peace only leads to higher understanding.  That is, by chilling out about how much most scripts suck, it frees you up to be more of a script expert, and come off less like a ranting, angry Howard Beale type.

Put down your anger, pick up your thinking cap.  That’s the best way to be a successful script reader.