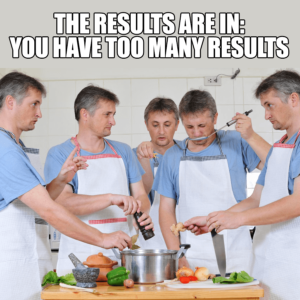 Screenplay feedback is nice. But at what point does a screenwriter stop writing her script and start pitching it?

That is, how is the screenwriter supposed to know when the script is finally, truly ready? When is that script, at long last, a final draft she can be proud of and send out to screenplay contests, or production houses, or to agencies and managers?

I’ve had many a script torn apart by peers, who have helped me make it much better.  And, I’ve had a lot of bonehead notes.

But at some point, the screenplay feedback must cease, and the execution (aka the rewriting of the screenplay) must commence.  Here’s when to draw the line:

Writers groups and fellow writers are great at giving notes. Usually. Depending on the skill level of the person you’re asking to read your script, you could either end up with two paragraphs of slop, or ten pages of detailed, insightful script notes.

But remember: even when you get a bunch of awesome notes from someone you trust, not all script notes are created equal.

The trick is to gather up all the notes at once, as best as you can, and set up a specific action plan for the next draft. Going into a rewrite of a script without knowing specifically what you’re going to change can cause you to lose a lot of time and spend a lot of energy.

If you’re not able to put together a specific action plan for the rewrite, you probably don’t have enough worthy script notes yet, and therefore probably need a bit more feedback.

If you’re swamped with notes, and still have no specific plan for the rewrite, you may not have received the best notes possible, or, you may think you have great notes, when in actuality, they’re probably more ambient or unhelpful than you think.

Paying a company like mine for screenplay feedback is an entirely different ballgame, in that you usually don’t have a relationship with the person who’s reading and critiquing your screenplay. But the mechanics are pretty much the same: if you don’t have enough specific, actionable notes to put together a specific plan for the rewrite, then you probably haven’t gotten enough feedback from the paid script coverage company either.

But here’s the rub:

At Screenplay Readers, we see a ton of repeat business from our cadre of screenwriter friends and allies, but sometimes we have to refuse to provide any more script coverage on a certain script.

“Wait,” you say. “Doesn’t it seem counterintuitive for a script coverage company to discourage screenplay feedback?”

Yes. It’s absolutely counterintuitive for us to turn away a client and their money, but in certain situations, it’s far better for both our script business and the screenwriter if we can put the brakes on coverage for a bit. Here’s why:

Some screenwriters are able to put together that specific action plan for their rewrite based on our coverage or notes, and then immediately incorporate those notes, but some then turn around and send the script back in for more coverage.

While that’s great for business, it’s not really great for the script, nor the screenwriter.  We call it “chasing notes.” (And here’s a great article that very subject.)

First of all, we’ve never heard of a script being made perfect by script coverage. We have heard plenty of examples from plenty of writers where script coverage has definitely improved their scripts, many times quite markedly, but no script has ever crossed our desk at Screenplay Readers where we’ve been able to say “That’s a perfect script.”

So a screenwriter constantly turning their script in for more coverage is, we feel, the equivalent of a unicorn hunt. Yes, we can help improve the script, just as free feedback can help the script, but to make it perfect? It’s just not possible.

Don’t get me wrong – Screenwriters are absolutely in the right to get a second opinion on coverage , or to incorporate notes or suggestions from a script coverage into their next draft, but hunting unicorns can be very frustrating.

Especially if the screenwriter is paying us for screenplay feedback each time, and each time they get a new reader. As you can imagine, this can be hugely frustrating to a screenwriter: fixing problem A, recommended by Reader #1, then turning in a new draft for coverage, and discovering problem B, C, and D, as pointed out by Reader #2. (This happens every now and then when filmmakers order our 2-Reader Coverage or 3-Reader Coverage.) “But wait, I made the changes Reader #1 recommended. Why didn’t I get a RECOMMEND or a CONSIDER this time?” (If I had a nickel for every email I responded to like this, I’d have $11.50.)

Use free screenplay feedback and paid script coverage and every other form of feedback on your script as a sounding board. Whether you’re paying for notes or getting free notes, the reader is not right, and the reader is not wrong. It’s just a matter of opinion, and that opinion is rooted in that particular script reader’s skill set. Oh, and by the way, every person giving notes is different.

Use your common sense and compare any notes you get, using science. Look for the major patterns – aspects of your script where the majority of readers agree need the most work.  But don’t expect one reader or even twelve in a row to find everything that’s not working with your script and provide the exact specific changes needed.

Bottom line: Soak in many opinions. And look at all screenplay feedback as a road map to help you get your script on the right track; not as a vehicle that’s going to drive you there.

1 thought on “Screenplay Feedback – When too much can be unhelpful”