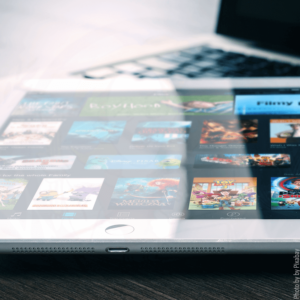 Writing for Netflix, and the Netflix / streaming era, is revealing itself to be a different sort of screenwriting.

Be kind and rewind with me. Back to the 1980s, when the videocassette rental boom proved beyond a doubt that there was a massive public appetite for all film genres and all production values.  And all sorts of bad videobox art.

And the aisles of the 1980s and 90s video rental shops did nothing less than lay the entire foundation for how we browse film and television on streaming services such as Netflix.

For writers for tv and film, for years, the paradigm has always been the same: pitch a screenplay to front of a producer and hope for a deal, betting on the possibility that the material is something the producer can find marketable. Better still:  hoping that the producer knows how to market it.

But with the advent of streaming, and the “virtual video aisle,” it’s easier than ever to be able to pitch material, or even conceive and create material, with a producer’s mindset.

Take Netflix. A barrage of films, tv, and specials, from all genres. There’s no physical aisle, of course, so how does  Netflix present all these options to their viewers? And how can writing for Netflix, or writing with the streaming service mindset, help make that happen?

Their insanely huge, insanely scrollable video menu, featuring the cover art of the film or show, which, when clicked, allows you to watch a trailer for that show, or read a synopsis, or read what other people have thought about it.

But with all that speed comes a need for films and tv to stand out more than ever from the “box covers” on either side of them.  For a viewer to stop and click on a film, it takes a lot of psychology and a lot of different ingredients, but I’ll just mention a few below.

Since the dawn of the silent era, the movie star has been the most important factor on the poster. That much hasn’t changed.

I suspect that most aspiring writers don’t make it a habit to write scripts around specific movie stars, and in fact, doing so can often keep a writer from exploring different possibilities with her story.

But what about the audience? They’re at home, scrolling through endless Netflix titles, trying to pick something to watch. When writing for Netflix, if your project could be written around a movie star, why wouldn’t you?

Maybe don’t write “HENRY (48) – A Tom Cruise type,” but keep your story and characters open to the possibility of name actors seeing themselves as a fit.

Their face on the box could help that scrolling audience member slow down, or take a second look. Is that ideal?  No, but it’s the reality of our business.

Netflixers slow down when they see sex (sorry)

Another reality of our business: sex sells. Personally, I’m not exactly comfortable contributing to the perpetuation of this fact, but it must be mentioned.

Nothing like a pretty face, or a flash of sideboob, or some hunk’s bare chest, to slow down a Netflixer’s scroll.

If you haven’t caught this article’s vibe yet, I’m arguing for the idea of the marketing of a film project informing the art / informing the writing.

I know. It’s everything we artists find reprehensible, right?

But the fact is that producers think this way. Lots of them. If you want to sell your project to them, you have to make them see, instantly, how they can sell it. If they can’t see how to sell it, they’re not buying it from you.

In a video store, you can hold the box, read the back, see the pictures. When writing for Netflix, whether it’s a show or a film, keep in mind that on Netflix and other streaming services, you’ve got a tiny little JPEG to look at. In two dimensions only.

And for most people on streaming services, those little JPEGs are very, very hard to read.

A long title in those instances becomes a detriment. If they can’t read it, they can’t know what your film’s about.

And that’s not even mentioning the title in the actual text below the image. If a title is so long that its text that appears below the artwork on the Netflix menu is clipped, your audience won’t bother clicking on it. Why should they?  There’s 10,000 other possible films to scroll through.

Smart producers know to be very careful with longer titles. Sometimes they’re good, but in most instances on streaming, they’re bad.

Writing for Netflix could mean writing a knockoff

My friend John wrote and directed a script at the behest of The Asylum (a production company) in a gun-for-hire situation. They were looking to cash in on the popularity and/or marketing campaign of the film San Andreas, starring the Rock, and distributed by New Line and Village Roadshow.  Asylum named John’s film San Andreas Quake.

John knew what he was making – a quick, cheap knockoff with the goal of making as much money for The Asylum as possible – but he had fun with it, put his own signature spin on it, and was able to, once again, show off his formidable directorial chops despite an extremely constrained schedule, concept, and budget.

The result? The film didn’t win any Academy Awards, but it did what it was supposed to do:  kick ass on streaming channels. To be accurate, Netflix wasn’t one of them, but Hulu and Amazon and nearly everywhere else has (Netflix doesn’t buy “mockbusters,” John reports.) The point remains the same: audiences on Hulu and Amazon do the same type of scrolly-scrolling as they’re trying to find something to watch.

More importantly, this little 12-day shoot with a tiny budget was able to compete with The Rock’s film in the streaming services because The Asylum decided to basically parrot the title and art of a more well-funded film.

My goal with this treatise isn’t to sap you of your precious artistic fluids. My goal is to make you aware of just one of the endless things producers are thinking about when they’re considering your project.

Netflix “box appeal” is real. “Stop-The-Scroll Appeal,” if you will, is real. And it’s more important than ever in a film and tv ecosystem ballooning with so many new titles.

Arm yourself with the knowledge. Use it to your advantage. Don’t sell out, unless you want to, but remember it’s show business.

If you can adopt this mindset when writing for Netflix – heck, when writing with any of the streaming services in mind – you’ll be able to help whomever you’re pitching visualize for themselves that your project is one that will stand out on those “virtual video shelves.”

9 thoughts on “Writing for Netflix – does your script have “scroll appeal?””