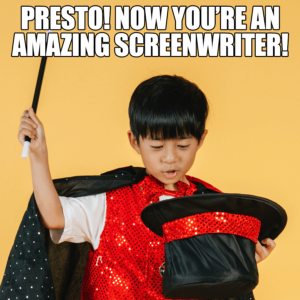 As Sun Tzu once said, “There are good screenwriters, and there are bad screenwriters.”  And while much of the difference between the two can only be measured with abstract criteria (such as “talent,” and “chutzpah,” and “originality,”)  the fact is, there are several key criteria good screenwriters do with their screenplays that are not only concrete, measurable, and observable, but also, in many instances, count more towards what makes you a “good” or “bad” screenwriter.

Here’s a few things you can do right now now to fool script readers of any stripe (professional readers, producers, agents, name talent) into thinking you’re actually one of the good screenwriters. (And by the way, there’s nothing “magic” about any of this.)

Craft a short, sweet title page for your screenplay

Whenever clients order script notes from us and send in screenplays with title pages like the one on the left, we immediately (and perhaps  magically) know that the script we’re about to read and provide notes on… Well, it’s probably not going to be good.  Or at least a big pain to read. Big fonts, mixed fonts, logline, note to the reader, too much contact information, a fabulous recipe for beef tartar… Title page A does everything wrong.

Title Page B, on the other hand, is sparse.  And sparse reads as “pro” when it comes to screenplay title pages.

By surreptitiously boosting the top and bottom margins to .5″, and squeezing down the line spacing from 100% to 85% (in Movie Magic Screenwriter, for example), you might think you’re being sly, or subtle, or any other of the Stallone family, but what you’re really doing is sending a signal to the person reading your script.

And that signal is:  noob-weenie. What is a “noob-weenie?” It’s a rare hybrid species, resulting from the mating of a noob with a weenie. You’re welcome.

(PS If Frank Stallone is the one reading your script, I can’t help you.)

Leave the cheating alone. In Movie Magic Screenwriter, there’s a function for it.  In Final Draft, you have to dig a little and adjust each element’s paragraph/margins, but it’s still doable.  Other screenwriting programs have cheat functions too. Either way, it’s the hack’s way of trying to fool some of the people all of the time.

Make sure your characters all have very different names

“You call that screenwriting advice?  ‘Change the names’?! I can get better advice at the Jiffy Lube.”

Withhold your Jiffy Rage for a jiffy and let me explain.

If your script’s got a PAMELA and a PAULA and a PENNY, you’re making your script reader (read: potential producer, potential agent) work too hard to keep names and characters straight.

Worse still?  If they’re all similar in description, or serve in similar function to the story. (e.g. all three are girlfriends or best friends or each carries an array of armor-piercing tank rockets on their back.)

Distinguish your characters with their dialogue and their action, yes, but a singularly simple thing you can do right now to help keep your characters straight in the mind of script readers or people giving you script notes is change similar sounding names.  Rudimentary, yes, but the net effect on a reader’s comprehension of your screenplay can be massively positive.

Tighten up your scene headings (vital info only!)

Sluglines aren’t your personal diary. They’re quick flashes of time and place to orient the reader. Think of them as comic book frames, or opportunities to save the reader on eye fatigue and confusion, not micro-novellas.

On every page, give the script reader a reason to believe in you

Recommending a script you’ve read isn’t easy. You’re basically saying to another human in the film industry “Hey, you know how there’s a buttload of terrible scripts floating around Hollywood, in piles, in inboxes, never read, or thrown across the room because of how bad they are?  Well, I’ve found one that goes against all that, and I’m willing to put my name and face behind it by saying as much.”

Some people don’t pass scripts along or recommend them unless it can make them look good, or at least not look bad.

A screenplay or teleplay that’s recommendable is one which absorbs the reader, commands her attention, surprises her on every page, or every few pages at least.

Make sure your screenplay is talking to a script reader, whether that reader is an agent or name actor or producer or even an intern.  Make them believe in you with every page.

The screenplay is not about you; it’s about the audience.  See the script through your first audience’s eyes – the reader. Make them all too happy to like your screenplay by ensuring them they’re in the presence of a professional screenwriter who, on every page, is keeping their attention.

That attention can be lost by failing to create engaging characters, or strong dialogue, or a plot that makes sense, yes. But it can be lost by things as simple, and perhaps as ridiculous, as trying to cheat a margin, or confusing the reader with too many characters whose names begin with a B.

Convey your professionalism, your uniqueness, in every line. The text of your screenplay is important, but the meta text can be just as important. Your characters are saying one thing, but you need to be speaking to a reader.

And what you need to be saying is “You’re in good hands. Relax and enjoy the story. I got this.”